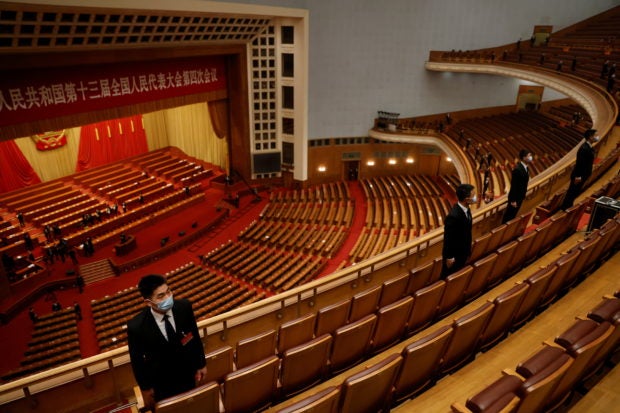 Security personnel keep watch at the end of the opening session of the National People’s Congress (NPC) at the Great Hall of the People in Beijing, China March 5, 2021. REUTERS/Carlos Garcia Rawlins

HONG KONG — Elections for Hong Kong’s legislature will likely be deferred for a second year to September 2022 as Beijing plans a major overhaul of the city’s electoral system, a severe blow to remaining democratic hopes in the global financial hub.

The delay, which South China Morning Post and other local media reported on Friday, citing unnamed sources, would be in line with a new effort by Beijing to ensure “patriots” are in charge of all public institutions in the former British colony.

Zhang Yesui, a spokesman for the National People’s Congress, said on Thursday it had the constitutional power to “improve” Hong Kong’s system and a draft decision would be discussed during the annual parliamentary session which opens on Friday.

Chinese Premier Li Keqiang said in his government work report delivered to parliament on Friday that China will “resolutely guard against and deter” interference by external forces in Hong Kong’s affairs.

Most high-profile pro-democracy politicians and activists are either in jail or in exile after authorities cracked down on mass anti-government protests in 2019, culminating with the imposition of a national security law last year.

Still, Beijing is keen to eliminate any possibility of the opposition affecting the outcome of elections in Hong Kong, whose return to Chinese rule came with a promise of a high degree of autonomy.

Hong Kong Secretary for Mainland and Constitutional Affairs Erick Tsang has defined “patriotism” as “holistic love” for China, including the leadership of the Chinese Communist Party.

Riding high on the back of the 2019 protests, the democratic camp had some slim hopes of winning an unprecedented legislative majority in 2020 elections, which the government postponed, citing the coronavirus.

But with some political parties disbanding and pro-democracy politicians in jail, it is unclear what shape any future opposition will take in Hong Kong and how its message could fit with the patriotic loyalty demanded by the Communist Party.

Hong Kong’s Cable TV and Now TV, citing unnamed sources, said changes expected in the electoral overhaul would include increasing the size of a committee to select Hong Kong’s leader from 1,200 to 1,500, and the city’s legislature from 70 to 90 seats.

Currently half of the 70 seats in the Legislative Council are directly elected, a proportion which is likely to shrink once the new changes are implemented. The other half represents industries, unions, and professions and is largely stacked with pro-Beijing figures.

The representation of community-level district council officials in both the election committee and the legislature is also likely to be scrapped, media said.

District councils are the only fully democratic institution in Hong Kong, and almost 90% of the 452 district seats are controlled by the democratic camp after it humiliated the establishment in a 2019 vote. They mostly deal with mundane issues such as bus stops and garbage collection.

Overall, the moves will reduce democratic representation in both the Legislative Council and the election committee, which must convene before Chief Executive Carrie Lam’s five-year term ends in July next year.

Beijing promised universal suffrage as an ultimate goal for Hong Kong in its mini-constitution, the Basic Law. The upcoming changes are widely seen as a major step in the opposite direction.

A broader use of patriotic oaths is also expected to enforce loyalty – action which has already been used to disqualify some democratic politicians from the legislature and is likely to be used to oust many of the district councillors.

While critics say the new security law has been used to crush dissent and curb freedoms, Beijing and Hong Kong officials say it was vital to end the 2019 violence and fend off manipulating “foreign forces.”

A Hong Kong government spokesman backed the prospect of electoral changes, saying that only through “patriots governing Hong Kong” could the Central Government’s overall jurisdiction be implemented, securing the stability of the city.