Nepal: How one hotel is providing an excellent example of accessible tourism 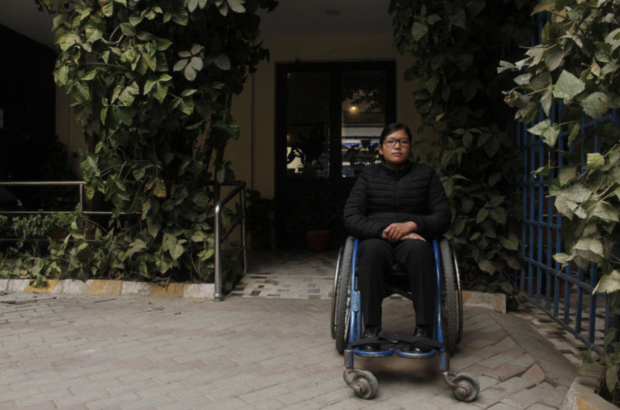 The Kathmandu Post / ANN
Yami Jhakri Magar, who lost sensation in both her legs after a spinal cord injury and works as a hotel’s front desk officer

KATHMANDU — Every morning at 9 a.m., Yami Jhakri Magar, a front desk officer at Hotel Hardik, navigates her wheelchair on the busy road of Bagbazar. The distance from her home to her workstation is less than 10 minutes. However, because both the road and her home are inaccessible for a wheelchair user like her, getting to work every day is a struggle.

But when she reaches office, her things are strikingly different. She easily moves around and does everything on her own.

“When I come to my workplace, it feels like heaven to me. I can do anything and move around the way I want to,” says Magar, who lost sensation to both her legs after a spinal cord injury and has been working in the hotel for the past five years. “Even my own home isn’t this accessible. I feel like an independent human being here.”

Opened in 2011, Hotel Hardik is a rare Kathmandu establishment. It not only provides jobs to people with disabilities, it is actually friendly and accessible for wheelchair users like Magar. The rooms, toilets, washrooms, seminar and conference halls, and hallways are all wheelchair friendly.

“Even within minority groups, the issues of people with disabilities are often overlooked and are in low priority,” says Sagar Prasai, disability inclusion specialist and the founder of Diverse Patterns, an organization that provides inclusion and diversity-related consultancy services.

And in a landscape where the hospitality and tourism industry undervalues the need for inclusive and accessible tourism, Hotel Hardik is an exception.

“The main reason why we decided to make our hotel wheelchair friendly was because we were motivated to cater with dignity and respect to everyone, especially those who are often neglected by the hotel and tourism industry,” says Ramesh Pandey, manager of the hotel.

This change in attitude came after Pandey took over the position of manager. He noticed that whenever the hotel hosted seminars and conferences, many people in wheelchairs had difficulty participating. “Since there were no ramps, wheelchair users had to be carried inside the halls,” says Pandey.

Inspired and driven to make the halls accessible to wheelchair users, as he wanted all of his guests to feel equal, Pandey made an effort to build a ramp in one of the halls so wheelchair users could enter without any difficulty.

Recalling an incident that played a major motivating factor in his journey of making the hotel accessible to wheelchair users, Pandey vividly recalls a particular incident that opened his eyes regarding how wheelchairs users had to face discrimination regularly.

“In one of the lunch breaks of a program, which my hotel was hosting, I saw a wheelchair user sitting nearby quietly. When I asked him why he wasn’t eating, he replied that he had gastrocolic reflex, meaning he had to use the toilet after every meal. Since the toilet in the hotel wasn’t accessible to him, he was skipping his meal,” says Pandey.

This incident deeply affected Pandey, he says. “It was an eye-opening experience that helped me see things from the perspective of wheelchair users. That’s why just after we bought a property next to our hotel in 2014, we decided to make a wheelchair-friendly public toilet so all of our guests, as well as the public, could use it and face no problem,” says Pandey.

With the help and technical guidance from Ananta R Vaidya, a California-based engineer who had expertise in accessible infrastructure, Pandey then went to make many changes in the hotel to make it wheelchair friendly.

New ramps that met international standards were created. The surface of the ground from parking to lobby to the meeting halls and the bedrooms were made smooth. Likewise, even the entrance gate and the hallways were widened so the wheelchairs could easily pass.

Since the hotel had no elevators, the ground floor was designated for wheelchair users and about four rooms out of the 34 rooms of the hotel were reconstructed and designed in such a way that a wheelchair user could easily move around and enjoy their stay peacefully, in comfort.

“We made sure that the designs of the room and our infrastructure were wheelchair friendly in every way. So, from the switch buttons in the rooms to attached bathrooms with grab rails, to the height of the basin and even the bed, everything is designed as per the requirement of wheelchair users,” says Pandey.

And according to Pandey, all of these infrastructural changes and reforms did not cost them a fortune and that other hotels in the Valley can make the changes too — if they have intentions to do so.

“Most of the hotels have the misconception that making their rooms or space wheelchair friendly and accessible will cost a lot of money,” says Pandey. “We can make changes and reforms at a nominal cost as well. It’s just that we need to be more conscious and think from a multidimensional perspective and focus on inclusivity while we design our infrastructures.”

What started out as a way of paying respect and ensuring the comfort of all kinds of guests, who are staying or visiting their hotel has changed now. According to Pandey, the hotel is now planning to collaborate with engineers to develop a software which will allow blind people to navigate the hotel’s premises during their stay.

Likewise, the hotel is also planning to address the needs of color blind people and start a new branch near Bagbazar that has more features.

“We are constantly consulting with engineers and people with disabilities as we want to create more accessible infrastructures,” says Pandey. “At the end of the day, hotels are home away from home for travellers. That’s why it is a moral imperative for the tourism and hospitality industry to make sure they open doors for everyone including people with disabilities.”

For their effort and contribution in trying to promote accessible tourism in Nepal, Hotel Hardik has won many awards and recognition. In 2018, the National Federation of the Disabled, Nepal, along with various organizations awarded the Innovation Award to the hotel for making initiatives in promoting access to people with disabilities.

The accessible infrastructure has not only helped the hotel achieve its mission of opening their doors to all guests and treat them equally and with dignity, according to Pandey, it has also helped increase business.

“When we were not wheelchair friendly, we normally used to have 40 to 50% occupancy. But now occupancy has gone up to 60 to 70%,” says Pandey.

According to him, the hotel receives booking from wheelchair users from all corners of the country including Banke, Doti, Dadeldhura and other remote districts as well. Guests with disabilities can also avail of a 50% discount, which means they end up paying around Rs 1,000 per night.

Likewise, many international travellers who are wheelchair users have also booked and stayed at their hotel too, says Pandey, which according to him is a reflection of how hotels can benefit if they open to all kinds of tourists and make their place accessible.

“Our hotel industry and hospitality industry have neglected people with disabilities and missed many opportunities. However, if we start providing accessible services to them, we can get tourists from all over the world,” he says.

But for a big change to happen in the sector, according to Prasai, the concept of accessibility should be universally accepted. “The onus shouldn’t only be on the hotels. We also need to make sure that every tourism operator strives for accessibility. Tourism shouldn’t be only about luxury. It’s a basic right which everyone should have access to,” says Prasai.