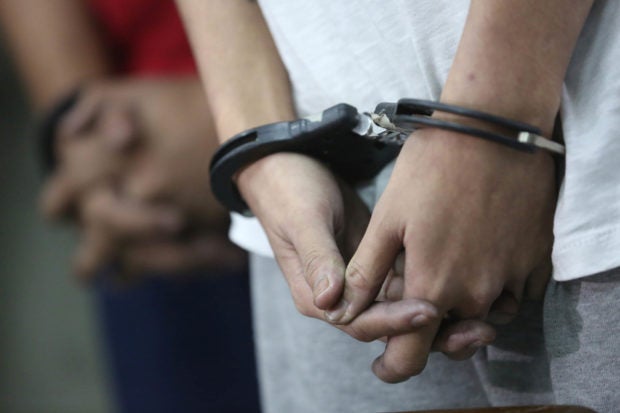 GUILTY UNTIL PROVEN INNOCENT The amendments to the dangerous drugs law would make it harder for suspects to prove their innocence as the burden of proof shifts to them, according to human rights advocates.
—INQUIRER FILE PHOTO

MANILA, Philippines — Human rights advocates on Wednesday called on the House of Representatives to withdraw a bill amending the dangerous drugs law that they said would apply the presumption of guilt on some drug suspects in violation of the Constitution.

Surigao del Norte Rep. Robert Ace Barbers, chair of the dangerous drugs committee, sought to ease fears of critics that House Bill No. 7814 would disregard due process and shift the burden of proof in a drug case to the accused.

Lawmakers on Tuesday voted 188-11, with nine abstentions, to approve the measure, which includes legal presumptions on who are to be considered, among others, as importers, financiers, protectors or coddlers of illegal drugs.

If the bill becomes law, it will set alarming legal precedents that not only violate the Constitution but also the country’s legal obligations under international laws, the rights advocates said.

The proposed law is an “obvious violation of the principle of presumption of innocence and fair trial,” said Butch Olano, Philippine section director of Amnesty International.

He cited the bill’s lack of judicial supervision, which “encourages” the arbitrary arrest and detention of drug suspects.

Olano believes the passage of the bill was a “knee-jerk reaction” to last week’s shootout between police officers and agents of the Philippine Drug Enforcement Agency (PDEA) that killed four people.

That incident was “more an issue of government intelligence-gathering and protocols than of the law,” he said.

“The country’s law enforcement problem demonstrates the state’s failure to ensure people’s protection from crimes, whether drug- or terrorism-related,” he said. “Passing laws that institutionalize disregard for human rights only further inundates a population already exhausted by the impacts of the pandemic.”

“Arguments against the bill should have ended with the uniting principle of upholding due process and the right to equal protection of the law,” he added.

‘Back to dark ages’

Former Akbayan Rep. Loretta Ann Rosales, who was also chair of the Commission on Human Rights, said the bill was a “march back to the dark ages.”

She warned that it would only trap people “with little to no resources to a system that has already presumed their guilt.”

“The law will fully destroy what remains of the country’s rule of law. It would put the lives of many people in serious harm without due process or evidence,” she said.

But Barbers said the presumption of innocence would not be discarded with the proposed amendments to Republic Act No. 9165, or the Comprehensive Dangerous Drugs Act.

“The presumption of innocence means that the burden of proof is always on the government to satisfy that [the] accused is guilty of the crime beyond a reasonable doubt. The burden to prove the guilt of the accused does not change as it remains with the state or the prosecution,” Barbers said in a statement on Wednesday.

He added that such “legal presumptions” in the proposed amendments to the antidrug law were “not conclusive” and were still needed to be established by the prosecution during a trial.

Following Tuesday night’s approval of the bill, several representatives who opposed the amendments explained their “no” votes.

Quezon City Rep. Jesus Bong Suntay, the House human rights panel chair, said he fully supported the administration’s antidrug campaign. “However, as a lawyer, I do not want to send the wrong message to the Philippine Drug Enforcement Agency, to the police authorities and the prosecution that an accused may now be convicted on mere presumptions,” he said.

Quezon City Rep. Jose Christopher Belmonte was concerned over the “presumptions and presumptions on presumptions” included in HB 7814, warning that “many innocents will be endangered by wrong assumptions.”

“Most likely, ordinary Filipinos who have no involvement and victims who were only used will be the ones to bear the brunt of this law, and not the real drug lords and drug syndicates who should answer for their crimes,” Belmonte said.

“For me, the most important assumption in our Constitution is the ‘presumption of innocence.’”

Bayan Muna Rep. Carlos Isagani Zarate, one of the original authors of the measure, withdrew his authorship.

“In this measure, the ordinary Filipino citizen who is accused, falsely or not, will have the state’s machinery as his enemy,” he said.

Barbers, on Wednesday, maintained that it is the drug lords who should fear the proposed amendments, not ordinary, law-abiding Filipinos.

The bill is a consolidation of 11 measures aimed at strengthening drug prevention and control, one of the key programs of the Duterte administration.

The amendments will provide the government a bigger net to hold more people responsible for the drug trade in the country.

Suntay said there were 20 “presumptions” mentioned in the bill. These presumptions identified the people who could be held liable in drug cases, including importers and “coddlers” or protectors of drug dealers.

Until proven otherwise, the bill says, any person is “presumed to have imported or exported” dangerous drugs if he or she had “possession or under his/her direct or indirect control any purchase order, memorandum receipt, delivery receipt, bill of lading, or any similar document containing information related to or in connection with importation or exportation to or from the Philippines dangerous drugs and/or controlled precursors and essential chemicals.”

Again, unless disproved, “any person found or is present within the immediate vicinity of the area of sale, trading, marketing, dispensation, delivery or distribution, is presumed to have been involved in the sale, trade or distribution of dangerous drugs, controlled precursors or essential chemicals.”

A person is “presumed to be a financier if he/she causes the payment, raises, provides or supplies money for or underwrites the importation or exportation of dangerous drugs or controlled precursors and essential chemicals,” the bill said.

A presumed “protector or coddler” is someone who “knows the importer or exporter of dangerous drugs and/or controlled precursors and essential chemicals, and he/she uses his/her influence, power or position to shield, harbor, screen or facilitate the escape of said importer or exporter.”

Another presumed protector or coddler is one who “has knowledge of or has reasonable ground to believe that the violator is an importer or exporter of dangerous drugs and/or controlled precursors and essential chemicals, and he/she uses his influence, power or position in preventing the arrest, prosecution or conviction of the importer or exporter.”

The bill would also penalize negligent lessors whose properties, such as houses or apartments, are used as clandestine drug laboratories, unless they can show documents that will exempt them from liabilities.

“In any sale or lease of property, it is the duty of the owner of record or his/her authorized representative to disclose actual knowledge of prior use of the property as a clandestine laboratory to the buyer or lessee,” one of the amendments read.

It directs lessors to “include in the lease contract a stipulation that the property being leased will not be used for the illicit manufacture of dangerous drugs and/or controlled precursors and essential chemicals in violation of this act.”

Also, the proposed amendment will hold as “criminally liable as coprincipal” the estate administrator, among other officers of a company that owns any property, who “tolerates” the use of the property as a venue to commit drug crimes.

Barbers said PDEA data showed that since 2013, no suspect has been arrested or charged as a protector, coddler or financier in the illegal drug trade.

He said the primary reason for pushing the amendments was to plug loopholes and correct flaws in existing laws and to “add more teeth” to the antidrug campaign.