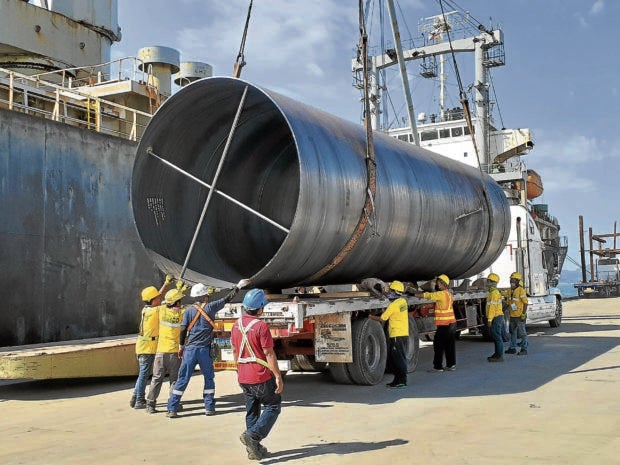 BRIDGE FOUNDATION A shipment of 37 giant steel pipes that will be used to build the foundation of the Panguil Bay bridge arrives at Iligan City. The 3.7-kilometer bridge, a flagship project of the government, will link the provinces of Lanao del Norte and Misamis Occidental. —PHOTO COURTESY OF PHILIPPINE PORTS AUTHORITY

TUBOD, Lanao del Norte, Philippines — Construction of the bridge that will cut down travel time between this capital town of Lanao del Norte province and Tangub City in Misamis Occidental is going full blast this week with the delivery of the first batch of steel pipes to be used for its foundation.

Lanao del Norte Gov. Imelda Dimaporo said a shipment of 37 steel pipes that arrived at Iligan City port aboard a vessel from South Korea was the first in four delivery batches of materials that would be used for the 3.7-kilometer Panguil Bay bridge.

Dubbed the “Bridge of Peace and Unity,” the P7.4-billion bridge would reduce travel time from Tubod to Tangub to only seven to 10 minutes from the current two hours and a half.

Its construction, however, has been delayed for about a year because of the COVID-19 pandemic, which restricted the movement of people and goods, Dimaporo said.

“This is a dream come true,” she said, noting that the project was first conceptualized by the late former Gov. Arsenio Quibranza and the late Misamis Occidental Gov. Alfonso Tan to spur economic activities between the two provinces.

When completed, the bridge would become the country’s longest bridge, breaking the record of the 2.16-kilometer San Juanico bridge that connects Samar and Leyte provinces in Eastern Visayas region.

The government has signed a loan agreement with the Korean Export Import Bank to finance the project.

Dimaporo said the construction of the Panguil Bay bridge, one of the flagship infrastructure projects of the Duterte administration, would help create jobs for locals. “This is a realization of [President Duterte’s] promise to make Filipinos even more connected through a megabridge that will spur interisland travel from Northern Mindanao to the different parts of the archipelago,” she said.