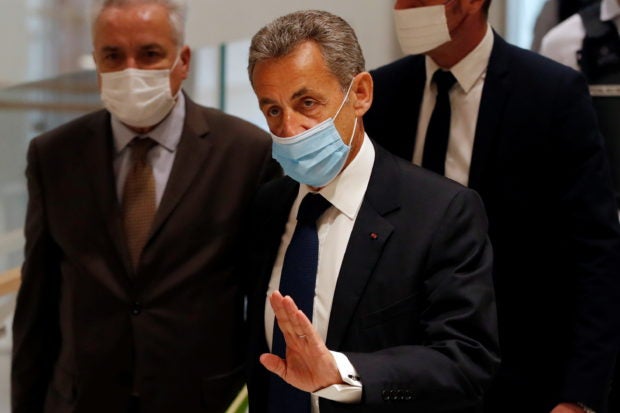 PARIS — Former French President Nicolas Sarkozy said on Tuesday he was ready to go all the way to the European Court of Human Rights to prove his innocence, his first public reaction after being found guilty of corruption and sentenced to prison on Monday.

The court found that Sarkozy, 66, had tried to bribe a judge and peddle his influence after leaving office in exchange for inside information about an investigation into his 2007 campaign finances. Sarkozy is appealing the ruling.

Sarkozy on Tuesday protested his innocence. He said he was the victim of a deep injustice, that the ruling was riddled with inconsistencies and that the political impartiality of some investigating judges was open to question.

“I appealed the decision, maybe I will have to pursue this fight all the way to the European Court of Human Rights,” Sarkozy told Le Figaro newspaper.

“That would be painful for me to have to get my own country condemned, but I’m ready to do so because that would be the price of democracy.”

Sarkozy, a conservative who led France from 2007 to 2012, was sentenced to three years in prison. However, two years were suspended and the presiding judge said she was open to him staying out of jail if tagged with an electronic bracelet for the remaining year. That decision lies with another judge.

He said he spent the evening after his conviction watching the U.S. drama series The Killing with his family.

Senior politicians from the opposition center-right have rallied to Sarkozy’s defense. Some allies previously hoped he might be drawn out of retirement to run in the 2022 presidential vote.

“Acquitted or not, it would change nothing politically,” Sarkozy said. “I had said I wouldn’t be a candidate and I stand by that.”

Read Next
AstraZeneca vaccines arriving in PH on March 4 – Palace
EDITORS' PICK
Duterte: Authorities may take over hotels, but it’s not a ‘remedy’ in a democracy
When will PH get enough COVID-19 vaccines? ‘I really don’t know,’ Duterte says
Smart introduces Smart Barkada with the launch of Double GIGA
LT Group, Inc. Notice of Annual Shareholders’ Meeting 2/2
Duterte defends govt’s efforts vs COVID in 2020
Smart is fastest 5G Network in PH – Ookla
MOST READ
‘Duterte a total failure as leader. He must step down’ – group
Duterte ‘privately’ dealing with China invasion in West PH Sea – Palace
Ramon Tulfo says gov’t running PH like a ‘headless chicken’
Stop acting like a colonizer, PH business groups tell China
Don't miss out on the latest news and information.