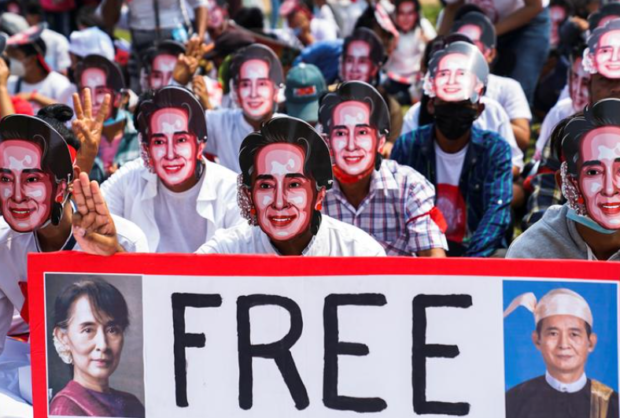 Protests against a military coup in Myanmar showed no sign of abating with more planned across the country on Wednesday, as Southeast Asian neighbors struggled for consensus in their efforts to end the month-long crisis.

Security forces fired warning shots into the air as protesters gathered at one site in the commercial capital Yangon early on Wednesday, according to a journalist at the scene.

At least 21 people have been killed since the Feb. 1 coup against Aung San Suu Kyi’s democratically elected government, and police opened fire to break up crowds again on Tuesday.

An activist in Chin State said strikes were taking place in nearly all of its townships on Wednesday.

A group tracking arrests said dozens more people may have been detained on Tuesday, including a protest organizer who it said was taken away at gunpoint by security personnel in unmarked cars.

Myanmar’s ousted President Win Myint is facing two new charges, his lawyer Khin Maung Zaw said on Wednesday, including over a breach of the constitution that is punishable by up to three years on prison.

The Association of Southeast Asian Nations (Asean) failed to make any breakthrough in a virtual meeting on Myanmar by its 10 foreign ministers. While they were united over call for restraint, only four members – Indonesia, Malaysia, the Philippines and Singapore – called for the release of detainees including Suu Kyi.

“We expressed Asean’s readiness to assist Myanmar in a positive, peaceful and constructive manner,” said a statement by the Asean chair Brunei.

Myanmar’s state media on Wednesday said the military-appointed foreign minister attended an Asean meeting that “exchanged views on regional and international issues”, but made no mention of the purpose of the talks.

The military justified the coup saying its complaints of voter fraud were ignored. Suu Kyi’s party won the election by a landslide, earning a second five year term. The election commission said the vote was fair.

Junta leader Senior General Min Aung Hlaing has said the intervention was to protect Myanmar’s fledgling democracy and has pledged to hold new elections, but has given no time frame.

At least 21 people have been killed since the coup, which Singapore Prime Minister Lee Hsien Loong on Tuesday said was a “tragic” step back for Myanmar.

‘The revolution must succeed’

It said tear gas, stun guns grenades and electrical charges were used to disperse crowds in Yangon and 12 rioters were arrested.

After dark in parts of Yangon, people came to their balconies to chant anti-military slogans, including “the revolution must succeed”. Others banged pots and pans loudly in a nightly ritual of defiance.

Ye Myo Hein, a researcher and founder of Burma Studies Center, said security forces had fired shots in the streets to discourage people from taking part, but a few persisted.

“Afterwards, a volley of pans rattling and drum beating filled the air around our neighborhood,” Ye Myo Hein posted on Facebook.

Suu Kyi, 75, has been held incommunicado since the coup but appeared at a court hearing via video conferencing this week and looked in good health, a lawyer said.

She is one of nearly 1,300 people who have been detained, according to activists, among them six journalists in Yangon, one of whom works for the Associated Press, which has called for his release.

Myanmar’s representative to the United Nations who was appointed by Suu Kyi last week denounced the coup and after the junta announced he had been fired, he staked a formal claim as the legitimate representative, according to letters seen by Reuters.

Asean’s meeting drew criticism from inside Myanmar, with concerns it would legitimize the junta and not help the country.

Indonesia’s Foreign Minister Retno Marsudi urged Myanmar to “open its doors” to Asean efforts to ease tensions, but said there was little it could do if it did not.

Echoing the position of most Western countries, the Philippines’ Foreign Secretary Teodoro Locsin called for “the complete return to the previously existing state of affairs”.

Read Next
FDA yet to start evaluation of Sinopharm’s vaccine due to lack of documents
EDITORS' PICK
Get a chance to win 5G smartphones with Smart Signature Plans
OVP: Robredo hasn’t decided on 2022 plans yet; focus still on COVID
Tired of your Wi-Fi signal problems at home? Here’s a solution!
Marian Rivera partners with JC to boost public health awareness
Mocking PH protests, China keeps 287 vessels in West Philippine Sea
DOH reports 4,842 new COVID-19 cases
MOST READ
Mocking PH protests, China keeps 287 vessels in West Philippine Sea
Sharon Cuneta flies to LA to take some time off: ‘I need to breathe, collect myself’
Trillanes to run for president in 2022 elections
Locsin tells Roque: Drop the subject, leave foreign affairs to me
Don't miss out on the latest news and information.