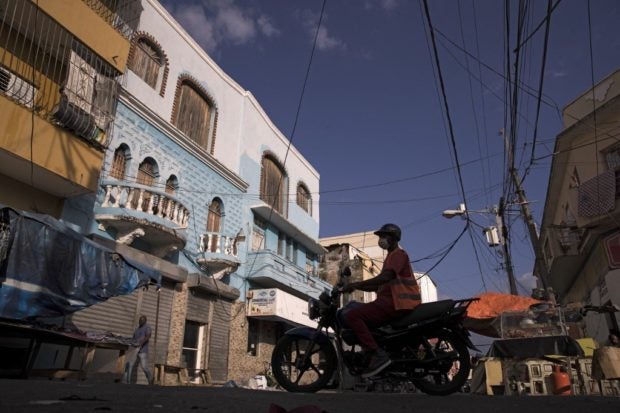 A man rides a motorcycle in a sector called “Little Haiti” in Santo Domingo, on March 1, 2021. Dominican President Luis Abinader announced the construction of a wall along the border with Haiti to reduce illegal migration. Photo by Erika SANTELICES / AFP

SANTO DOMINGO — Experts have hit out at a plan by the Dominican Republic government to build a wall on its border with Haiti to reduce illegal immigration, claiming it won’t work unless accompanied by development.

The Dominican Republic and Haiti share the island of Hispaniola, which was the site of the first European colony in the Americas. They are separated by a 380-kilometer (240-mile) border.

Dominican President Luis Abinador announced on Saturday that work on a border wall would begin in the second half of the year.

“Within two years we want to end the serious problems of illegal immigration, drug-trafficking and the transport of stolen vehicles that we’ve suffered from for two years,” said Abinader.

The relationship between the neighboring countries has historically been difficult and every time there is a new government in Spanish-speaking Dominican Republic, it makes tackling illegal migration from French-speaking Haiti a priority.

Almost half a million Haitians live in the Dominican Republic, which has a population of 10.5 million.

On January 14, Abinader and his Haitian counterpart Jovenel Moise signed an agreement that included a commitment to take measures against “the wave of illegal migration” and “to reinforce border security and vigilance.”

But for Juan Del Rosario, a professor at the Autonomous University in Santo Domingo, the Dominican capital, “there should not be a wall … while there remains extreme poverty and political instability in Haiti, which exerts migratory pressure.”

“You could build a 100-meter high wall and people will try to get around it,” Del Rosario told AFP.

For William Charpentier, the coordinator of an independent migrant and refugee body, the wall would be an “unnecessary expenditure” that could be better spent elsewhere.

“They need to increase development projects” that benefit both Dominicans and Haitians in border areas, he said.

But many in the country support the idea of a wall.

“I think it’s good because here in the Dominican Republic there are already many Haitians, it’s full. You can’t even get a doctor’s appointment because it’s full of Haitians everywhere,” Lucia, a 23-year-old student, told AFP.

“I think it would be good because then you can control migration from one country to another, there won’t be as many problems as there could be,” said unemployed Antonio Mejia, 62.

“All this will benefit both countries.”

Charpentier says that the idea of building walls between peoples awakens “resentment, xenophobia and racism.”

Del Rosario points to the barrier former US president Donald Trump vowed to build on the southern border with Mexico as an example for why walls don’t work.00000

“With greater resources and technology, it was impossible” to build it, he said.

The Trump administration claimed to have built more than 650 kilometers of wall but according to the BBC, only 130-kilometers of that was a new wall, the rest replaced existing structures.

The border itself is more than 3,000-kilometers long.

Charpentier says migrants face “permanent persecution” due to the mass deportations of those that are undocumented, while even legal migrants face difficulties in renewing documents and renting homes.

Yet border areas are dynamic with people crossing regularly for work or to sell goods.

“Contrary to what you might think, the money is on the Haitian side and the goods are on the Dominican side,” said Del Rosario.

“There’s an informal exchange which cannot be considered contraband … if that’s blocked, there will be internal migration flows” from border regions to the big cities.

Agriculture and construction both rely on foreign laborers, adds Josue Gastelbondo, the head of the International Organization For Migration office in Santo Domingo.