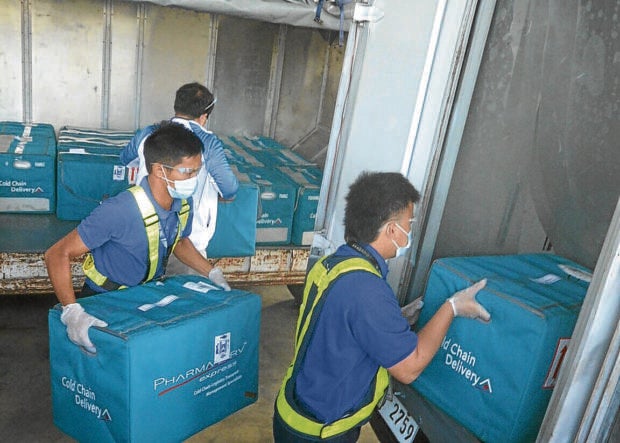 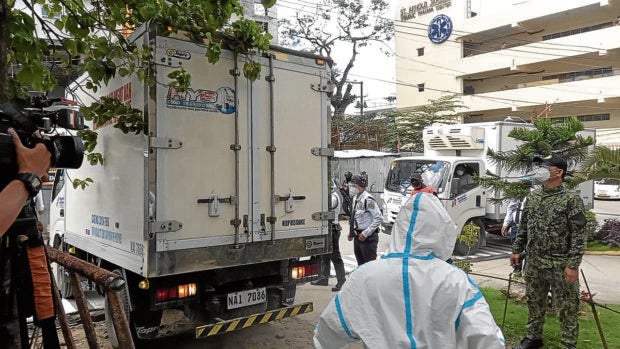 MAJOR DELIVERY Thousands of doses of donated COVID-19 vaccines from China arrive in Davao City (top) and Cebu City on Tuesday as these major urban centers in Mindanao and the Visayas start their vaccination drives this week. —PHOTOS BY BING GONZALES AND DALE ISRAEL

BAGUIO CITY, Benguet, Philippines — Mayor Benjamin Magalong has urged national officials to put up an equitable system for the vaccine rollout now that a shipment of COVID-19 vaccines donated by the Chinese government has reached the country.

Magalong on Jan. 10 signed a purchase deal with British pharmaceutical company AstraZeneca for 380,000 doses. In the Cordillera region, Baguio is the only local government which placed an order with AstraZeneca, the mayor said.

“The other towns and cities would need to wait for vaccine allocations from the national government while we in Baguio get vaccinated. Is that fair?” asked Magalong during the city council session on Monday.

He said he had anticipated that the problem of equitable distribution of vaccines would arise among communities that could afford these and those that could not.

The mayor had resigned as the country’s lead contact tracer, but said he would fulfill his task until his replacement was appointed.

Magalong said his suggestion for vaccine equity was still being reviewed by the national government and by the vaccination committee of the Inter-Agency Task Force for the Management of Emerging Infectious Diseases (IATF) on COVID-19.The mayor said Baguio might give up its surplus vaccines so these could be given to other local governments should Malacañang or the IATF enact a uniform sharing program for vaccines.But the national government would need to cover Baguio’s vaccine expenses, Magalong said.The city council last week allocated P195 million for the local vaccine program.

Magalong said the city government paid P18 million in advance and is expecting supplies to arrive by June or August.

He said a substantial amount of Baguio’s vaccine expenses could be returned to the city if the national government or other towns required its extra vaccines.

“We can’t sell the vaccines we are buying, but we can have them replaced in the form of donations,” Magalong said.The doses bought by Baguio would be sufficient for the city’s adult population of 194,000. They make up 70 percent of residents who are eligible to receive shots.

“We fought to get the maximum number of doses. We insisted on it,” Magalong said.

The mayor said the city is also entitled to vaccines from the national government, including supplies from American drug maker Pfizer and AstraZeneca that would be released through the World Health Organization’s COVID-19 Vaccines Global Access (COVAX) Initiative. COVAX gives out vaccines provided by wealthier nations for underdeveloped countries.

In Cebu City, at least 7,200 doses of Sinovac vaccines for health-care workers in the city’s biggest government hospital arrived on Tuesday morning.

Melquiades Feliciano, chief implementer of the Inter-Agency Task Force Against COVID-19 for the Visayas, said the vaccines would be stored at the Vicente Sotto Memorial Medical Center (VSMMC) laboratory until Thursday’s vaccination drive.Dr. Gerardo Aquino, VSMMC director, said only 600 of the hospital’s 2,900 health-care workers and staff members were willing to be vaccinated with the Chinese vaccine but he hoped the number would increase.“I, too, will be vaccinated with Sinovac. I hope to convince at least 50 percent of hospital workers to receive the Sinovac vaccines,” he said.

Aquino said all 2,900 VSMMC workers earlier wanted to be vaccinated after being informed that they would get the Pfizer vaccine. When news came out that they will be inoculated with the Sinovac vaccine, the number dropped.

Cebu City, the second-biggest metropolitan area outside of Metro Manila, remains among the major cities in the Visayas that do not have a tripartite deal with other brands. Smaller cities, including Ormoc, Bacolod and Iloilo, have signed agreements with AstraZeneca apart from the vaccines allocated by the national government.

The city government has earmarked P400 million for the purchase of COVID-19 vaccines. A P100-million supplemental budget is expected to be passed to augment it.

Mayor Edgardo Labella assured residents of the city that they would be given the option to choose a brand of vaccine once they start mass vaccination.Police Col. Josefino Ligan, director of the Cebu City police, said all 1,100 policemen in the city were willing to get CoronaVac shots.

Mayor Sara Duterte said these would be enough for 6,000 people, most of them health-care workers at Southern Philippines Medical Center (SPMC).

According to Dr. Ashley Lopez, Davao City COVID-19 focal person, the shipment will be kept at a cold storage of the Department of Health until Friday, when Health Secretary Francisco Duque III and Secretary Carlito Galvez Jr., head of the National Task Force Against COVID-19, arrive in the city to lead the vaccination drive.Dr. Ricardo Audan, officer in charge and medical chief of SPMC, will lead the inoculation of some 4,000 health-care workers, mostly nurses and doctors, on Friday.In Cotabato City, officials of the Bangsamoro Autonomous Region in Muslim Mindanao (BARMM) said they were expecting the region to have preferential allocation as the China-made vaccine had already been certified by Indonesia’s halal-certifying body.