In confidence-building bid, Army chief first to get CoronaVac injection 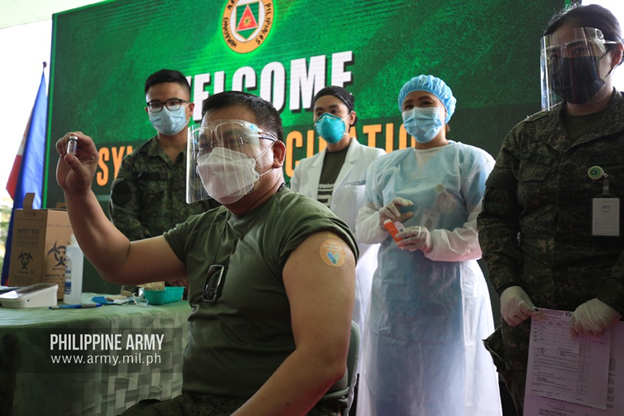 Army chief Lt. Gen. Jose Faustino Jr. on Tuesday (March 2) gets the first dose of CoronaVac, the vaccine made by Chinese firm Sinovac Biotech, in a bid to promote confidence on military’s vaccination drive. OACPA

MANILA, Philippines—Army chief Lt. Gen. Jose Faustino Jr. on Tuesday (March 2) got the first dose of CoronaVac, the vaccine made by Chinese firm Sinovac Biotech, in what was deemed as a confidence-building gesture at the rollout of the military’s vaccination drive.

Faustino could be the highest ranking Philippine military officer to be legally injected with the vaccine so far.

“Remember that being inoculated is our duty to the country and to the Filipino people whom we have sworn to serve and protect,” the Army chief was quoted as saying.

The vaccine will be distributed to 5,000 men and officers in the next 15 days and planning for the nationwide vaccination rollout for all 18 Army hospitals nationwide is underway, the Army said.

“The target today is to vaccinate at least 30 medical health workers in each of the hospitals in the four camps named,” AFP spokesperson Maj. Gen. Edgard Arevalo said.

The Philippine government received 600,000 doses of CoronaVac on Sunday (Feb. 28) with 100,000 of it allocated to the Department of National Defense and AFP.

Within the military, some members of the Presidential Security Group had been injected last year with Sinopharm, the vaccine made by a China state-owned company, long before the government’s vaccination program started.

AFP chief Lt. Gen. Cirilito Sobejana earlier said that vaccination for SARS Cov2, the virus that causes COVID-19, was mandatory for all AFP personnel, including civilian employees. Those who would not want to be injected with CoronaVac could choose another vaccine but at their expense.

Sobejana earlier said he was not getting the vaccine in the meantime as medical workers on the frontline should get it first.