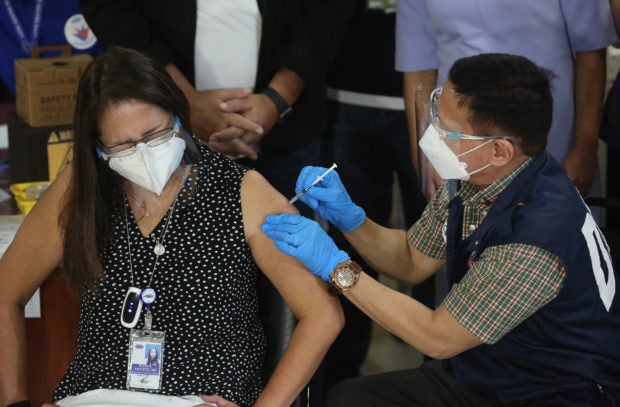 MANILA, Philippines — For government officials, the hundreds of COVID-19 shots given to health workers on Monday as the country launched a delayed vaccination drive were a promise of an end to one of the most stubborn coronavirus epidemics in Asia.

But the country’s failure to secure early supplies of better vaccines was not lost even among the health workers who willingly took the China-made CoronaVac shots that had been found to be only 50.4 percent effective among people like them who directly handled coronavirus cases and therefore were at high risk of catching COVID-19.

Most of them, including Dr. Eileen Aniceto, 59, chief of the Emergency Medicine and Outpatient Department of Lung Center of the Philippines in Quezon City, had signed up to receive the US-made Pfizer vaccine, which along with the vaccine of the US pharmaceutical company Moderna, had the highest efficacy rating among the candidate jabs for COVID-19, at 90 percent.

But after watching many of her patients die from the severe respiratory disease, Aniceto decided to line up for whatever vaccine arrived in the Philippines first.

“I saw a lot of patients who died isolated in their rooms, without their relatives by their side,” Aniceto, a pulmonologist, said. “[Dying alone] is worse than just dying.”

And so on Monday, Aniceto was first in line at Lung Center to take CoronaVac, 600,000 doses of which were donated by China to the Philippines and delivered by a Chinese military plane on Sunday.

Aniceto received the CoronaVac shot from Health Secretary Francisco Duque III, who is disqualified to get the jab made by China’s Sinovac Biotech, having surpassed the maximum age for it, 59. Duque is 64.

Dr. Vincent Balanag, executive director of Lung Center, said the hospital expected to receive 600 doses of CoronaVac, which would be given to 300 workers, within the week.

So far, however, only 150 employees of the hospital have signed up for the free jabs, as more than 90 percent of the Lung Center staff have expressed a preference for the Pfizer vaccine, Balanag said.

“But we’re confident we can get more people on board,” he added.

In a speech at the launch of the vaccination drive, Duque called on the Lung Center staff to “stop worrying and being scared” of CoronaVac, which he stressed had received emergency use authorization from the Food and Drug Administration (FDA).

“The benefit-to-risk ratio [for CoronaVac] is really significant,” he said. “This is the key to regaining our sense of [normality].”

“The best vaccine,” Duque added, quoting US epidemiologist Anthony Fauci, “is the vaccine that is available.”

Lung Center is a key fortress in the battle against COVID-19 in the Philippines. It is one of only three COVID-19 referral hospitals in the country. The other two are Philippine General Hospital (PGH) in Manila and Dr. Jose N. Rodriguez Memorial Hospital (also known as Tala Hospital) in Caloocan City, which, together with three other hospitals in Metro Manila, also received doses of CoronaVac for their workers.

Only 178 of the 1,911 health workers at Tala Hospital chose to be vaccinated with CoronaVac. Dr. Alfonso Victorino Famaran Jr., the hospital’s medical chief, said 90 percent of the hospital’s staff preferred the Pfizer vaccine.

Famaran said the hospital received 600 doses of CoronaVac, of which only about 400 would be used. The rest would go to other government hospitals for their own staff willing to receive the Chinese vaccine.

Secretary Carlito Galvez Jr., who handles procurement for the government’s vaccination program, took a CoronaVac shot at PGH, where he announced that the Philippines would get 1 million doses more of the vaccine at a cost of P700 million.

The funds for the supply, Galvez said, were ready and that the purchase order would be signed soon. The vaccines would be delivered in two batches, he said.

Galvez lashed out at critics who he said were spreading “fake news” that CoronaVac was no good.

Getting vaccinated “is a moral obligation for everyone,” Galvez said. “We should not wait for what we call the best vaccine . . . The best vaccine is the one effective and efficient which has already arrived,” he said.

The CoronaVac shots, according to Galvez, were “doses of hope.” 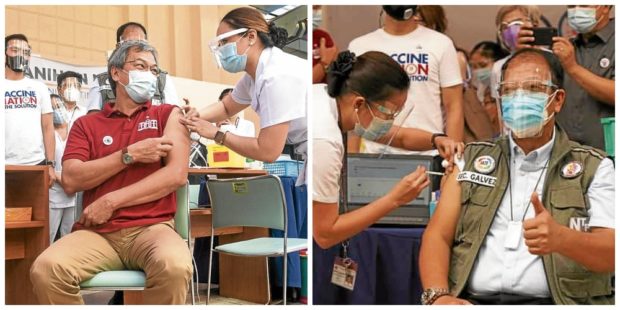 FIRST IN LINE Dr. Gerardo Legaspi, director of Philippine General Hospital, is first to receive the China-donated CoronaVac as the Philippines rolls out its vaccination drive on Monday. At right, Secretary Carlito Galvez Jr., head of the National Task Force Against COVID-19, joins government officials inoculated during simultaneous programs in several hospitals in Metro Manila. (Photos courtesy of the Manila Public Information Office and the Presidential Communications Operations Office)

The Philippines is playing catch-up with its Southeast Asian neighbors despite having one of the region’s worst coronavirus problems.

It was the last to start its immunization program due to delays in procurement, and when it finally got to start its vaccination drive, it was amid a fresh surge in COVID-19 cases.

Four more patients had died, raising the death toll to 12,322, the DOH said.

The country had been expecting a bigger launch of the immunization drive, but delivery of 500,000 doses of the AstraZeneca vaccine from the global procurement pool COVAX, which had been scheduled for Sunday, was delayed for a week due to a supply problem.

Galvez said there was a “very acute shortage” of vaccines because of tight competition among countries for supplies.

To get vaccines, he said, the Philippines is offering to pay more. “We are hiking the price to have [the manufacturers] deliver [the vaccines] early,” he said.

Galvez said the talks with AstraZeneca, whose vaccine many local governments had ordered, were already finished.

He said he would resume negotiations with Moderna on Monday and later with Johnson & Johnson. Next week, he said he would travel to India to sign supply agreements for the Novavax and Covishield vaccines produced by the Serum Institute of India. Covishield is the brand name in India of the AstraZeneca vaccine.

The government, Galvez said, expects to get about 5.1 million vaccine doses in the first quarter—the 600,000 CoronaVac doses already donated by China, 1 million doses more of the same shot still to be procured, and 3.5 million doses from COVAX.

US Ambassador to the United States Jose Manuel Romualdez said in a television interview on Monday that the Philippines had reserved 6 million doses of the single-shot Johnson & Johnson COVID-19 vaccine, which had just received emergency use approval from the US FDA.

“We are talking with Johnson & Johnson … we have 6 million doses reserved,” Romualdez said. “These will arrive in the second half of this year.”

The government aims to inoculate 70 million of the 108 million population this year to achieve herd immunity and reopen the economy that in 2020 saw its worst contraction on record, due largely to tight restrictions on movement in place since March last year.

Of the allocation for the military, 30,000 doses went to Department of National Defense bureaus and 70,000 to the Armed Forces of the Philippines.

In the defense bureaus, Defense Secretary Delfin Lorenzana said only about 14,000 people out of 29,000 personnel were willing or eligible for the CoronaVac shots.

By 3 p.m. on Monday, 353 health workers, defense department employees and their families had been inoculated at Veterans Memorial Medical Center in Quezon City.

“We were targeting 1,000 people a day,” said the hospital director, Dr. Dominador Chiong.

Lorenzana said he wanted to be inoculated, but Chiong discouraged him because he was over 60.

The Philippine National Police received 800 doses of CoronaVac. Gen. Debold Sinas, the PNP chief, said those doses would be given to health workers on the police force.

Cabinet Secretary Karlo Nograles said vaccines from the Sinovac shipment would be sent on Thursday and Friday to Vicente Sotto Memorial Hospital in Cebu City and to Southern Philippines Medical Center in Davao City to begin the immunization drive there. (See related story in Regions, Page A5.)