Cebu, Davao to roll out vaccines this week 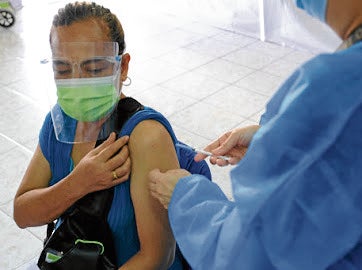 PILOT SITE A resident joins a simulation of Davao City’s vaccination drive at Mabini Elementary School in Talomo District, one of the pilot sites for the vaccine rollout. —DAVAO CITY INFORMATION OFFICE PHOTO

CEBU CITY, Cebu, Philippines — The two leading cities in the Visayas and Mindanao will roll out their respective coronavirus vaccines this week, making them among the first local governments to do so outside Metro Manila.

Cebu City will begin vaccination on Thursday, using its share of the CoronaVac vaccines produced by Sinovac Biotech and donated by the Chinese government, with medical front-line workers of the government-run Vicente Sotto Memorial Medical Center (VSMMC) as the first recipients, said Dr. Mary Jean Loreche, spokesperson of the Department of Health (DOH) in Central Visayas.

The rollout in Davao City will start on Friday involving some 4,000 health-care workers of Southern Philippines Medical Center (SPMC), the biggest government-run medical facility in Mindanao.

Baguio City, meanwhile, was still waiting for an advisory from the national government if it was included in the first rollout.

But the city has been conducting simulation activities since mid-February for its vaccination program.

Loreche said Cebu City would receive 6,000 doses but not all of VSMMC’s 2,900 health-care workers were willing to get the Sinovac shot.

Dr. Junjie Suazola, DOH Central Visayas epidemiology and surveillance unit chief, said some health workers were reluctant because of the vaccine brand while others were particular about the brand but had “their own personal reasons and their personal belief system” for refusing inoculation.

Mel Feliciano, Inter-Agency Task Force for the Management of Emerging Infectious Diseases chief implementer for the Visayas, said a Visayas Vaccine Operations Center (VVOC) has been set up in Cebu City to cover the vaccine rollout in the three Visayan regions.

Feliciano said Cebu City was the pilot area for the public rollout of the vaccine, with its processes and programs to then be replicated in other areas in Central, Western and Eastern Visayas.

For Central Visayas (Cebu, Bohol, Negros Oriental and Siquijor), Loreche said 5,634,789 people were eligible to receive the vaccine. The VVOC is still collating data for the two other regions.

Health officials would not say who would receive the first shot in Cebu.

Audan said he volunteered to be the first to boost the morale of health-care workers who were still in doubt and to increase the public’s confidence in the vaccine.

Of the 5,900 SPMC health-care workers, only 4,000, or 67 percent, were willing to be vaccinated, he said, attributing the high level of doubt and public distrust on the vaccine to the controversies surrounding the use of the Dengvaxia dengue vaccine.

He said he volunteered because he believed in CoronaVac’s safety and efficacy, pointing out that countries like Turkey and Indonesia had successfully implemented their inoculation programs using the Chinese vaccine.

“Even with my comorbidity, I’ve volunteered to be vaccinated with [CoronaVac]. I have my high blood pressure but I volunteered [so that I could] serve as a role model to the rest of the health-care workers and to convince the rest of the SPMC [to take the vaccine] because right now, we are not even 75 percent [of those willing to be inoculated],” said Audan, who was in his 50s.

In Cagayan de Oro City, a top official of the DOH-managed Northern Mindanao Medical Center (NMMC) admitted that some of their health-care personnel were still unwilling to be vaccinated.

“They want more data on the side effects [of the vaccine], the effectiveness of the vaccine,” said Dr. Bernard Julius Rocha, NMMC liaison officer.

The cities of Iloilo and Ormoc are expected to receive their own doses of the vaccine in the coming months after putting their respective 20 percent down payment to British drugmaker AstraZeneca.

The city government has allotted P200 million for the purchase of vaccines and aims to inoculate around 300,000 residents and 100,000 nonresidents working in the city.

Ormoc City procured 270,000 doses to inoculate over 135,000 people, according to Councilor Lalaine Marcos.

The city, which has earmarked P350 million for its vaccination program, has made the initial deposit to AstraZeneca on Feb. 21, becoming the first local government in Eastern Visayas to do so, Marcos said by phone on Monday.

They expect the delivery of the vaccines by July, she added.

In Cavite province, Gov. Jonvic Remulla announced on Monday that P750 million had been set aside to procure vaccines to inoculate residents age 18 to 59 years old.

He said negotiations were under way with AstraZeneca, their vaccine of choice, as it had “proven 100-percent effective to prevent any grave effect of the COVID-19 virus.”

Remulla said the province was also negotiating with Pfizer and Moderna for the procurement of vaccines for residents age 60 and above.