Duterte wants Robredo present when he gets COVID-19 shot 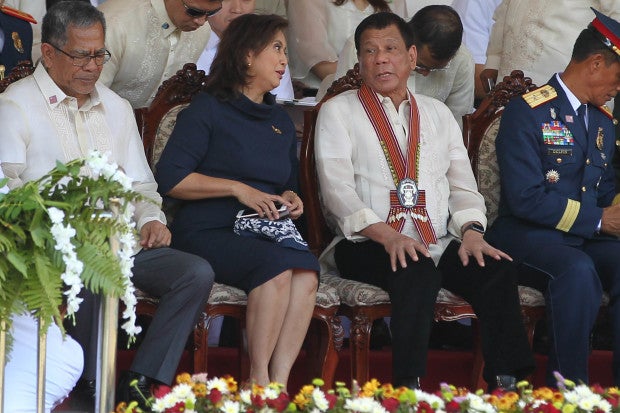 MANILA, Philippines — President Rodrigo Duterte wants Vice President Leni Robredo to be present when he gets vaccinated for COVID-19 in Malacañang.

In his pre-recorded weekly nation address, Duterte again unleashed a series of tirades against Robredo for urging him to be among the first to get vaccinated.

He accused Robredo of “baiting” him since she suspected him to have already gotten a Covid-19 shot along with military personnel last year.

“Now, when I get vaccinated here in Malacañang, I want you there. I will tell them that, since I’m old, I will only get half the dose and the other half for you to add protection to your good health,” Duterte said in Filipino.

He reiterated that he could not yet receive the available vaccine, CoronaVac, which is manufactured by Chinese drugmaker Sinovac BioTech , since it was not recommended for someone his age.

The Sinovac vaccine should only be administered to clinically healthy individuals aged 18 to 59 years old. Duterte will turn 77 next month.

The President earlier said he was waiting for the clearance of his doctor on which vaccine brand to get, daring Robredo to get vaccinated first since she was more qualified to receive the Sinovac shot.

He also accused Robredo of wanting to be “relevant” after she joined calls for further assessment for the Sinovac vaccine.

“Sometimes you take an idiotic stance. They deserve the best,” Duterte said, referring to the accusation that the government was insisting on giving the CoronaVac despite its lower efficacy compared to other COVID-19 vaccines.

“I would give them the worst? I won’t leave the frontliners behind,” he said, speaking partly in Filipino.