MANILA, Philippines — The Senate national defense committee on Monday reported out in plenary the committee report on its investigation into alleged Red-tagging activities by the military.

In sponsoring the report during the plenary session, committee chair Senator Panfilo Lacson said his panel’s Red-tagging probe “has been one of the most complex” Senate inquiries that he has presided over.

“It involved parties from the opposite poles that defy the law of magnetism in that not only would never attract each other but in fact ready to cut each other’s throat,” he said.

He also noted the “profuse bashing and criticisms from both political spheres—trolls included” that he and the committee endured during and after the conduct of the probe’s marathon hearings.

This attack, he said, “may probably be a testament that we did our best to objectively hear both sides, to ensure that we extract the best available information for the Senate and the public to digest and come up with well-informed decisions.”

In its 66-page report, the Senate panel said there is no need to criminalize Red-tagging as legal remedies against it are “sufficient” under existing laws, which aggrieved persons can make use of.

“The committee exhaustively considers the possible damage brought about by the massive information campaign of the security sector. We sought to determine if the individuals and organizations subjected to the wrongful claims of being associated with the CPP-NPA have, in fact, no legal recourse,” Lacson went on.

“Considering the claims of the Makabayan bloc on the acts of the government officials that constitute the alleged Red-tagging, the committee determines that sufficient legal remedies are already in place for the supposed aggrieved parties,” he added. 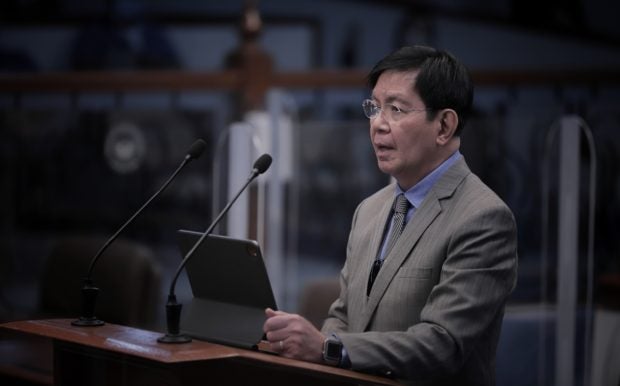 The committee’s investigation conducted late last year was triggered by a Facebook post from Lt. Gen. Antonio Parlade, chief of Southern Luzon Command and executive director of the controversial National Task Force to End Local Communist Armed Conflict (NTF-ELCAC), implying that actress Liza Soberano had been recruited by communist rebels when she communicated with Gabriela Women’s party-list group, which the military had tagged as a communist front organization.

The committee found that the “undue public propaganda” caused by Parlade’s controversial pronouncements is “damaging” to the integrity of the Duterte administration’s anti-insurgency task force as well as the Armed Forces of the Philippines (AFP).

The panel also advised the government’s security forces to “refrain from publicly vilifying, labeling and imputing guilt by association to the communist group various institutions and progressive organizations based on false or unverified information.”

Aside from this, the Senate panel report also urged the Makabayan bloc to “openly and strongly denounce” the Communist Party of the Philippines-New People’s Army-National Democratic Front (CPP-NPA-NDF) “for its actual acts of aggression against the duly constituted government and against the people to disassociate themselves from the armed struggle.”

Reacting to the report, which was released on the Senate website last week, the Makabayan bloc said current legal remedies against Red-tagging are “insufficient, defective and lacking.”

The bloc also reiterated that its members “do not espouse nor are engaged in the armed struggle.”

“We certainly condemn and do not tolerate any atrocity committed by any side of the armed conflict, especially those in violation of the Comprehensive Agreement for the Respect of Human Rights and International Humanitarian Law,” the group had said.

Meanwhile, Lacson said his committee “takes exception to the progressive groups’ allegation that Red-tagging is among the consequences of the passage of the Anti-Terrorism Act.”

“This is unconvincing, to say the least, as Red-tagging or Red-baiting is in no way related to the recently passed law. Section 4 of the law is clear and explicit that it does not penalize advocacy, the exercise of the right to organize, and other forms of legitimate dissent,” he said during the plenary session.

“Notwithstanding, we submit that the issue on the constitutionality of the Anti-Terrorism Act of 2020 is already being deliberated and discussed before the Supreme Court and therefore should not be tackled in any other venue under the prevailing sub judice rule,” he added.

The sub judice rule forbids public discussions and disclosures relating to judicial proceedings to avoid prejudging the issue, affecting the court, or hindering the administration of justice.