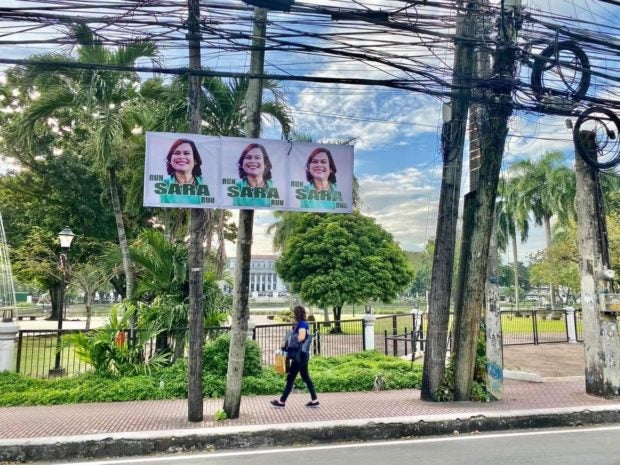 BACOLOD CITY—Posters bearing the image of Davao City Mayor Sara Duterte with the words “Run Sara Run” have surfaced in the city in what appeared to be a campaign defying President Rodrigo Duterte’s statement that his daughter won’t jump in the 2022 presidential race.

Mayor Rogelio Raymund Tongson, of HImamaylan City, said he personally supported the campaign to push Sara into the race, urging the Davao City mayor to run for president.

Tongson said he supported the call for Sara to run for president to continue what her father had started.

The elder Duterte, Tongson said, had given many projects to HImamaylan which had a big impact on his constituents.

Tongson said the Run Sara Run posters, made of tarpaulin, are being installed by people who believed in the younger Duterte’s ability to lead the country.

The President on Sunday (Feb. 28) said his daughter has no plans of running to become his successor in 2022 because she wanted to focus on raising her three children with husband, lawyer Mans Carpio.

“Sara doesn’t want to run because she has three kids who are still young. She wants to focus on her family. She told me that there’s still much time,” President Duterte said.

The Run Sara Run posters came out after a group, led by a former governor who supported the presidential run of Mar Roxas, launched the “Negros for Leni” campaign to push Vice President Leni Robredo into the 2022 presidential race.

Read Next
Pagasa sees maximum of one storm per month from March to May
EDITORS' PICK
Pru Life UK receives four golden arrows for solid corporate governance
Speed up your game with the new vivo Y20s [G]
PH’s COVID-19 active cases reach over 190k after 12k new infections reported
Harry Roque in hospital for COVID-19 treatment
Pre-order the new vivo Y20s [G] to get a free TWS earphone
WHO says not to use ivermectin on COVID-19 patients
MOST READ
Stop ‘creeping occupation’ of ‘militia’ boats in WPS, Pacquiao asks China
Bea Alonzo clarifies status of her relationship with Dominic Roque
Convicted former aide of Sen. Bong Revilla dies — BuCor
Locsin to China: ‘Then move out’
Don't miss out on the latest news and information.