Lorenzana: Reports about soldiers refusing vaccines nothing but ‘rumor’ 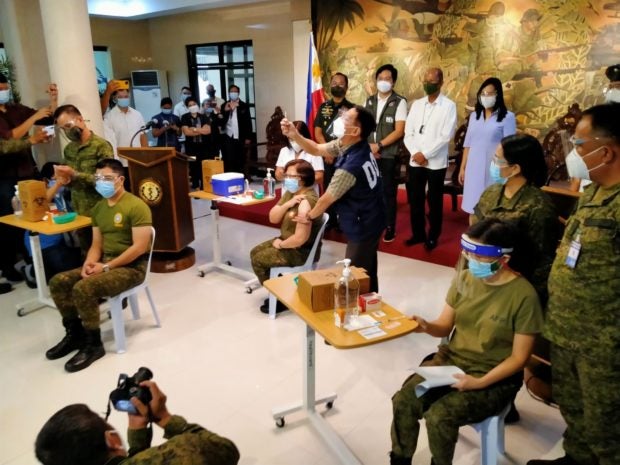 The DND and the AFP started injecting some of its personnel, who are on the frontlines, on Monday (March 1, 2021) at two military hospitals—Veterans Memorial Center and V. Luna Medical Center. DND

MANILA, Philippines—Defense Secretary Delfin Lorenzana on Monday (March 1) dismissed as rumors reports that some soldiers were opposed to being compelled to get vaccinated for SARS Cov2, the virus that causes COVID-19.

“Who said that?” Lorenzana told reporters on the sidelines of the first vaccinations of health workers at the military hospital V. Luna Medical Center.

He said soldiers were trained to follow orders. “If you tell them get vaccinated, they’ll get vaccinated. It’s not true that many are complaining,” Lorenzana said.

The Department of National Defense (DND) received 100,000 out of 600,000 doses of CoronaVac, the vaccine developed by Chinese company Sinovac. The Armed Forces of the Philippines (AFP) last week said it was requiring everyone in its payroll, especially its medical professionals, to get vaccinated or face sanctions.

Workers on the frontline may have no choice but get injected with CoronaVac because of the unavailability of other brands yet in the country. The AFP, however, said its personnel could choose any vaccine brand but these won’t be free.

“If they don’t want the ones that are free, they can buy later on,” Lorenzana said. “But it is mandatory that everybody should have,” he said.

In December, however, the Food and Drug Administration said that getting inoculated against SARS Cov2 was not compulsory.

The DND and the AFP started injecting some of its personnel, who are on the frontlines, on Monday at two military hospitals—Veterans Memorial Center and V. Luna Medical Center.

Lorenzana, 72, said he would have wanted to volunteer to get inoculated with CoronaVac first to boost confidence among DND personnel, but age restrictions for the vaccine did not allow him to do so.

“I don’t understand our detractors. When the vaccines have not arrived yet, they keep criticizing us,” Lorenzana said. “When the vaccines arrived, they still criticize because Sinovac is no good,” he added.

“But 13 countries are already using Sinovac and have no complaints,” Lorenzana said.

Read Next
2,037 more contract COVID-19 hiking tally of active infections to 31,708
EDITORS' PICK
Smart three-peats as country’s fastest mobile network – Ookla
Would the military allow me to stay this long if I’m inutile? – Duterte
In good spirits: SMDC helps farmers and residents through Kadiwa Market
Pre-order the new vivo Y20s [G] to get a free TWS earphone
65% of Filipinos say Duterte’s health should be made public – SWS
DSWD chief admits ‘slow start’ in distribution of aid in ‘NCR Plus’
MOST READ
Vico Sotto frets getting photos of ‘butt vaccination’ from Pasig dwellers
Metro Manila to have shortened curfew hours from 8 p.m. to 5 a.m. under MECQ
San Miguel Corp. continues to invest heavily in the Philippines’ future
COVID-hit Roque slams ‘un-Christian’ query on how fast he secured hospital bed
Don't miss out on the latest news and information.