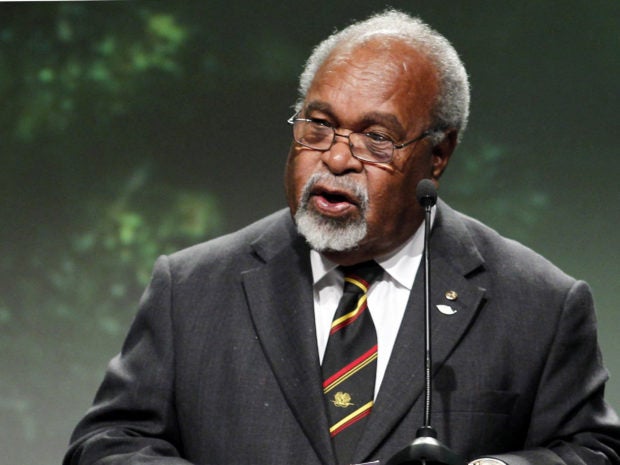 In this file photo taken on May 27, 2010 Papua New Guinean Prime Minister Michael Somare addresses the Climate and Forest Conference in Oslo. Papua New Guinea’s first prime minister and “father of the nation” Sir Michael Somare died on February 26, 2021, aged 84, after what his family described as a brief battle with cancer. Photo by Hakon Mosvold Larsen / SCANPIX NORWAY / AFP

Police Minister William Onglo warned officers would “step in to fully restore order” after disturbances in Port Moresby and the second city of Lae.

Several stores were reportedly ransacked during a national day of mourning for the country’s first prime minister and “father of the nation” Sir Michael Somare, who died of pancreatic cancer on Friday.

“Rioting is never our Melanesian way to show respect,” Onglo said in a statement.

“My darling Dadda we are not ready for a Papua New Guinea without you in it,” she said.

Known across the country simply as “The Chief”, Somare led Papua New Guinea at independence from Australia in 1975 and was prime minister for a total of 17 years, during three separate terms.

A national holiday had been declared to commemorate his passing, forcing businesses to close.

In one instance in Lae, an Asian-owned store appeared to have been specifically targeted.

Local media showed footage of dozens of people, including children, running from the store carrying snacks and bottles of fizzy drinks.

Police Commissioner David Manning on Friday had warned against unrest, saying officers “throughout the country will be out in full force to ensure that opportunists do not take this sad day in our history to create fear and panic.”

Papua New Guinea is one of the poorest nations in the Pacific. Violent crime and social unrest are commonplace.