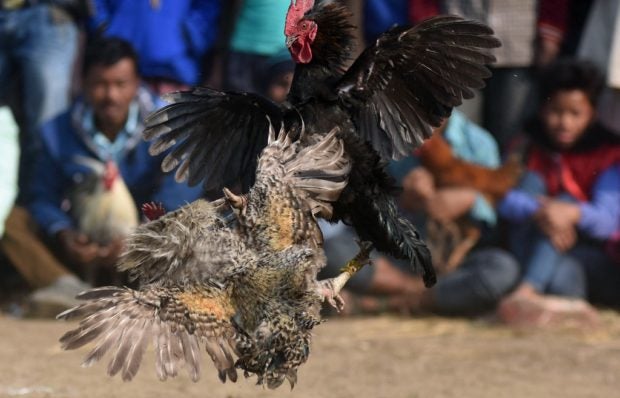 In this file photo taken on January 20, 2017, a traditional cock fight takes place at the Jonbeel Mela festival in the Morigaon district of Assam, some 60 km from Guwahati. A rooster fitted with a knife for an illegal cockfight in southern India has killed its owner and police said on February 27 they have launched a manhunt. Photo by Biju BORO / AFP

NEW DELHI — A rooster fitted with a knife for an illegal cockfight in southern India has killed its owner, sparking a manhunt for the organizers of the event, police said Saturday.

The bird had a knife attached to its leg ready to take on an opponent when it inflicted serious injuries to the man’s groin as it tried to escape, officers said.

The victim died from loss of blood before he could reach a hospital in the Karimnagar district of Telangana state earlier this week, local police officer B. Jeevan told AFP.

The man was among 16 people organizing the cockfight in the village of Lothunur when the freak accident took place, Jeevan said.

The rooster was briefly held at the local police station before it was sent to a poultry farm.

“We are searching for the other 15 people involved in organizing the illegal fight,” Jeevan said.

They could face charges of manslaughter, illegal betting and hosting a cockfight.

Cockfights are banned but still common in rural areas of Telangana, Andhra Pradesh, Karnataka and Odisha states — particularly around the Hindu festival of Sankranti.

Specially-bred roosters have 7.5-centimeter (three-inch) knives or blades tethered to their legs and punters bet on who will win the gruesome fight.

Thousands of roosters die each year in the battles which, despite the efforts of animal rights groups, attract large crowds.

Read Next
S. Africa to ease coronavirus restrictions after ‘dramatic decline’
EDITORS' PICK
Most anti-Asian attacks committed by whites – new study
Smart celebrates all kinds of ‘#SimplyLove’ for Pride Month
SWS: Over 12M Filipinos still jobless as of May 2021
SANTIS Delicatessen: The road to survival is sweet and savory
Smart brings KCON:TACT especially 4U to subscribers from June 19 to 27
Another Filipino falls victim to hate attack in California
MOST READ
Gordon eyes VP running mate for 2022 polls
Gilas Pilipinas routs Indonesia anew, stays unbeaten in Fiba Asia Cup qualifiers
William Martinez sometimes feels his kids ‘don’t remember’ him anymore
SWS: Over 12M Filipinos still jobless as of May 2021
Don't miss out on the latest news and information.