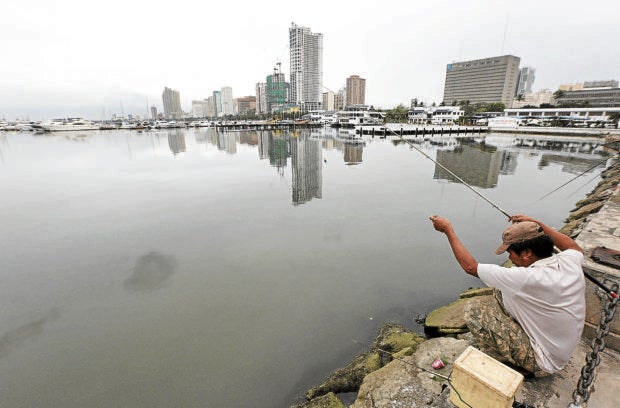 BAY VIEW A man lowers his bait into the waters of Manila Bay off the Cultural Center of the Philippines Complex in Pasay City in this Jan. 28, 2018, file photo. —GRIG C.MONTEGRANDE

Manila Goldcoast is part of the Tieng family-led Solar Group of Companies, which is into entertainment, satellite communications, aviation, merchandising and property development.

The Manila Solar City pro­ject involves the reclamation of 148 ha beside the Cultural Center of the Philippines (CCP) Complex, and behind the Manila Yacht Club and Philippine Navy headquarters.

As early as March 1991, the then Public Estates Authority — now the PRA — gave Manila Goldcoast’s parent company, Elco Development & Construction Corp., the go-ahead to pursue the Manila Bay project as part of the Manila-Cavite Coastal Road Reclamation (MCCRR)-North Sector Reclamation Project, which is envisioned as a commercial, business, residential and tourism hub.

In building this planned city, Manila Goldcoast said an estimated 20 million cubic meters of sand would be used to reclaim the area.

With the use of materials that are readily available in the sea, the company said it expected water levels to lower as construction commenced.

The reclaimed area will have a frontage of 635 meters parallel to Roxas Boulevard, and will occupy less than 0.082 percent of the bay’s 1,800-square-kilometer surface area. Its boundary will be up to the Ospital ng Maynila, a full kilometer from the US Embassy.

Like the CCP Complex, which includes the Philippine International Convention Center, Folk Arts Theater, Manila Film Center, Coconut Palace, and Sofitel Hotel, the reclamation will not adversely affect the historic allure of the bay, the project’s proponents said.

Several environmen­tal groups, however, had opposed the project, which the Manila City Council had blocked by passing Ordinance No. 7777, banning reclamation on Manila Bay.

But the 1993 ordinance, issued two years after the project’s approval, would be reversed in 2011 by City Ordinance No. 8233, lifting the ban on reclamation. The city government of Manila subsequently entered into a consortium agreement with Manila Goldcoast.

An attendant controversy of the planned reclamation in Manila Bay is the Pasay City government’s assertion that the proposed projects partly cover Pasay.

In November 2018, the city governments of Manila and Pasay signed an agreement to extend assistance to business groups involved in the proposed reclamation projects.

In February last year, President Rodrigo Duterte himself said he was against reclamation on Manila Bay, as this would lead to “Manila’s collapse,” he said.

“So you should study it carefully. The next administration, whoever gets to be president of this country—study carefully. Because that Manila there, that is an old city and it will decay if you add so many things in front of Manila Bay,” Mr. Duterte said at the inauguration of the Sangley Airport project in Cavite City on Feb. 15, 2020.