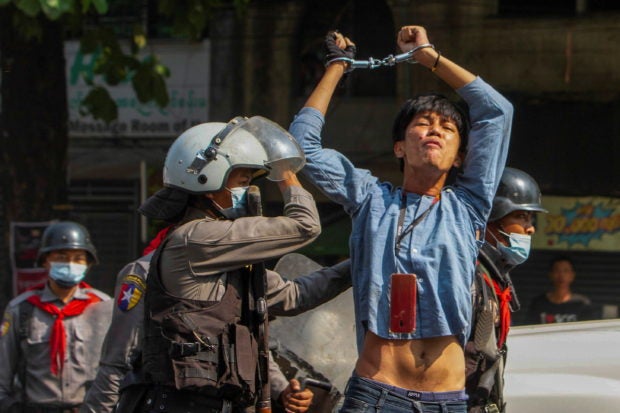 A pro-democracy protester is detained by riot police officers during a rally against the military coup in Yangon, Myanmar, February 27, 2021. REUTERS/Stringer

Police in Myanmar launched their most sweeping crackdown in three weeks of nationwide protests against military rule on Saturday, arresting hundreds of people and shooting and wounding at least one person.

State television announced that Myanmar’s U.N. envoy had been fired for betraying the country, a day after he urged the United Nations to use “any means necessary” to reverse the Feb. 1 coup that ousted elected leader Aung San Suu Kyi.

Myanmar has been in turmoil since the army seized power and detained Suu Kyi and much of her party leadership, alleging fraud in a November election her party won in a landslide.

The coup, which stalled Myanmar’s progress toward democracy, has brought hundreds of thousands of protesters onto the streets and drawn condemnation from Western countries, with some imposing limited sanctions.

Police were out in force early on Saturday, taking up positions at usual protest sites in the main city of Yangon.

Confrontations developed as people came out despite the police operation, chanting and singing. They scattered into side streets and buildings as police advanced, firing tear gas, setting off stun grenades and shooting guns into the air. Police set upon some people with clubs, witnesses said.

State-run MRTV television said more than 470 people had been arrested across the country. It said police had given warnings before dispersing people with stun grenades.

“People blocked the roads without reason. Among those arrested, we will scrutinize those who organize the protests and take tough action,” it said.

The Assistance Association for Political Prisoners rights group said it believed the number of arrests was higher, with at least 10 prison buses carrying 40 to 50 people each taken to the Insein Prison in Yangon.

Several journalists were among those detained, their media organisations and colleagues said.

“We’re fighting to end to this military bullying which has been going on for generation after generation.”

Police confronted protesters across the country. Among those detained in the second city of Mandalay was Win Mya Mya, one of two Muslim members of parliament for Suu Kyi’s National League for Democracy (NLD), media said.

One woman was shot and wounded in the central town of Monwya, local media 7Day News and an emergency worker said. 7Day and two other media organisations had earlier reported that she was dead.

Junta leader General Min Aung Hlaing has said authorities have been using minimal force. Nevertheless, at least three protesters have died over the days of turmoil. The army says a policeman has been killed in the unrest.

Activists called for another day of protests on Sunday.

Saturday’s violence came a day after Myanmar’s Ambassador Kyaw Moe Tun told the U.N. General Assembly he was speaking on behalf of Suu Kyi’s government and appealed for help to end the military coup.

MRTV television said he had been fired in accordance with civil service rules because he had “betrayed the country” and “abused the power and responsibilities of an ambassador”.

However, the United Nations has not officially recognised the junta as Myanmar’s new government.

U.N. Special Rapporteur Tom Andrews said he was overwhelmed by the ambassador’s “act of courage”, adding on Twitter “It’s time for the world to answer that courageous call with action”.

China’s envoy did not criticise the coup and said the situation was an internal Myanmar affair, adding that China supported a diplomatic effort by Southeast Asian countries to find a solution.

The Myanmar generals have traditionally shrugged off diplomatic pressure. Australia’s Woodside Petroleum Ltd said it was cutting its presence in Myanmar over concern about rights violations and violence.