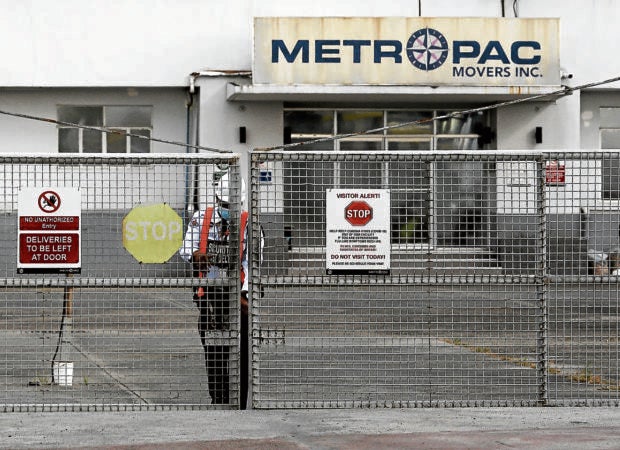 FIRST STOP Some of the Sinovac vaccine doses donated by China and expected to arrive in the country today are to be initially stored in this office in Barangay Concepcion I, Marikina City. —RICHARD A. REYES

MANILA, Philippines — An association of doctors at the Philippine General Hospital (PGH) insisted on Saturday that a China-made vaccine must first undergo an appraisal before it is administered to health-care workers at the state-owned hospital, noting that it met sweeping disapproval from its residents and fellows.

In a statement, the PGH Physicians’ Association said “it came as a surprise” to the hospital community that the vaccine that would be administered to its staff was the one developed by the Chinese company Sinovac Biotech, which the Food and Drug Administration (FDA) did not recommend for health-care workers exposed to COVID-19.

The FDA noted that Sinovac’s vaccine, CoronaVac, had only a 50.4-percent efficacy rate for health workers dealing with the coronavirus in tests in Brazil.

The physicians said the vaccine must be evaluated by the Health Technology Assessment Council (HTAC), which they expected to “formulate recommendations with judicious haste.”

“As the national university hospital, PGH should set an example on how vaccination rollout should be executed in the country,” the group said in a statement. “PGH should uphold the ideals of ethical and evidence-based medicine, [of] which it has been a bastion.”

The doctors’ group issued the statement on the eve of the scheduled arrival of 600,000 doses of the Sinovac vaccine donated by the Chinese government.

It would be the first COVID-19 vaccine to legally enter the Philippines. A vaccine produced by the Chinese state-owned China National Pharmaceutical Group Co. Ltd., popularly known as Sinopharm, was smuggled into the country as early as September last year.

The physicians called on the PGH community to demand a “safe and efficacious COVID-19 vaccine for all.”

“We recognize the efforts of the PGH administration in hastening the vaccination process for its constituents. However, the vaccination plan should have been handled with more prudence and transparency,” the group added.

On Feb. 25, PGH administrators announced that it would “take whatever vaccine becomes available.”

The doctors noted that 94 percent of health-care workers and employees who had preregistered for the hospital’s vaccine program “expressed willingness to be immunized, under the impression that the vaccine to be administered has undergone the proper evaluation process by the FDA, HTAC and Nitag (National Immunization Technical Advisory Group).”

Nitag on Friday recommended the vaccine for health workers without specifying that they were for pandemic front-liners.

PGH, a COVID-19 dedicated hospital, is set to be the first recipient of the country’s first batch of CoronaVac to be delivered to the country.

President Duterte will lead top government and military officials who will welcome the donated vaccine on Sunday.

Only two physicians—Health Secretary Francisco Duque III and Dr. Jaime Cruz, special envoy to China for trade and market access—will be in his large entourage of VIPs.

They will be accompanied by, among others, Chinese Ambassador Huang Xilian and several Cabinet members, including Executive Secretary Salvador Medialdea, Foreign Secretary Teodoro Locsin Jr., Defense Secretary Delfin Lorenzana and Secretary Carlito Galvez Jr., who is in charge of the national vaccination program.

Philippine National Police chief Gen. Debold Sinas and military Chief of Staff Gen. Cirilito Sobejana and his service commanders will be in the entourage.

“We are excited over the vaccine’s arrival,” presidential spokesperson Harry Roque said at a press briefing on Saturday.

The Sinovac shots will kick off the government’s COVID-19 mass vaccination program, with health-care workers in Metro Manila, Cebu and Davao to be prioritized for the jabs. The military will receive 100,000 doses of the two-shot vaccine.

“This is a safe vaccine and this will be beneficial to healthcare workers,” Roque said.

But he said health-care workers would not be forced to get Sinovac and would remain on the priority list of those to be inoculated once their preferred brand becomes available.

“They won’t lose their priority standing. But this is only for health-care workers,” he said.

A day after the Sinovac vaccine arrives, the Philippines will receive 525,600 doses of AstraZeneca vaccines.

Roque said the shipment was part of the “first round of allocated doses from the Covax facility,” the international vaccine pool managed by the World Health Organization, the Global Alliance for Vaccines and Immunization, the Coalition for Epidemic Preparedness Innovations and the United Nations Children’s Fund.

The country was to receive 44 million doses of assorted vaccines from Covax to inoculate 20 percent of the country’s population, he said.

The AstraZeneca vaccine that will arrive on Monday will be part of the 5.2 million to 9.2 million AstraZeneca shots that the Philippines expects to get from the Covax facility.

In a video message sent to Palace reporters, Roque thanked British Ambassador Daniel Pruce for expediting the shipment of the vaccine.

Aside from the AstraZeneca shots, the Philippines expects to get 117,000 doses of the vaccine produced by Pfizer-BioNTech also from the Covax facility.

At the House of Representatives, Speaker Lord Allan Velasco thanked the President for immediately signing the COVID-19 Vaccination Program Act on Friday, just days after Congress passed the measure.

“With this new law, the Philippines will now be in a better position to defeat the virus and protect the health of its 110 million people,” Velasco said in a statement.

The law will fast-track the procurement and administration of vaccines and create a P500-million indemnification fund for those who may suffer severe adverse reaction after they are inoculated.