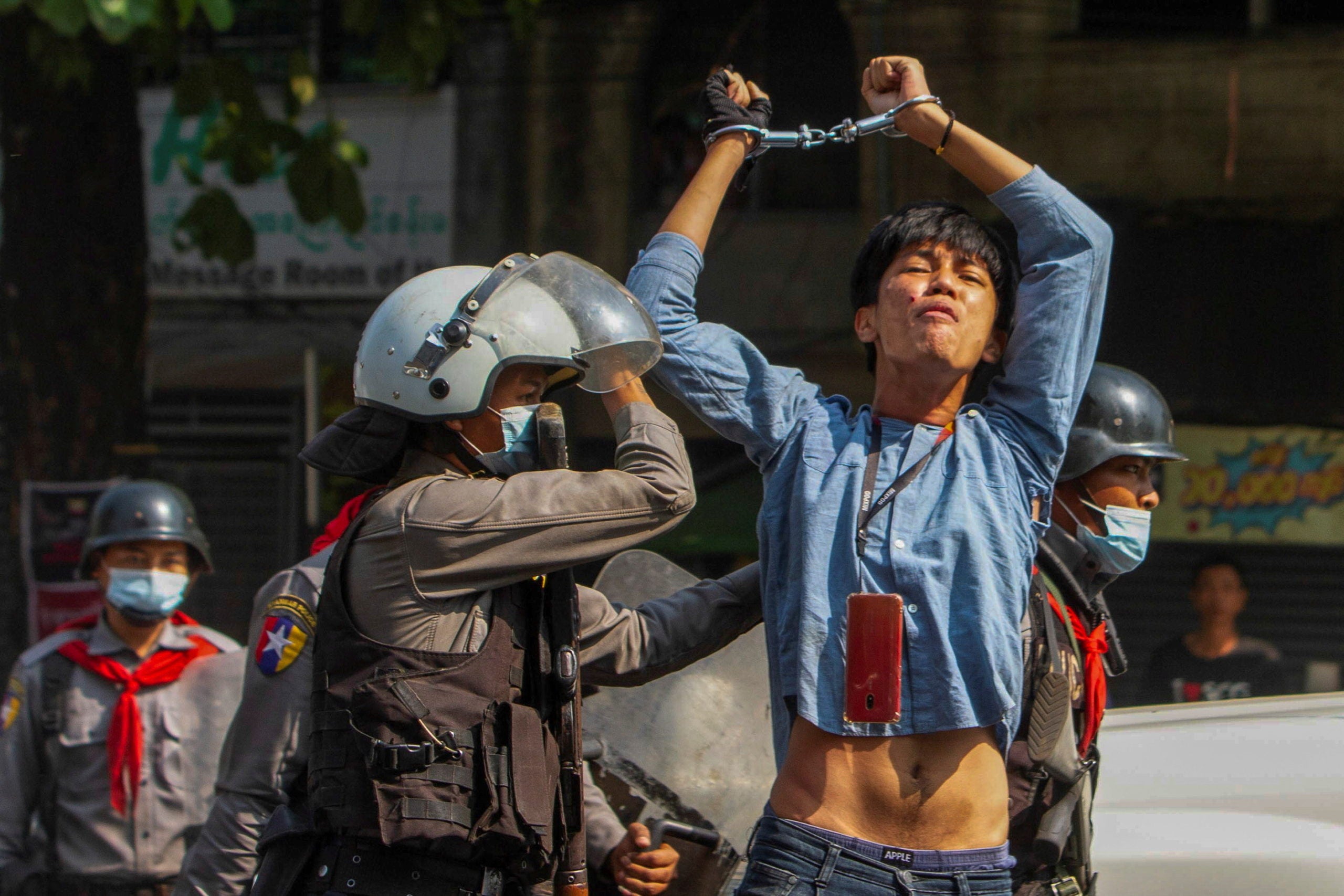 A pro-democracy protester is detained by riot police officers during a rally against the military coup in Yangon, Myanmar, February 27, 2021. REUTERS/Stringer

Myanmar police moved decisively on Saturday in a bid to prevent opponents of military rule gathering throughout the country after Myanmar’s U.N. envoy urged the United Nations to use “any means necessary” to stop a Feb. 1 coup.

The Southeast Asian country has been in turmoil since the army seized power and detained elected leader Aung San Suu Kyi and much of her party leadership, alleging fraud in a November election her party had won in a landslide.

Uncertainty has grown over Suu Kyi’s whereabouts, as the independent Myanmar Now website on Friday quoted officials of her National League for Democracy (NLD) party as saying she had been moved this week from house arrest to an undisclosed location.

The coup has brought hundreds of thousands of protesters to Myanmar’s streets and drawn condemnation from Western countries, with some imposing limited sanctions.

Police were out in force early in the main city of Yangon and elsewhere, deployed at usual protest sites and detaining people as they congregated, witnesses said. Several media workers were detained.

But people still gathered, some for a march by ethnic minorities in Yangon, their numbers building through the day.

Crowds chanted and sang, then melted into side streets as police advanced, firing tear gas, setting off stun grenades, and firing guns into the air, witnesses said.

Similar scenes played out in the second city of Mandalay, and several other towns including Dawei in the south, witnesses and media reported.

A protester in the central town of Monwya said police had fired water cannon as they surrounded a crowd.

“They’ve blocked all the ways out,” Aye Aye Tint told Reuters from the town. “They used water cannon against peaceful protesters, they shouldn’t treat people like that.”

At the U.N. General Assembly, Myanmar’s Ambassador Kyaw Moe Tun said he was speaking on behalf of Suu Kyi’s government and appealed to the body “to use any means necessary to take action against the Myanmar military and to provide safety and security for the people.” 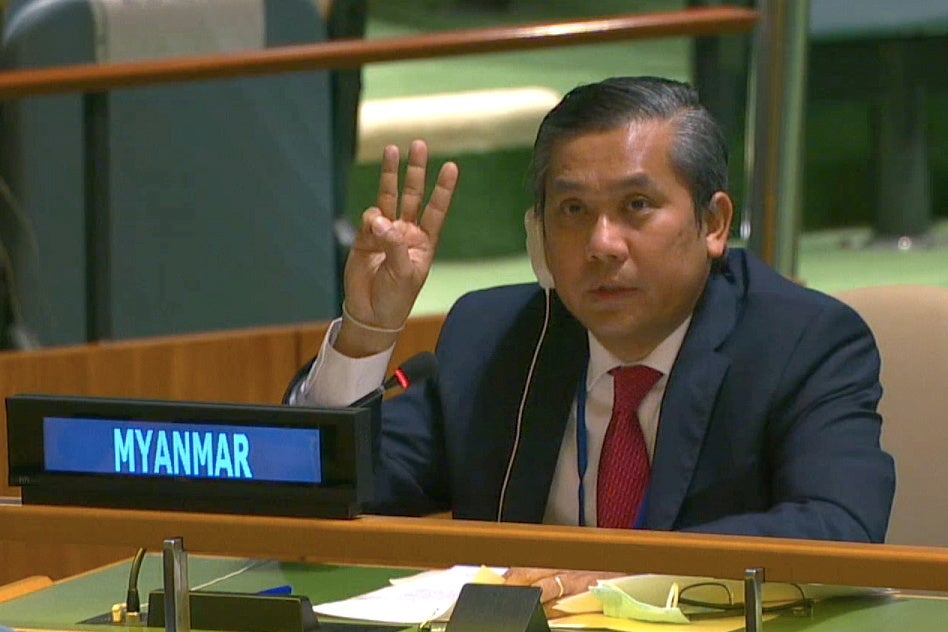 Myanmar’s ambassador to the United Nations Kyaw Moe Tun holds up three fingers at the end of his speech to the General Assembly where he pleaded for International action in overturning the military coup in his country as seen in this still image taken from a video, in the Manhattan borough of New York City, New York, U.S., February 26, 2021. United Nations TV/Handout via REUTERS

“We need further strongest possible action from the international community to immediately end the military coup, to stop oppressing the innocent people … and to restore the democracy,” he told the 193-member group, receiving applause as he finished.

Kyaw Moe Tun appeared emotional as he read the statement on behalf of a group of elected politicians that he said represented the legitimate government.

Delivering his final words in Burmese, the career diplomat raised the three-finger salute of pro-democracy protesters and announced “our cause will prevail”.

Opponents of the coup hailed Kyaw Moe Tun as a hero and flooded social media with messages of thanks.

“The people will win and the power-obsessed junta will fall,” one protest leader, Ei Thinzar Maung, wrote on Facebook.

U.N. Special Rapporteur Tom Andrews said he was overwhelmed as he watched the ambassador’s “act of courage”.

“He spoke up for the people of Myanmar and against an illegal coup. It’s time for the world to answer that courageous call with action,” Andrews said on Twitter.

China’s envoy did not criticize the coup and said the situation was Myanmar’s “internal affairs”. China supported diplomacy by Southeast Asian countries, he said.

A lawyer acting for Suu Kyi, Khin Maung Zaw, told Reuters he had also heard from NLD officials that she had been moved from her home in the capital, Naypyitaw, but could not confirm it. Authorities did not respond to a request for comment.

The lawyer said he had been given no access to Suu Kyi ahead of her next hearing on Monday, adding: “I’m concerned that there will be a loss of rights to access to justice and access to legal counsel”.

Protesters have been demanding the release of Suu Kyi, 75, and recognition of the result of last year’s election.

The army has promised an election but not given a date. It has imposed a one-year state of emergency.

The question of an election is at the center of a diplomatic effort by the Association of Southeast Asian Nations, of which Myanmar is a member.

Indonesia has taken the lead but coup opponents fear the effort could legitimize the junta and what they see as its unlawful bid to annul the November election.