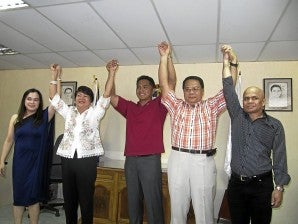 NEW REPRESENTATIVE Jun Omar Ebdane (middle, in red shirt) is proclaimed winner of the special election in the second congressional district of Zambales on Sunday, February 5, 2012. His father, Governor Hermogenes Ebdane Jr. (second from right), joins the proclamation ceremony held by members of the provincial board of canvassers. PHOTO BY ROBERT GONZAGA/INQUIRER CENTRAL LUZON

Comelec spokesman James Jimenez said Jun Omar Ebdane, the former provincial administrator and candidate of the Partido ng Manggagawa at Magsasaka, was proclaimed winner by the board of canvassers at around 11:15 a.m. on Sunday. He garnered 62,867 votes.

The runnerup was former vice governor Cherly Deloso-Montallo of the Liberal Party, who got 56,945 votes.

Jimenez said the voter turnout was around 70 percent. There are 200,813 registered voters in the second district, which covers the provincial capital Iba and the towns of Botolan, Cabanga, Candelaria, Masinloc, Palauig, San Antonio, San Felipe, San Narciso and Santa Cruz.

The Comelec official said the canvassing board took a recess around 10 p.m. on Saturday to await results from the various precincts. However, the reception committee continued receiving ballot boxes until the board resumed its session around 8 a.m. on Sunday.

The board finished its tally around 10 a.m. but it took more than an hour for the documentation to be completed before the proclamation.

The special election was conducted by manual balloting and counting.

The other candidates were Diaz’s daughter Rica Arambulo of the Nacionalista Party and independents Wilfredo Pangan and Alfred Mendoza.