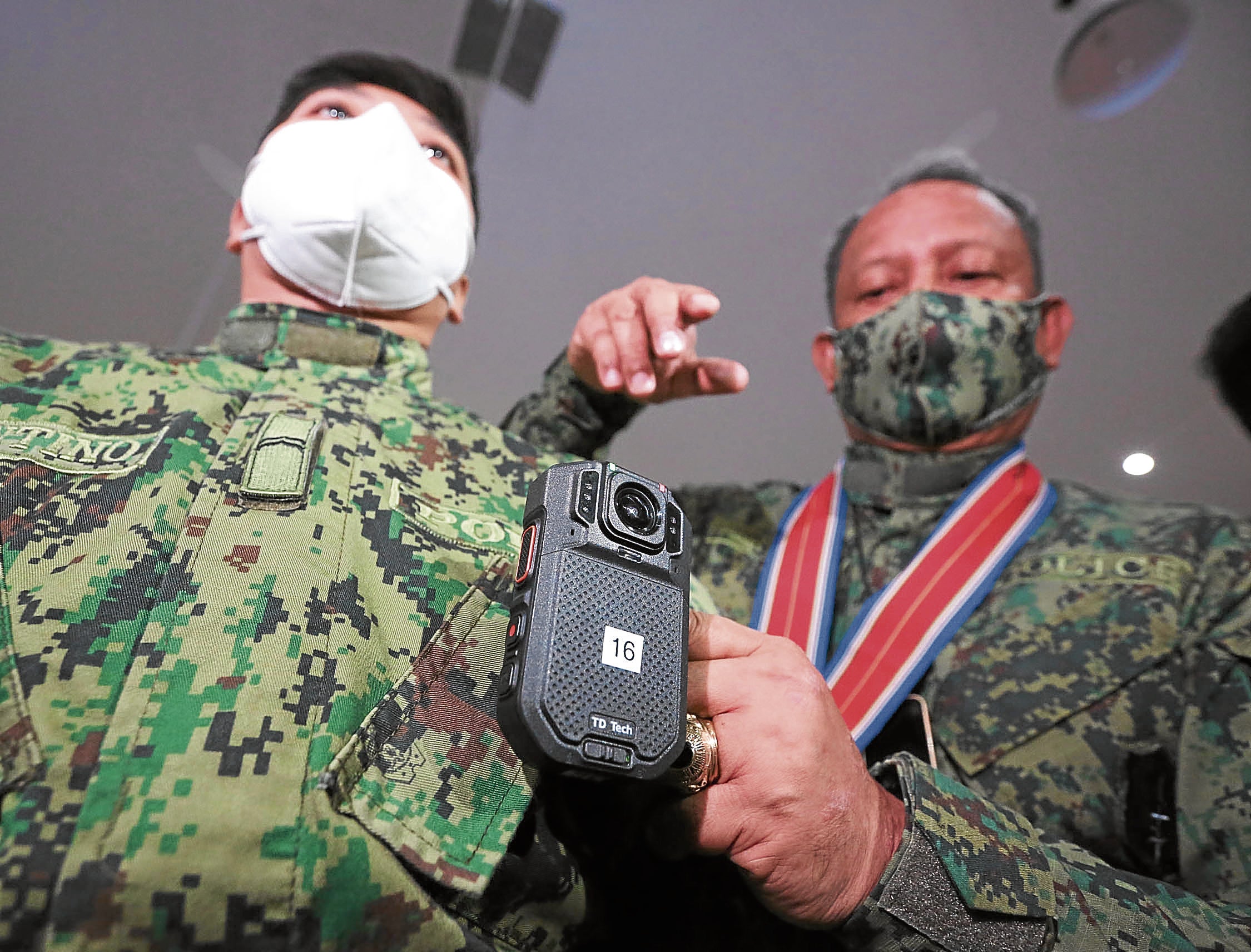 VITAL EQUIPMENT Police Maj. Gen. Angelito Casimiro, the PNP director for logistics, oversees a training session on the use of body cameras on Friday. The cameras are to be used in routine patrols and field operations. —MARIANNE BERMUDEZ

After a long delay, the Philippine National Police will finally use the P289-million body-worn cameras that it purchased in 2019 to help ensure transparency and accountability in its operations, particularly when the conduct and legality of certain raids, arrests or other anticrime activities are called into question.

The PNP made the announcement as it grapples with the controversy arising from Wednesday’s “shootout” between police officers and agents of the Philippine Drug Enforcement Agency (PDEA).

The so-called misencounter left four people dead—and many questions still unanswered as to why two law enforcement groups ended up trading fire, with both claiming to be conducting a legitimate antidrug operation. (See related story on this page)

More than a hundred officers under the National Capital Region Police Office made up the first batch to be trained on the use of the body cams at Camp Bagong Diwa in Taguig City on Friday.

The PNP has purchased a total of 2,696 cameras from EVI Distribution Inc., an electronics manufacturing company based in San Juan City. According to Police Major Gen. Angelito Casimiro, the PNP director for logistics, the body cameras and their component hardware have been distributed among police stations across the country, where they will be reconfigured on their docking stations.

The cameras are to be used for either routine patrols or field operations. Some will be equipped with SIM cards to allow livestreaming or real-time video feed to the PNP Command Center or local monitoring units.

The body cams are waterproof and can record video for up to eight hours.

A set of protocols on the use of body cams is expected to be issued by PNP directorate for operations. But for now, it is up to station commanders to decide when to use the equipment, Casimiro said.According to a January 2019 memo issued by then PNP chief and now Sen. Ronald “Bato” dela Rosa, “the use of body cameras and other gadgets to record all anti-illegal drug operations is encouraged.”

Casimiro said officers wearing body cams cannot change their configuration or turn them off until they go off duty.

He acknowledged that the cameras may have difficulty streaming live video in areas with poor network connection.

“We hope and pray that everything will [run] smoothly. This will still run through processes and by the end of March, the body-worn cameras will be fully operational in all PNP units,” Casimiro said.

The procurement of body cams had been in the pipeline since 2017, following public outrage over the killing in August that year of 17-year-old Kian de los Santos in an antidrug operation by the Caloocan City police. In November the following year, three officers were convicted of murdering the teenager, whom they had falsely tagged as a drug suspect.

The PNP then allotted P334 million for the purchase of the cameras.

Casimiro said the use of body cams would be “very crucial” in police operations as it would improve documentation and evidence gathering.

“It enhances police transparency and legitimacy, as well as civility of police and citizens during encounters. This will create a huge impact on our policing and on the criminal justice system as a whole,” he said.