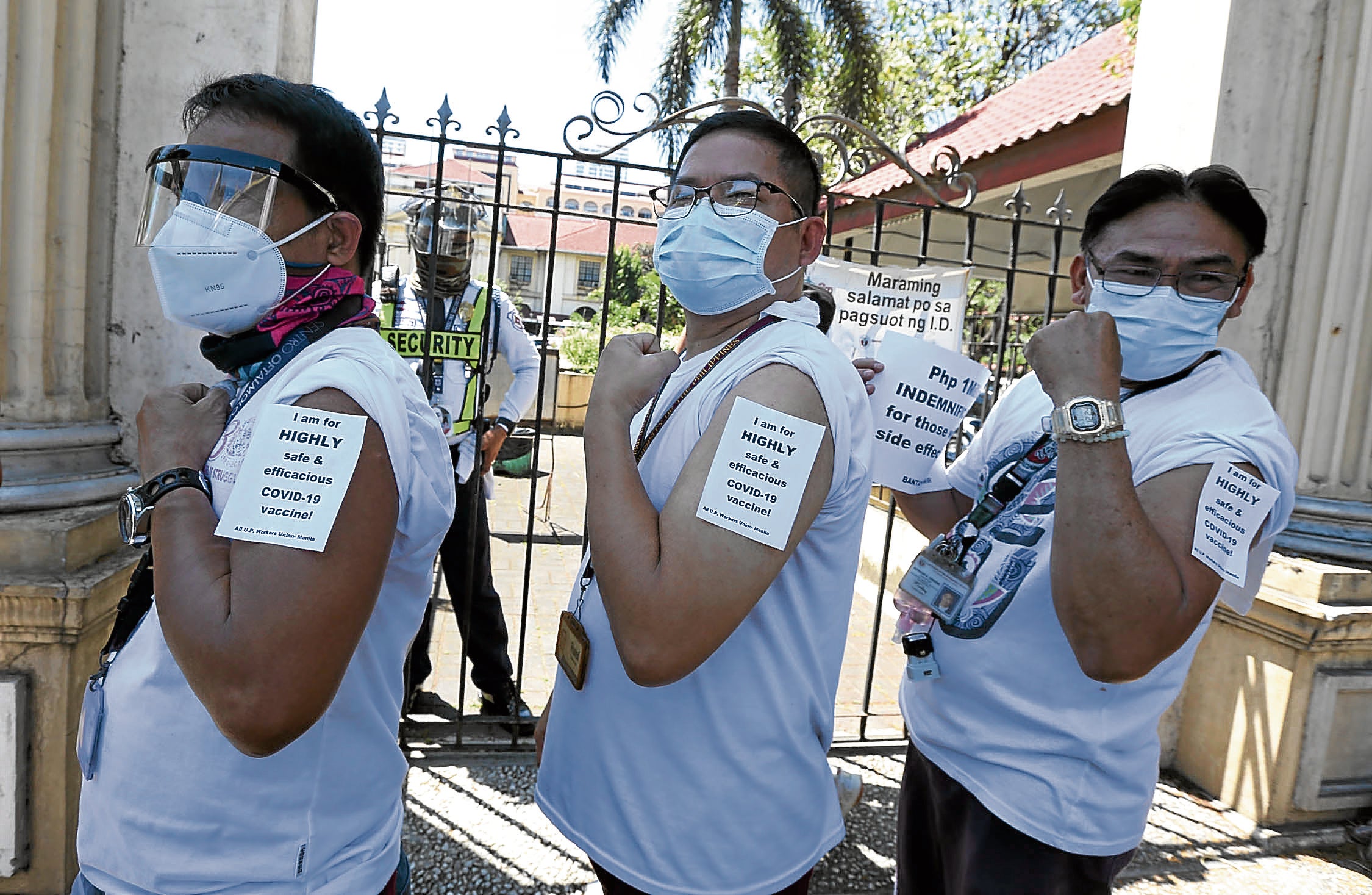 THE SAFEST THEY DESERVE Members of All UP Workers Union protesting on Friday against the use of the China-made Sinovac vaccine say Filipino health workers in the front lines of the fight against COVID-19 deserve the safest and most efficacious shots. —MARIANNE BERMUDEZ

The National Immunization Technical Advisory Group (Nitag) on Friday recommended the use of the COVID-19 vaccine developed by a Chinese company even for health workers.

The Chinese government was scheduled to deliver on Sunday its donation of 600,000 doses of CoronaVac, the vaccine produced by Sinovac Biotech after the Food and Drug Administration (FDA) gave the company an emergency use authorization (EUA).

The vaccine will be the first to be shipped legally to the country. Another vaccine developed by China’s state-run China National Pharmaceutical Group, popularly known as Sinopharm, was found to have been smuggled into the country as early as September last year.

The FDA, however, stated that it was not recommending CoronaVac for front-line health workers handling coronavirus cases because of the relatively low 50.4-percent efficacy rating of the vaccine in tests among the same group in Brazil. This has created hesitancy toward its use among Filipino health-care professionals.

But Malacañang and the Department of Health (DOH) on Friday said the vaccine was safe.

“The DOH, the [FDA] and our panel of experts concurred that current available evidence is enough to establish that the vaccine is safe for use,” said Health Undersecretary Maria Rosario Vergeire.

She said Nitag’s recommendation was approved by the Inter-Agency Task Force for the Management of Emerging Infectious Diseases (IATF), the government body in charge of the response to the pandemic.

Vergeire said that the agency was not prohibiting health-care workers from getting the Sinovac vaccine.

“We want to emphasize that the provision on use for health-care workers attending to COVID-19 patients included in the EUA granted for Sinovac is not a contraindication, nor a recommendation borne of concern over the vaccine’s safety. The DOH, the FDA, and our panel of experts concur that current available evidence is enough to establish that the vaccine is safe for use,” Vergeire said.

According to the DOH, no vaccine provides 100-percent protection from COVID-19.

“Given this evidence, the Nitag has deemed it sufficient to recommend the use of the vaccine for HCWS (health-care workers) as it bears to reiterate that our goal for prioritizing health-care workers for vaccination is to reduce morbidity and mortality among their group while they maintain the most critical essential health services,” she said.

Malacañang welcomed the experts’ recommendation to use the Sinovac vaccines on health-care workers.

“As we have said [on] many occasions, health-care workers are the most critical front-liners in our fight against COVID-19 and they remain at the top of our priority list for vaccination,” presidential spokesperson Harry Roque said in a statement on Friday.

He said the IATF’s approval of the recommendation of the Nitag and the Technical Advisory Group of the DOH was “an assurance” that the Sinovac vaccine was “safe and beneficial to our health-care workers.”

He said Malacañang was confident that many health-care workers would want to be inoculated with the Chinese vaccine.

In addition to health workers, those who are in line to receive the donated vaccine are members of the Armed Forces of the Philippines, which is expected to get 100,000 doses.

Vaccination is mandatory for the military, but individual soldiers are free to choose which vaccine they prefer, Arevalo said.

“We don’t want that those of us who will deliver the vaccines, but are unprotected, will spread the virus to the people we want to help,” he said at Friday’s Laging Handa briefing.

Soldiers who do not want to get the Sinovac shot may choose another brand of vaccine, but they would have to pay for it, Arevalo said.

Health-care workers also would not be forced to get the Sinovac shots, according to Vergeire.Anna Ong-Lim, member of the DOH technical advisory group, said she understood the hesitation toward Sinovac.

“I am also part of the PGH (Philippine General Hospital) community, and we have been waiting and hoping for the vaccines. Of course we were told that it would be the Pfizer vaccine, and I can say that when we heard that news, our spirits were really lifted,” she said.

She said it would not be a problem if health-care workers waited for their chosen vaccine.

But she said the issue was “whether [the other vaccines] will come, and if they will come.”

“Recognizing this fact, we want to give them the chance to take the Sinovac vaccine. It’s an option, since some of them really feel like every day they come to work is a gamble on their lives,” she added.

Over 40 members of the All UP Workers Union staged a protest at the PGH on Friday against the use of the Sinovac vaccine and demanded the “safest” and “highly efficacious” vaccine for health-care workers.

“We are the front-liners. We are the ones facing the patients and we will be given a vaccine that is not sure?” said national union president Jocelle Ebesate. He said almost 97 percent of PGH workers favored the Pfizer vaccine.

In a statement on Friday evening, hospital director Gap Legaspi said that he had earlier advised the PGH community “to accept any vaccine as long as it is approved by the Food and Drug (Administration) and has an emergency use authorization.”

“Let us understand that all the chosen vaccines—Pfizer, AstraZeneca and Sinovac—are all declared safe and effective. The FDA said all vaccines have the same safety factor, and that the side effects are less likely by half of half of a percentage,” he added.

He said it would be a “huge benefit” to health-care workers who are deemed to be at high risk to be vaccinated.

Legaspi said vaccination was “purely voluntary” and would begin on March 2.

“No one is being forced to take this vaccine and assurance is given that if you decide not to take this one, your prioritization as a health-care worker will remain when the next one comes,” he said. —WITH REPORTS FROM LEILA B. SALAVERRIA AND JODEE A. AGONCILLO