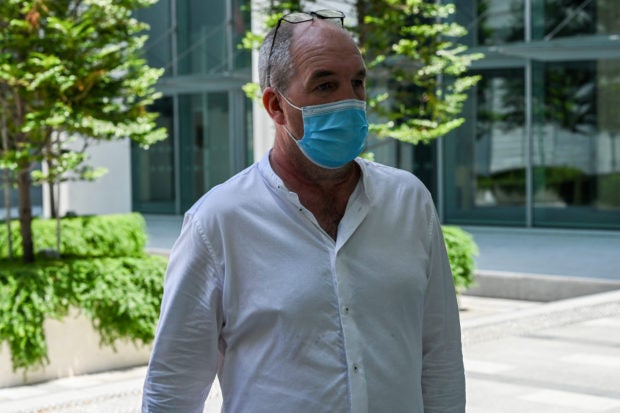 British national Nigel Skea arrives at the State Court in Singapore on February 26, 2021, for sentencing in a case of violating Covid-19 coronavirus regulations. (Photo by Roslan RAHMAN / AFP)

SINGAPORE — A British man was jailed for two weeks Friday for violating Singapore’s strict coronavirus rules by leaving his room at a luxury hotel while under quarantine to meet his fiancee.

Nigel Skea was also fined Sg$1,000 (US$750) for the breach, while Singaporean Agatha Maghesh Eyamalai — now his wife — was jailed for a week for helping him.

Passing sentence, judge Jasvender Kaur said the couple had been “overcome with emotions because they had not seen each other for a long time.”

But she said disruptions to relationships were inevitable during the pandemic, and the court must send a “clear message” such violations could not be tolerated.

Skea, 52, arrived in September from London to visit Eyamalai and was ordered to undergo a mandatory, two-week quarantine at the Ritz-Carlton Millenia hotel.

He texted Eyamalai, 39, details of where he was staying and she booked a separate room at the same hotel, 13 floors higher.

He then sneaked out of his room and walked up the emergency staircase to the 27th floor where Eyamalai, who was not under quarantine, opened the emergency exit door for him.

The pair spent the night together, but a security guard caught him the next morning as he tried to return to his own room.

He could not access his floor via the emergency staircase, so he had to walk down to the fourth floor, where he was spotted.

He was also not wearing a mask, another violation of virus rules. The couple, who were married in November, had pleaded guilty.

Their lawyer, Surinder Singh Dhillon, told reporters they would not appeal the sentences as “they want to finish this matter, and he wants to go back home as soon as possible”.

Authorities in the city-state have been uncompromising when it comes to those breaking virus rules, and some foreigners have had their work permits revoked.

Singapore has been mildly affected by the pandemic, reporting nearly 60,000 cases with 29 deaths.