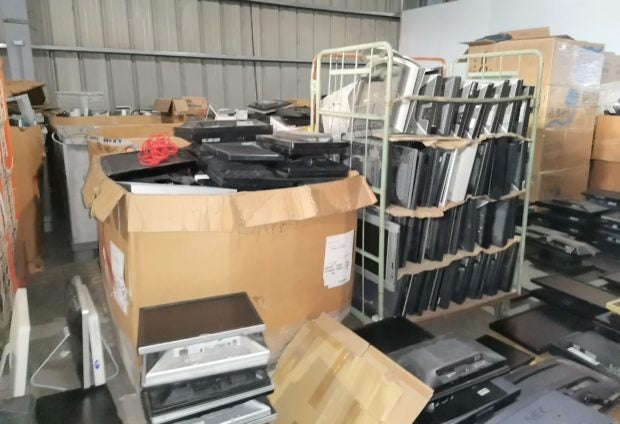 The Optical Media Board (OMB) discovered these brand-new computer monitors and used laptops at the ECR manufacturing facility at the Subic Bay Gateway Park. According to the OMB, the company has not secured an OMB license to sell these gadgets. (Photo courtesy of Subic Bay Metropolitan Authority)

SUBIC BAY FREEPORT –– Two employees of a manufacturing company here were caught illegally selling some P404,000 worth of laptops and monitors in an entrapment operation on Wednesday, said officials of the Subic Bay Metropolitan Authority (SBMA).

In a statement, Gerardo Johnson, officer-in-charge of the agency’s law enforcement department, said the Optical Media Board’s Enforcement and Investigation Division (OMB-EID) carried out the operation at 3:30 p.m. at a gasoline station.

The OMB eventually seized 65 units of brand-new monitors valued at P1,600 each and 75 units of used laptops valued at P4,000 each.

Johnson said the company was selling laptops and monitors through the Facebook account of one of the employees caught in the operation.

Zhonghua Yuan, a Chinese national identified as quality control manager of the company, was held for questioning.

Based on its Certificate of Registration and Tax Exemption (CRTE), ECR World Technology (PH) Inc. is engaged in the assembly and manufacturing of electronic equipment such as LCD/LED television sets, desktop computers and peripherals, laptops, DVD players, and electronic goods.

But during the inspection, it was found out that the firm had no OMB license and official receipt that would allow it to sell computer monitors and laptops.

The company located at the Subic Bay Gateway Park was charged with violation of Republic Act 9239 or the Optical Media Act of 2003.

Section 13 of the Act required those engaged in the importation, exportation, acquisition, sale, or distribution of optical media to register with and secure appropriate licenses from the OMB before engaging in said business activities. INQ