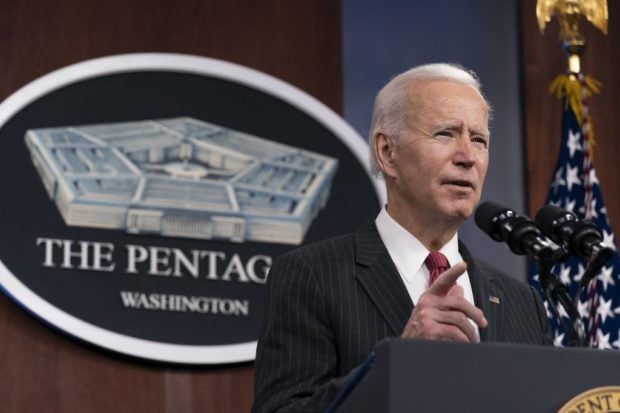 BEIRUT — The US military has struck Iran-backed militias in eastern Syria, killing at least 22 fighters according to a war monitor, in what the Pentagon said was a message from the new administration after recent rocket attacks targeting US troops in Iraq.

In its first military action against Iran-linked groups since Joe Biden became president five weeks ago, the Pentagon said it had carried out air strikes on Thursday at a Syria-Iraq border control point used by Iran-backed groups, destroying “multiple facilities.”

“These strikes were authorized in response to recent attacks against American and coalition personnel in Iraq, and to ongoing threats to those personnel,” he said.

The Syrian Observatory for Human Rights said at least 22 fighters were killed when the strike hit three trucks loaded with munitions coming from Iraq near the Syrian border town of Albu Kamal.

It said all the dead were from Iraq’s state-sponsored Hashed al-Shaabi force, an umbrella group that includes many small militias with ties to Iran.

Syrian state television condemned the “American aggression” against the fighters, who are allied with the Damascus government.

The US action followed three rocket attacks on facilities in Iraq used by US and coalition forces fighting the Islamic State group.

One of those strikes, on a military complex in the Kurdish regional capital Arbil on February 15, killed a civilian and a foreign contractor working with coalition forces, and wounded several US contractors and a soldier.

The attacks in Iraq laid down a challenge to the new Biden administration just as it opened a door to resumed negotiations with Tehran over its nuclear programme.

Last week, the administration offered talks with Iran led by European allies as it seeks to salvage a 2015 nuclear deal, left on the brink of collapse after Biden’s predecessor Donald Trump withdrew from it.

But the administration has also made clear it will not brook “malign activities” in the region by Iran.

Although Kataeb Hezbollah did not claim responsibility for the attacks, US Defense Secretary Lloyd Austin said that the powerful pro-Iranian group was behind them.

“We’re confident in the target we went after. We know what we hit,” he told reporters on the plane flying back to Washington after a tour of the aircraft carrier USS Nimitz off the California coast.

“We are confident that the target was being used by the same Shia militia that conducted the strikes” against US interests in Iraq, he said.

Iran is believed to be searching for an opportunity to avenge the US assassination of top general Qasem Soleimani one year ago.

Soleimani, a senior Revolutionary Guards commander, was Iran’s key liaison to its allies in Iraq and Syria, and elsewhere in the region.

He was killed in a US drone strike just as he arrived in Baghdad for meetings with top Iraqi officials.

State Department spokesman Ned Price said Monday the US would “hold Iran responsible for the actions of its proxies that attack Americans” but would not “lash out” and risk destabilizing Iraq.

Kirby called Thursday’s strike “proportionate” and said it “was conducted together with diplomatic measures,” including consultation with US partners in the anti-IS coalition.

“The operation sends an unambiguous message: President Biden will act to protect American and coalition personnel,” he said.

“At the same time, we have acted in a deliberate manner that aims to de-escalate the overall situation in both eastern Syria and Iraq,” he added.