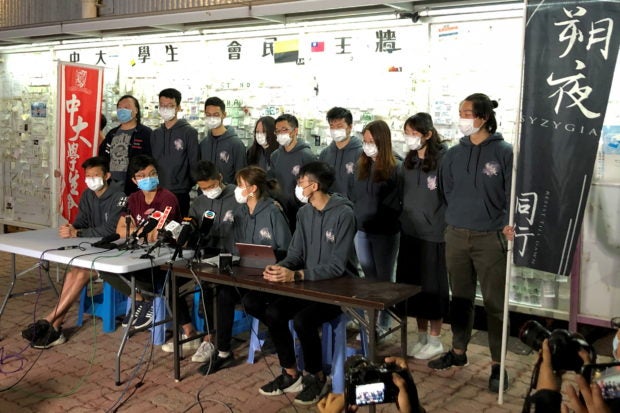 HONG KONG — The Chinese University of Hong Kong has withdrawn recognition of its student union, saying criticism of the city’s national security law by newly elected union leaders may have been illegal.

The move, accusing the union of having “exploited the campus” for “political propaganda,” raises further concern about academic and political freedom in the Asian financial hub after Beijing imposed a sweeping security law in June.

Students have been at the forefront of mass pro-democracy protests in 2019 and authorities are keen to quash dissent in schools and universities, which Beijing and city officials have blamed for fostering anti-government sentiment.

At a midnight news conference, union leader Isaac Lam, 20, said, “We will continue to pursue democracy and freedom, despite the crackdown.”

In its manifesto, Syzygia, the union’s newly elected executive committee, had accused the university of “kowtowing to the regime” and vowed to fight it, saying the security law infringed basic human rights and freedom.

After Wednesday’s election, the university, which ranks 13th in Asia and 43rd in the world according to its website, said it would stop collecting fees on behalf of the union.

It would also require the student body to register as an independent society to assume legal responsibility for itself.

Members of the union will also be suspended from all other positions on university committees.

Ties between the university and the union had already been sour before the union elections. The university had called in police after a conflict with students over security checks and an unofficial graduation ceremony that turned into a protest.

Nine people were arrested over the protest, four on suspicion of violating the new law, which sets punishments of up to life in prison for anything China sees as subversion, secession, terrorism or collusion with foreign forces.