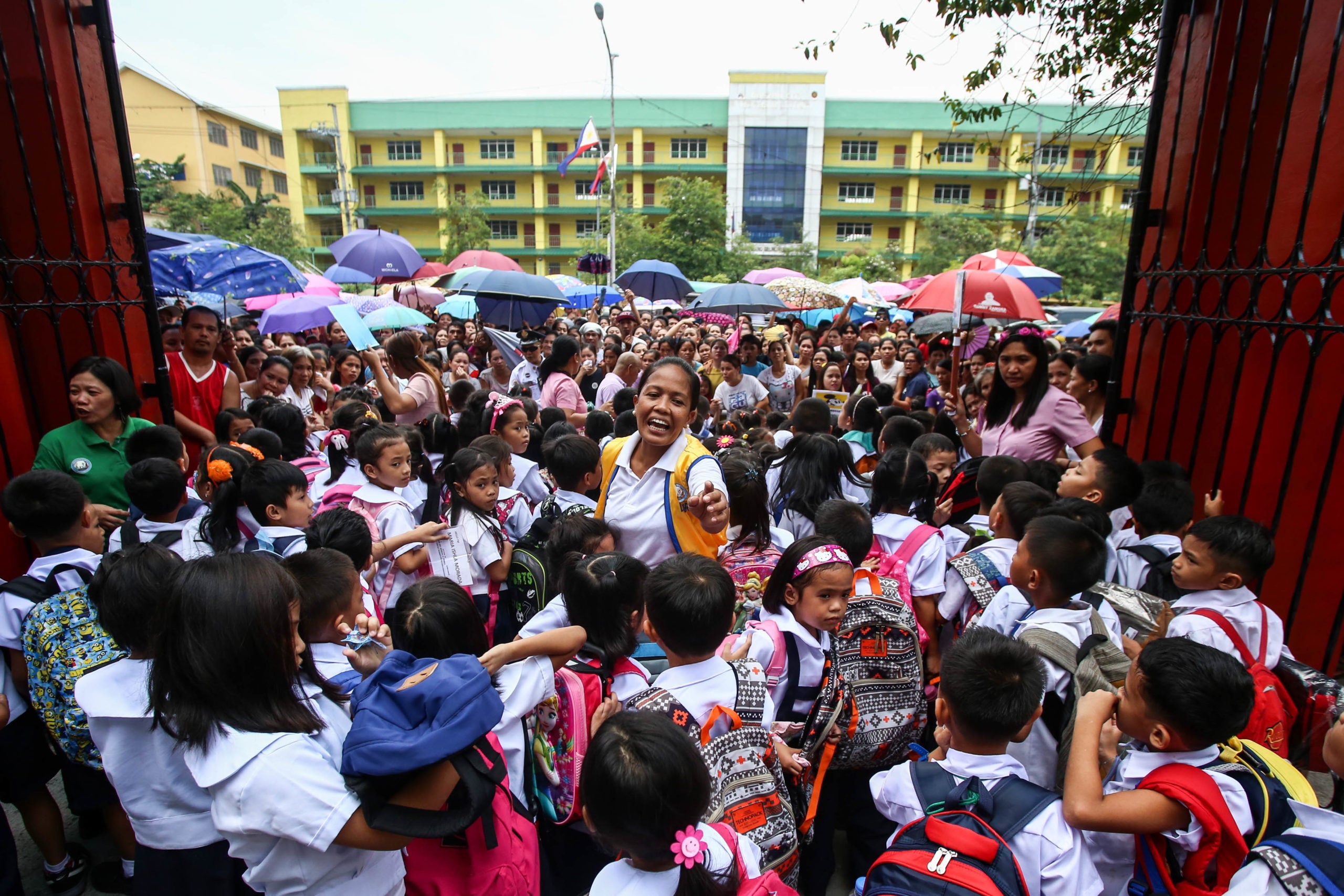 AS USUAL File photo shows the common situation in most public schools in the country on Day 1 of school. —INQUIRER PHOTO

Resuming in-person classes in Metro Manila and other urban areas is “too risky” without an assured supply of COVID-19 vaccines, the House committee on education chair, Rep. Roman Romulo, said on Thursday.

Romulo supported the decision of President Duterte to delay the resumption of classes until after the delivery of vaccines as senators urged the resumption of in-person classes without dealing with the local reality of classroom shortages, poor sanitation and absence of nurses in public schools.

“For [Metro Manila] and other urban cities, the congestion and density of population where DepEd (Department of Education) schools are located may be too risky to have [in-person] classes without a vaccine,” he warned.

“As long as there’s no vaccine, I’m certain that there shouldn’t be any [in-person] classes in Metro Manila and urban centers. Even if it’s just a pilot. People’s lives are more important,” Romulo said.

Romulo said the DepEd could consider in-person classes for schools outside Metro Manila or urban cities if “the COVID map done by DepEd and the DOH (Department of Health) shows no or minimal COVID-19 cases.”

He said coordination with the concerned local government and the DOH must be done “to ensure the proper implementation of minimum health protocols.”

“The learning by our students should not be an either-or proposition. Meaning either distance learning or [in person]. In situations where it is too risky to pilot [in-person] classes, my suggestion to DepEd is to further adjust the curriculum,” he said.

“There is one thing that we cannot afford—another lockdown. If cases surge in highly urbanized areas, we will not have a choice but to impose lockdown,” Cayetano said.

“But in low-risk areas, if the DepEd and local officials agree, why not? So if the risk of COVID-19 there is low, [in-person classes are] still better,” he added.

“Definitely not in Metro Manila,” he said on Thursday. “There is no doubt that the best [option] is [in-person], but given that there is still no vaccine and given that we have teachers who are senior citizens and have sickness, it will be difficult for areas with high COVID cases.”

Cayetano warned of the increase of COVID-19 cases if the government resumes physical classes in urban areas.

The two lawmakers made the remarks after senators on Wednesday agreed to pass a resolution urging the executive department to resume classes even if there was still no vaccine available in the country and the public school system was plagued with perennial problems.

Sen. Sherwin Gatchalian, chair of the Senate education committee, delivered a privilege speech pushing for the resumption of classes mainly because of its economic impact.

Gatchalian’s position appeared to be backed by most senators who agreed to pass the resolution on Monday.

Gatchalian, who earlier cited studies from Pennsylvania in the United States that supported the resumption of classes, presided over a hearing where a representative of the United Nations Children’s Emergency Fund apprised senators of the situation in wealthier countries, but classroom shortages or poor school sanitation was not discussed in the hearing.

Romulo, however, said: “Instead of relying on foreign data which may not have the same physical situation as what we have in the [Metro Manila], DepEd should form a team of experts in science and medicine to advise them properly.”

The DepEd, however, clarified on Wednesday that it would abide by Mr. Duterte’s order to postpone the pilot testing of limited in-person classes, saying it would continue to prepare “action plans” for the study.

In a statement, the agency reiterated that in-person classes would only be conducted in areas categorized as low-risk for COVID-19 transmission, particularly those that are under modified general community quarantine.

“We understand that the availability and rollout of vaccines in the country are critical factors for this undertaking. In the meantime, we shall continue preparing action plans for this activity should the President give his approval in the coming months,” the DepEd said.

On Monday, Mr. Duterte again thumbed down the DepEd’s call to conduct limited in-person classes, citing health risks for students and the need for the government to first roll out its vaccination program. —WITH REPORTS FROM MELVIN GASCON AND JULIE M. AURELIO