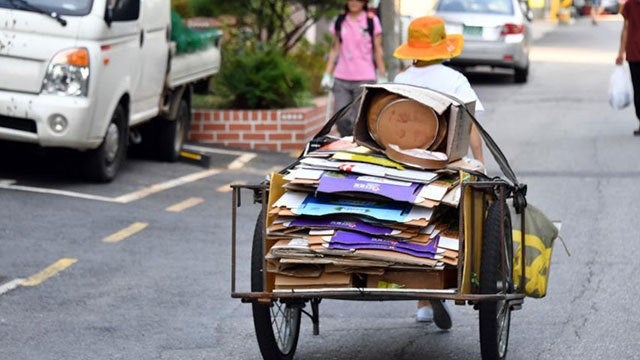 A senior citizen drags a handcart full of cardboard through the streets of Seoul. (Yonhap) via The Korea Herald

SEOUL — When the temperature dropped to minus 7 degrees Celsius in mid-February, Lee Deok-ja, 74, was dragging her handcart around Deungchon-dong, western Seoul, picking up cardboard.

It was about 12:30 p.m. and her handcart was empty. Lee said she had already been to the junk shop three times that day. Instead of filling up the handcart — which appears to weigh more than 40 kilograms when empty — the petite lady chooses to go to a junk shop several times a day and fill her cart little by little.

Lee said she starts work every day at 5:30 a.m. and continues picking up cardboard until 6 p.m.

Lee and her husband ran a noodle factory around 25 years ago, but the business failed and they accumulated significant debt. Her husband died 10 years ago and she lives alone now.

“I have four children, but I don’t get an allowance from them. I don’t want to be a burden to my children. I will do this as long as I can move my body,” she said with a kind smile.

It is not known exactly how many elderly people pick up cardboard in Seoul, as it is not an officially recognized job, nor are they on anyone’s payroll, said So Jun-chol, author of “Path of Poor,” a book based on interviews with some 60 elderly women who picked up cardboard for a living.

Like Lee, many of the women So interviewed had seen their businesses fail during the Asian financial crisis of the late 1990s and never recovered from those failures.

“Although their circumstances are all different, most of them come out into the street because it is hard to make ends meet on basic pension alone,” So said.

Basic pension refers to a social program for senior citizens aged 65 or older who fall into the bottom 70 percent income bracket. It normally pays 200,000 won to 300,000 won per month.

“Not only cardboard, they pick up and sell everything that can be recycled. They collect plastic, boxes, newspapers, books, electrical appliances and even wooden furniture,” he said.

Although prices vary day by day, waste paper costs about 40 won per kilogram. A full handcart might contain around 200 kilograms of paper, bringing in approximately 8,000 won, the author said.

People should not turn away from the sight of older people picking up cardboard, or “self-portraits of South Korea,” said Kim Bum-jung, a professor at Chung-Ang University’s Department of Social Welfare, who specializes in the welfare of senior citizens.

“Korea is the 10th-largest economy globally, but elderly poverty here is overwhelmingly the highest among OECD countries,” Kim said.

The elderly poverty rate in Korea was 43.4 percent in 2018, three times the OECD average of 14.8 percent, according to the latest report released by the Korea Economic Research Institute. Worse, Korea is rapidly becoming a superaged society with 8.12 million people aged 65 or older accounting for 15.7 percent of the total population in 2020.

Statistically, around half of senior citizens are still not prepared for old age, Kim said.

“This means the rest should rely on around 300,000 won per month or an allowance from their children, which continues to be declining,” he said.

This gloomy situation drives old people — even those who have no skills or work experience — back to work.

“But, in a nation where there are not enough jobs even for young people, what can old people do? They have to do chores, or those who can’t even afford it have no choice but to pick up cardboard — even knowing it is the lowest job,” he said.

There are no easy solutions to the problem of elderly poverty as senior citizens are already the class that receives the most support from the government, the professor said.

“Because private income is something that the nation cannot do, raising the amount of basic pension and wages of public jobs for the elderly is the best the government can do for now,” he said.

The public sector hires senior citizens for nonregular jobs that usually pay around 300,000 won per month.

Read Next
China denies that US diplomats required to take anal swab tests for COVID-19
EDITORS' PICK
Smart three-peats as country’s fastest mobile network – Ookla
Would the military allow me to stay this long if I’m inutile? – Duterte
In good spirits: SMDC helps farmers and residents through Kadiwa Market
Pre-order the new vivo Y20s [G] to get a free TWS earphone
65% of Filipinos say Duterte’s health should be made public – SWS
DSWD chief admits ‘slow start’ in distribution of aid in ‘NCR Plus’
MOST READ
Vico Sotto frets getting photos of ‘butt vaccination’ from Pasig dwellers
Metro Manila to have shortened curfew hours from 8 p.m. to 5 a.m. under MECQ
San Miguel Corp. continues to invest heavily in the Philippines’ future
COVID-hit Roque slams ‘un-Christian’ query on how fast he secured hospital bed
Don't miss out on the latest news and information.