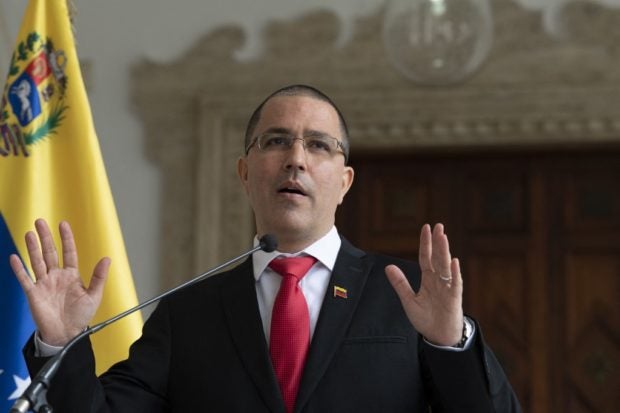 CARACAS — Venezuela on Wednesday expelled the European Union’s ambassador to Caracas in response to new sanctions, giving the Portuguese envoy 72 hours to leave the country and raising the bloc’s renewed ire.

“She has been given 72 hours to leave Venezuelan territory.”

In Brussels, the EU demanded Venezuela reverse its decision.

“The EU profoundly regrets this decision, which will only lead to further international isolation of Venezuela. We call for this decision to be reversed,” said spokeswoman Nabila Massrali.

“Venezuela will only overcome its ongoing crisis through negotiation and dialogue, to which the EU is fully committed but which this decision undermines directly.”

Maduro issued a warning in a televised address.

“We would not have wanted to do this, we’re doing it against our will, because we want to have the best relations with all of Europe,” said Maduro.

“But we cannot accept that anyone attacks Venezuela, sanctions Venezuela.

“Either you rectify it or there will be no relationship with you, of any type.”

‘Arrogance of the dictator’

Venezuela’s National Assembly, controlled by Maduro’s party, called Tuesday for the government to expel the ambassador following Monday’s decision by the EU, which brought to 55 the number of regime members targeted by asset freezes and travel bans by the bloc.

The EU expanded the list after rejecting a December legislative election that saw Maduro win control of parliament after an opposition boycott.

The election results were not recognized by the EU, the United States or several Latin American countries.

Until the win, the National Assembly had enjoyed an opposition majority with Juan Guaido at the helm as speaker — the only branch of government not under Maduro’s control.

Guaido is considered Venezuela’s legitimate head of state by some 50 foreign governments, while Maduro is subject to Western sanctions and labeled a dictator over alleged voter fraud and other abuses.

“The arrogance of the dictator after the (electoral) fraud is isolating him ever more from the world and he plans to drag the country down with him,” Guaido wrote on Twitter.

The EU said Monday that individuals on the expanded list are “responsible, notably, for undermining the opposition’s electoral rights and the democratic functioning of the National Assembly, and for serious violations of human rights and restrictions of fundamental freedoms.”

Among the newly-sanctioned officials are two members of the National Assembly, the governor of Zulia state, the commander of the armed forces and three members of Venezuela’s electoral council, including its president.

“The sovereign decisions not to deal with those that commit human rights abuses or undermine democratic institutions, remain an important tool for restoring democracy,” said James Story, the US ambassador to Venezuela, who is based in Colombia.

Arreaza on Wednesday described the European measures as “illegal”.

“Hopefully there will be reflection in the European Union, hopefully we will be able to rebuild the bridges of understanding, of dialogue, hopefully they will learn to respect,” he said after giving the ambassador her marching orders.

The bloc began imposing sanctions on Venezuela in 2017 and has also imposed an embargo on arms that could be used in internal repression.

In June, after a previous round of European sanctions, Maduro had also declared Brilhante Pedrosa persona non grata and gave her 72 hours to leave the country. When the deadline passed, however, the government backed down.