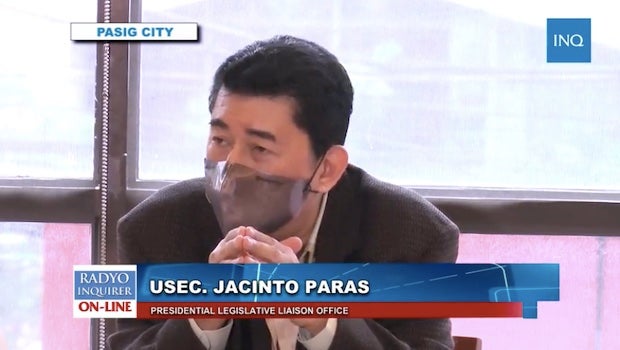 MANILA, Philippines — Undersecretary Jacinto Paras of the Presidential Legislative Liaison Office (PLLO)  has filed a complaint against Quezon Rep. Angelina Tan over her “libelous” privilege speech that allegedly spread false allegations against him.

In her privilege speech on Feb. 8, Tan hit a TikTok video that she said “imputes corruption allegations” against her and her husband, DPWH Regional Director Ronnel Tan.

The TikTok video, the lawmaker said, had a caption below the photos of her and her husband that read: “Exclusive: DOJ urged to probe Cong. Helen Tan’s hospital for graft.”

On the upper portion of the photo, the words “corrupt officials” were written, Tan said. The lawmaker said the said video has since been deleted.

Citing an investigation conducted by the National Bureau of Investigation, Tan said the video was attributed to the website www.sovereignph.com, which is connected to Sovereign News Publishing.

She then cited the Department of Trade and Industry (DTI) in saying that a business named Sovereign News Publishing has Jacinto declared as its owner.

But Paras said Tan’s allegation was “groundless and false as I did not post any video on Tiktok.”

“This statement was clearly made up to injure and ridicule me and exposed me for public hatred, contempt and ridicule,” Paras said in his complaint.

“The speech of respondent Tan accusing me of false claims is highly libelous as it portrayed me as a dishonest and lying government official to the prejudice and damage of my good reputation as a high performing and highly competent official of the government,” the complaint adds.

In the same privilege speech, Tan also mentioned Paras’ alleged involvement in a cellphone theft case inside the House of Representatives. Paras previously served as a representative for Negros Oriental.

“Undoubtedly, respondent Tan’s speech stating that I was involved in theft of cellphone is utterly libelous, false, malicious, and was simply calculated to malign or grievously injure my name, honor, or reputation,” Paras said in his complaint.

Asked to comment on the libel case filed against her, Tan told INQUIRER.net: “No reaction. My lawyer will just attend to his complaint.”