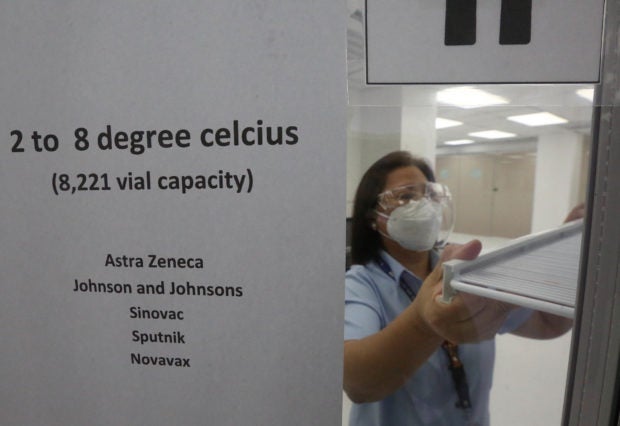 Medical workers conduct last-minute preparations of the Manila Covid-19 vaccine facility at the Santa Ana hospital in Manila on Tuesday, Feb. 23, despite a delay in the arrival of the vaccines in the country. Manila Mayor Isko Moreno has expressed his dismay over the delay after he signed a P38.4 million as an advance payment for  800,000 doses of AstraZeneca. (Photo by MARIANNE BERMUDEZ / Philippine Daily Inquirer)

MANILA, Philippines — It was already February when the government’s pandemic managers first informed the Senate of the dire need for an indemnity law, and yet they used the lack of it as an excuse for the country’s prolonged wait for coronavirus vaccines, the Inquirer learned on Tuesday.

Three senators said the COVID-19 managers never raised the urgency of the no-fault clause until this month, when the first batch of the vaccines was already supposed to have arrived, despite publicly available documents indicating it was a requirement.

No sense of urgency

The delay was only the latest in a string of costly errors by the government’s COVID-19 planners, resulting from their “piecemeal focus” in procuring vaccines, according to Sen. Nancy Binay, who noted previous blunders involving the country’s handling of nondisclosure agreements with drug manufacturers and cold chain requirements, among other things.

“Either they were clueless about the needed requirements or they simply had no sense of urgency,” Binay said in a statement to the Inquirer.

“But at that time it was not presented as a necessary or indispensable prerequisite to the purchase of vaccines,” Pangilinan said.

Senate Minority Leader Franklin Drilon said it was “only very recently” that the senators were told the country needed an indemnification law to get vaccines.

“Why did it take the [Inter-Agency Task Force for the Management of Emerging Infectious Diseases] so long to ask Congress to pass an indemnity law, or to submit the indemnity agreement to

COVAX?” he said, referring to the global vaccine pool led by the World Health Organization (WHO) and the vaccine alliance GAVI.

“Now I ask: Did somebody drop the ball again?” Drilon said in a statement to the Inquirer.

COVAX and other multinational pharmaceutical companies.

The Philippines, which has the second highest number of coronavirus cases and deaths in Southeast Asia, has not signed any supply contract for COVID-19 vaccines.

Duque declined on Tuesday to comment on the COVAX requirements and referred the matter to Secretary Carlito Galvez Jr., the chief of the national vaccination program, “as he was the one heading the negotiations.”

There was no immediate response from Galvez, who was still in a meeting on Tuesday night, according to a member of his staff.

By the last quarter of 2020, the Inquirer found that COVAX documents were already available online stating how all parties were supposed to hold the manufacturers free of liability in the event of harmful side effects from vaccination.

An October 2020 document from Unicef, a COVAX partner, said “all participants allocated vaccines through COVAX will be required to indemnify the manufacturer for the vaccines deployed in their territory.”

“Lack of such an indemnification will limit/delay access to vaccines,” it added.

Another document released by Asian Development Bank last December said GAVI was negotiating “a model indemnification agreement that will be incorporated into agreements with manufacturers and requiring all COVAX participating countries to indemnify the manufacturer for the vaccines deployed in their country.”

But not once through several congressional inquiries in November and December last year did Galvez expressly ask the Senate for an indemnification law.

In fact, the first Senate bill that would create an indemnification fund, filed by Binay on Jan. 25, did not mention any request by the COVID-19 task force to hold the manufacturers free of liability due to harmful side effects of vaccination.

Neither did the second one, filed by Sen. Ramon Revilla Jr. on Jan. 26.

It was only the third bill, authored by Senate President Vicente Sotto III and submitted on Feb. 16, that described the no-fault clause as “one of the requirements of the vaccine manufacturers.”

That was only after Galvez told the Senate on Feb. 11 that it was the country’s lack of an indemnification law that caused the delay in the arrival of the first batch of 117,000 doses of the Pfizer vaccine procured through COVAX.

“If we had an indemnification law, the Pfizer [vaccines] would have arrived by Feb. 12,” Galvez told the senators.

Sotto, in a message to the Inquirer, confirmed that Galvez did not ask the Senate for an indemnity bill. But that was “because Pfizer did not say so at first,” the Senate leader said.

Binay, however, said the COVID-19 planners appeared to have been unaware of the urgency of the no-fault requisite.

“If we are really serious in solving a public health problem in a pandemic level, we should never sacrifice the urgent for the important. [The] government has to immediately take action in handling the priorities when it comes to COVID response,” she said.

Drilon said: “By all indications, the COVID-19 managers have mismanaged the procurement of coronavirus vaccines in the same way that the government mismanaged the pandemic.”

What is puzzling, he said, is that President Duterte’s executive power is enough to meet the requirement.

“The recent submission by the government of indemnity agreements with COVAX is proof that the government can hold the manufacturers free and harmless, except in cases of gross negligence and willful misconduct, without going to Congress,” Drilon said.

The President “has full power to bind the country,” he said.

Nevertheless, the Senate passed a bill on Tuesday expediting vaccine procurement with a special provision for a P500-million indemnification fund. This is separate from the stand-alone measures filed by Binay, Revilla and Sotto, which are still pending in committee. (See related story on Page A6.)Health experts pointed out that COVAX requirements were the same for all countries and that these had been known since November last year, putting into question the claim of the government’s vaccine managers that they became aware of the indemnity agreement only recently.

“We just failed to do a vaccination checklist so we dropped the ball again,” said Dr. Tony Leachon, a health advocate and former adviser to the government’s coronavirus response.

“Blatant lies. The COVAX requirements are the same across the globe [and] already posted on [the] GAVI website,” said Dr. Gene Nisperos of Community Medicine Development Foundation.

Nisperos said the Philippines was not being singled out, as officials had implied, and hit the government for “just making up excuses” for failing to do due diligence.

Galvez, as well as presidential spokesperson Harry Roque, had said manufacturers were wary of supplying vaccines to the Philippines because of the lawsuit that another drug company, Sanofi Pasteur, faced due to the 2018 Dengvaxia controversy.

Asked on Tuesday if Mr. Duterte was holding anybody responsible for the delay in vaccine delivery, Cabinet Secretary Karlo Nograles said the President knew that the matter was in the hands of the manufacturers.

The government is doing all it can to comply with the requirements, he said.

“But at the end of the day, it’s really the vaccine manufacturers’ obligation, responsibility to ship it to us at [the] time that was promised,” Nograles told a news briefing.

Delivery dates for the AstraZeneca vaccine will be decided this week, Dr. Rabindra Abeyasinghe, the WHO representative to the Philippines, told a news briefing at the Department of Health on Tuesday.

The Philippines has completed all the requirements for the vaccines it is qualified to receive from COVAX, Abeyasinghe said.

“My understanding is that there is no requirement in the case of AstraZeneca for further exchange of letters, so we are optimistic that before the end of this week we will hear from the

COVAX initiative on the likely delivery dates of AstraZeneca vaccines to the Philippines,” he said.

Abeyasinghe confirmed that 5.5 million to 9.2 million doses of the AstraZeneca vaccine had been earmarked for the Philippines.

—WITH REPORTS FROM LEILA B. SALAVERRIA, PATRICIA DENISE M. CHIU AND MARICAR CINCO

Read Next
Wanted: Other ways to reopen economy
EDITORS' PICK
A laptop that maximizes your WiFi so you can maximize your productivity
‘FPJ’s Ang Probinsyano’ officially ends after nearly 7 years
Authors unbowed after gov’t ‘purge’ of books
House energy committee chair Arroyo bats for cheap electricity
Powered by style, innovation and passion
Red-tagged green activist recalls imprisonment
MOST READ
Arjo Atayde reveals proposal to Maine Mendoza was ‘more than a year’ in the making
‘FPJ’s Ang Probinsyano’ officially ends after nearly 7 years
SC: Natural-born dual citizens may not renounce foreign citizenship
Angelica Panganiban, Camille Prats recall ‘trauma’ of being called out for weight gain in ‘G-mik’
Don't miss out on the latest news and information.