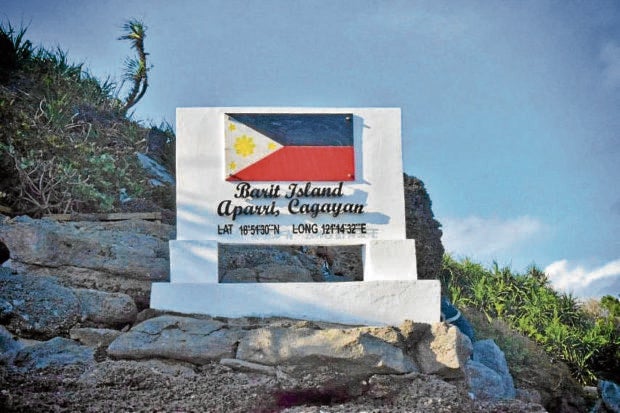 NORTHERN FRONTIER The military placed this marker on Barit Island in Aparri, Cagayan, to assert the Philippines’ maritime territory in its northernmost region. —PHOTO COURTESY OF THE MILITARY’S NORTHERN LUZON COMMAND

Lt. Gen. Arnulfo Burgos Jr., commander of the military’s Northern Luzon Command, said the markers were installed in prominent areas on the islands of Mabaag and Barit from Feb. 18 to Feb. 19.

The islands, estimated to be 7.3 square kilometers (2.8 square miles), are situated 70 kilometers north of Aparri and are near Fuga, one of the town’s 42 villages.

In a statement, Burgos said the markers would assert that these areas were maritime territories of the country and would be visible to vessels passing by the country’s northern maritime territory.These would also secure the areas known as “key sources” of livelihood due to their abundant marine resources and strategic trading routes, Burgos said. President Duterte, in August last year, directed the Cagayan Economic Zone Authority (Ceza) to set aside 20 hectares on Fuga for a “naval detachment” of the Philippine Navy.

The President’s order came after reports that Chinese investors were planning to take over the 10,000-hectare island located in the country’s second northernmost island group.

But Ceza officials denied any investment plans on Fuga.

Navy personnel held a flag-raising ceremony with island residents, also in August last year, to assert sovereignty over the territory.

According to Commodore Caesar Valencia, head of the Naval Forces Northern Luzon, the newly installed markers would help the government ensure that Philippine sovereignty would be recognized in these areas.

Mabaag and Barit, and their surrounding territorial waters are an “integral part of the country’s territory,” he said.

Last year, 11 sovereign markers were also installed in uninhabited islands north of the province within the Babuyan Channel in Batanes province.