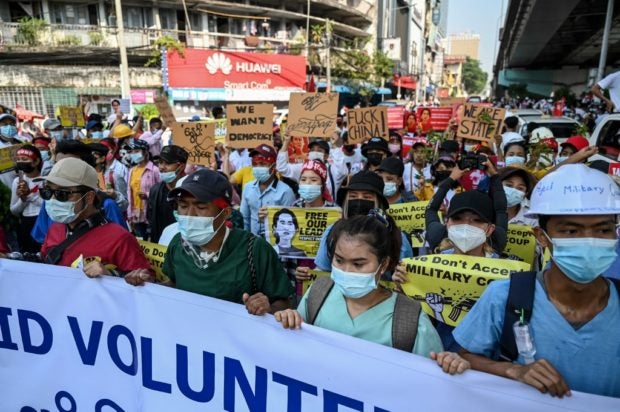 Protesters take part in a demonstration against the military coup in Yangon on February 22, 2021. Photo by Ye Aung THU / AFP

As protests continue across the country, despite the military’s threat to use deadly force against demonstrators, here is a recap of events:

Back to the old days

It ends Myanmar’s decade-long experiment with democracy after close to half a century of military rule.

The generals claim fraud in November’s elections, which Suu Kyi’s National League for Democracy (NLD) party won by a landslide.

The putsch draws global condemnation, from Pope Francis to US President Joe Biden.

Two days after the coup, authorities bring an obscure charge against the 75-year-old Suu Kyi — over unregistered walkie-talkies at her home, an offense under Myanmar’s import and export law.

Resistance to the coup begins with people banging pots and pans — a practice traditionally associated with driving out evil spirits.

The junta tries to block social media platforms including Facebook, which is hugely popular in Myanmar. Later, nightly internet blackouts are imposed.

Suu Kyi, not seen in public since the coup, is under house arrest and “in good health”, her party says.

Popular dissent surges over the weekend of February 6 and 7, with tens of thousands of people gathering on the streets calling for the release of Suu Kyi.

Defiance spreads with a third straight day of protests on February 8 and a nationwide strike as hundreds of thousands of people join anti-coup rallies across Myanmar.

The military warns of a crackdown and imposes night-time curfews including in Yangon, Mandalay and Naypyidaw — the country’s three biggest cities.

But despite bans on gatherings of more than five people, the protests continue.

Two people are wounded after police fire on crowds in Naypyidaw on February 9, with one young woman shot in the head.

Despite the violence and a raid on the NLD’s party headquarters in Yangon, tens of thousands of people take to the streets of the city for a fifth successive day.

UN special rapporteur Tom Andrews warns that the junta “can’t steal the hope and resolve of a determined people.”

The United Nations demands the immediate release of Suu Kyi two days later and deems the use of violence against protesters “unacceptable”.

Min Aung Hlaing suspends laws requiring warrants for searches on February 13 as the junta warns the public not to hide protesters.

The next night, security forces fire on protesters and arrest journalists in the country’s north.

On February 16, Suu Kyi’s lawyer says she has been hit with a second charge, this time under the country’s natural disaster management law.

The next day, thousands rally in Yangon vowing to “fight till the end”, despite the build-up of troops and fears of escalating violence.

On Friday, the protester shot 10 days earlier dies, becoming a symbol of opposition to the junta.

Over the weekend, three more demonstrators are killed and around 30 injured as police fire on protests in Mandalay and Yangon.

The junta warns late Sunday that it is prepared to use lethal force, and the foreign ministry rails against “flagrant interference” by foreign governments in its internal affairs.

Despite the threats, hundreds of thousands of anti-coup protesters rally again on Monday.

UN chief Antonio Guterres condemns the junta’s “brutal force” and demands an end to the repression.

The European Union later agrees to sanctions the military, and to withhold some development aid.