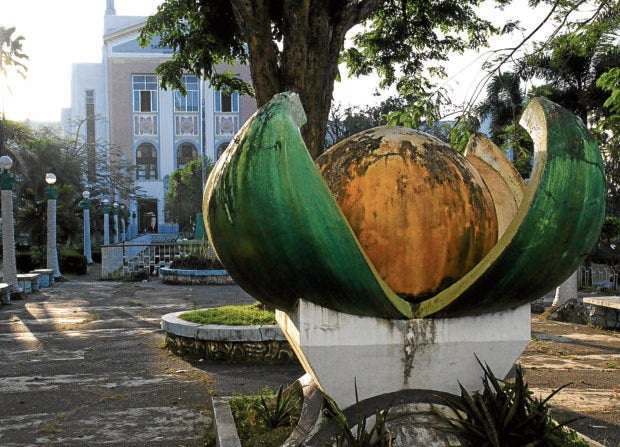 SYMBOL A concrete image of a coconut stands in Perez Park in front of the provincial capitol building in Lucena City symbolizing Quezon as a major coconut producing province in the country. —DELFIN T. MALLARI JR.

In a statement on Monday, Katarungan spokesperson Jansept Geronimo said farmers were worried that the fund “can be targeted for self-serving interest by those in power” or that the fund, “given the lack of government resources, will be used to pay for COVID-19 vaccines.”

Geronimo said the farmers feared that what happened to the Philippine Health Insurance Corp. (PhilHealth) fund, which has been embroiled in anomaly, could also happen to the coco levy fund.

PhilHealth officials have been accused of pocketing some P15 billion through the controversial interim reimbursement mechanism, or advanced payment to health-care institutions.

Geronimo warned that any misuse of the coco levy fund will be a betrayal of President Duterte’s promise to return it to coconut farmers.

The collection of the levy from coconut farmers started in 1971 during the term of the late dictator Ferdinand Marcos. After the fall of the Marcos regime, various suits were filed to give the fund’s control to coconut farmers.

In 2012, the Supreme Court declared that the coco levy fund belonged to the government for the benefit of the country’s coconut farmers.

The fund, now with the government, was estimated to be around more than P100 billion.

Katarungan noted that the debts incurred by the government to address the pandemic have piled up that it has to pay a record P1.79 trillion in borrowings this year, a sizable chunk of the country’s P4.51-trillion budget for 2021.

Geronimo said it was possible that the farmers would only allow the levy fund to be used by the government during this pandemic “if it can contribute to the economic recovery of coconut farming areas through programs and services that directly benefit poor coconut farming communities.”

He emphasized that farmers play a vital role in the current food crises by increasing food production with the right support from the government.

During the 2016 presidential campaign, Mr. Duterte, promised in Catanauan town, Quezon province, that the funds would be distributed to coconut farmers within 100 days of his presidency. But in 2019, he vetoed the measure seeking to create a P100-billion trust fund for coconut farmers.