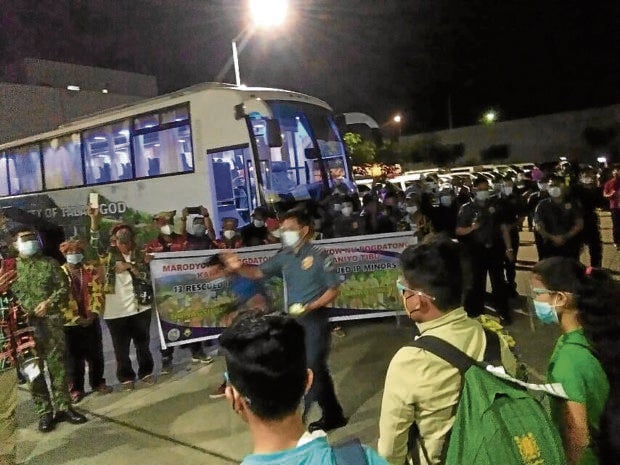 HOMEWARD BOUND Policemen brief a group of young “lumad” (indigenous peoples) as they prepare to leave Cebu City for their home province of Davao del Norte. —PHOTO COURTESY OF THE POLICE REGIONAL OFFICE IN CENTRAL VISAYAS

CEBU CITY, Cebu, Philippines — Thirteen minors from an indigenous group in Davao del Norte province who were taken in what police described as a “rescue” operation inside a university here have returned home.

According to Col. Robert Limbawan, head of the Regional Intelligence Division of the Central Visayas police, the minors from the Ata Manobo tribe arrived at Francisco Bangoy International Airport in Davao City at 7:15 p.m. on Sunday.

The six other minors who were “rescued” at the University of San Carlos (USC) Talamban Campus will also be sent home in the coming days, he added.

Lawyer King Perez, communication and advocacy officer of Children’s Legal Bureau Inc. (CLB), said he was at Mactan Cebu International Airport to try but failed to stop seven of the minors from leaving.

CLB, in a statement, said the parents of the seven minors have sought the assistance of CLB and the concerned youngsters were transported back to Davao City without their parents’ consent.

“While their parents have been informed about this development, we are yet to receive information on the proper turnover of the students. We will also consult with our clients on possible legal actions to be taken after this incident,” Perez said.

CLB, a nonstock, nonprofit organization providing legal assistance to minors, was closely monitoring the movement of the students involved, he said.

On Feb. 15, the police conducted a controversial “rescue operation” at USC after six parents from Talaingod town allegedly sought the help of authorities to get their children back.

The minors and their teaching companions arrived in Cebu last year for an education tour but were stranded in the city because of the pandemic and were sheltered at the USC Talamban campus. Instead, police claimed they were allegedly forcibly held without the consent of the minors’ parents, a matter vehemently denied by the USC administration that housed and fed them.

Sixteen of those “rescued” were below 18 years old while three others were over 18 years old.

Charges of kidnapping, child abuse, and a violation of Republic Act No. 9208 or the Anti-Trafficking in Persons Act of 2003, were subsequently filed against two volunteer-teachers and five “lumad” (indigenous peoples) leaders for bringing the 19 children to Cebu City allegedly without their parents’ consent.

The accused, assisted by the National Union of Peoples’ Lawyers, opted to undergo a preliminary investigation to give them the chance to answer the accusations hurled against them.

Perez earlier said the cases were filed in the Davao City Prosecutors’ Office, which has jurisdiction over the place where the alleged illegal acts were committed.