More areas under Signal No. 1 as Auring maintains strength 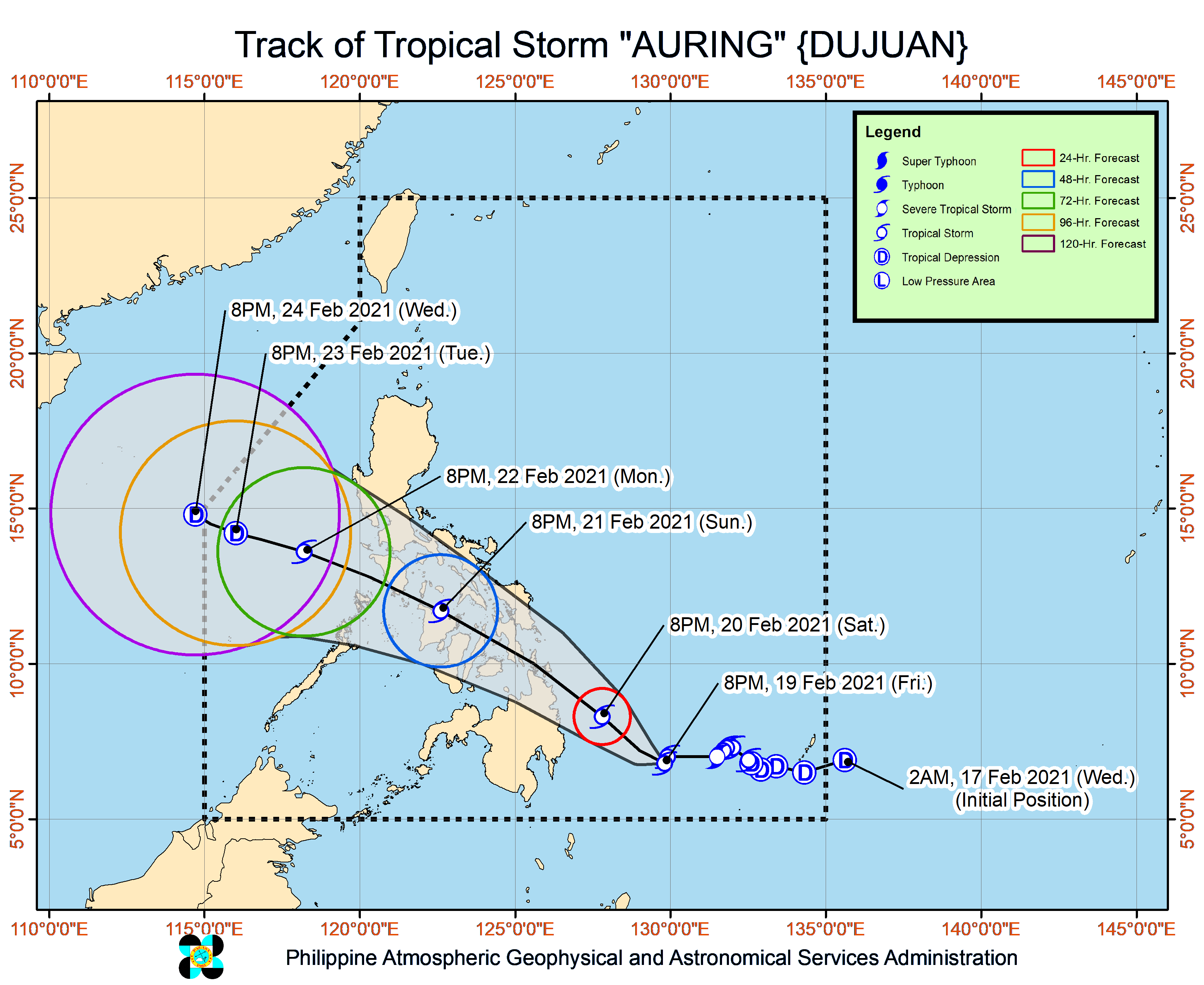 MANILA, Philippines — More areas were placed under the Tropical Cyclone Wind Signal No. 1 warning as of Friday night, as Tropical Storm Auring maintained its strength.

The latest severe weather bulletin from the Philippine Atmospheric, Geophysical and Astronomical Services Administration (Pagasa) said that the following areas are now under Signal No. 1:

Pagasa said that Auring still packs maximum sustained winds of 85 kilometers per hour (kph) near the center, and gustiness of up to 105 kph.  It was last seen 435 kilometers east southeast of Hinatuan of Surigao del Sur, moving very slowly over eastern Mindanao waters.

State meteorologists meanwhile said it is possible for Auring to remain as a tropical storm while crossing the country, possibly due to dry winds from the northeast monsoon or amihan.  However, Pagasa does not rule out a scenario where it would re-intensify into a severe tropical storm.

During the same time, Eastern Visayas, Central Visayas, the rest of Northern Mindanao, Lanao del Sur, Cotabato, and Davao City would be affected by light to moderate with at times heavy rains.

Auring is then expected to make landfall and graze the northern tip of Caraga by Sunday morning.  After which, Auring would start to speed up, moving from Caraga to north of Cebu within hours, and hovering 20 kilometers northwest of Roxas City in Capiz.

From the Panay Island, it would move to waters between northern Palawan and eastern Mindoro, before exiting the landmass through the West Philippine Sea by Monday night.

Auring may leave the Philippine area of responsibility by Wednesday night, weakening as a tropical depression after it faces cold and dry winds from the amihan.

Pagasa warned that landslides and flash floods are possible in high risk spots, especially those in low-lying areas and those near mountain slopes.

As of now, gale warnings are still in place over the entire seaboards of Luzon, Visayas, and Northern Mindanao, because of Auring and the amihan.  This means sailing is risky over these areas, while any form of sea travel is already suspended over coastlines of areas under Signal No. 1.