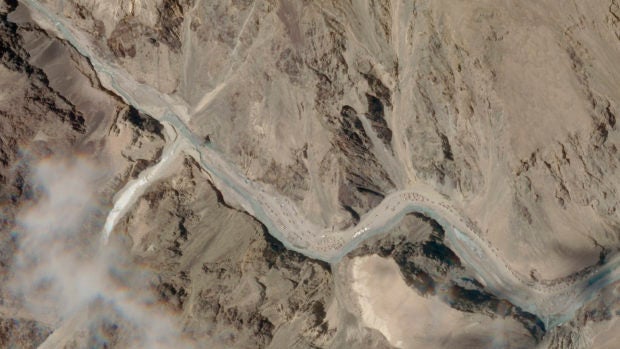 (FILE PHOTO) This satellite photo provided by Planet Labs shows the Galwan Valley area in the Ladakh region near the Line of Actual Control between India and China Tuesday, June 16, 2020. A clash high in the Himalayas between the world’s two most populated countries claimed the lives of 20 Indian soldiers in a border region that the two nuclear-armed neighbors have disputed for decades, Indian officials said Tuesday. (Planet Labs via AP)

BEIJING —  China for the first time on Friday gave its detailed account of a bloody Himalayan border clash with Indian troops in June 2020, including how four of its soldiers died.

China and India have blamed each other for the clash. India has previously said 20 of its soldiers died in the clash, while Beijing had acknowledged casualties but had not disclosed details before.

When asked why China was only revealing details now, a foreign ministry spokeswoman Hua Chunying said at a news briefing it is because there had been too many “rumors, lies and fake news” since.

Asked if this means no other Chinese soldiers died during the whole standoff that stretched for eight months after the June clash, Hua said: “Yes, I understand that’s the case.”

A Chinese defense ministry spokesman Ren Guoqiang told the media on Friday that while China had remained restrained to calm the situation, India had repeatedly “hyped about the casualties, misled international opinion and slandered Chinese border troops.”

There was no immediate response from the Indian military.

But a top military commander overseeing the negotiations with the Chinese to disengage from the disputed areas told Indian media earlier in the week that their assessment was the number of Chinese casualties was much higher during the hand-to-hand combat in the Galwan Valley.

“We were able to count a large number of casualties, which were being picked up on stretchers and taken back. More than 60 actually, but whether they were fatal or non-fatal, we can’t say with authority so I will not give a figure,” lieutenant general Y.K.Joshi told CNN-News18 in an interview.

A report by PLA Daily, the official newspaper of the Chinese military, said that Indian troops had been trying to unilaterally change the status quo at the border since April 2020 by building bridges and roads and crossing over the line of control.

When Qi Fabao, a regimental commander, brought a few soldiers to negotiate with the Indian troops in June, he was “violently attacked with steel pipes, clubs and stones,” state television CCTV said.

Chinese troops reinforced Qi and forced Indian troops to retreat, who “held their heads as they escape, left behind many wounded soldiers behind the line, and paid a heavy price,” said the PLA Daily.

The two countries have sought to de-escalate the situation at the border, though there was another “minor face-off” between Indian and Chinese troops in January along the disputed borders.

China and India began to pull back troops, tanks, and other equipment from the banks of Pangong Tso, a glacial lake in the Ladakh region, that became a flashpoint in the prolonged border dispute after reaching an agreement to do so this month.