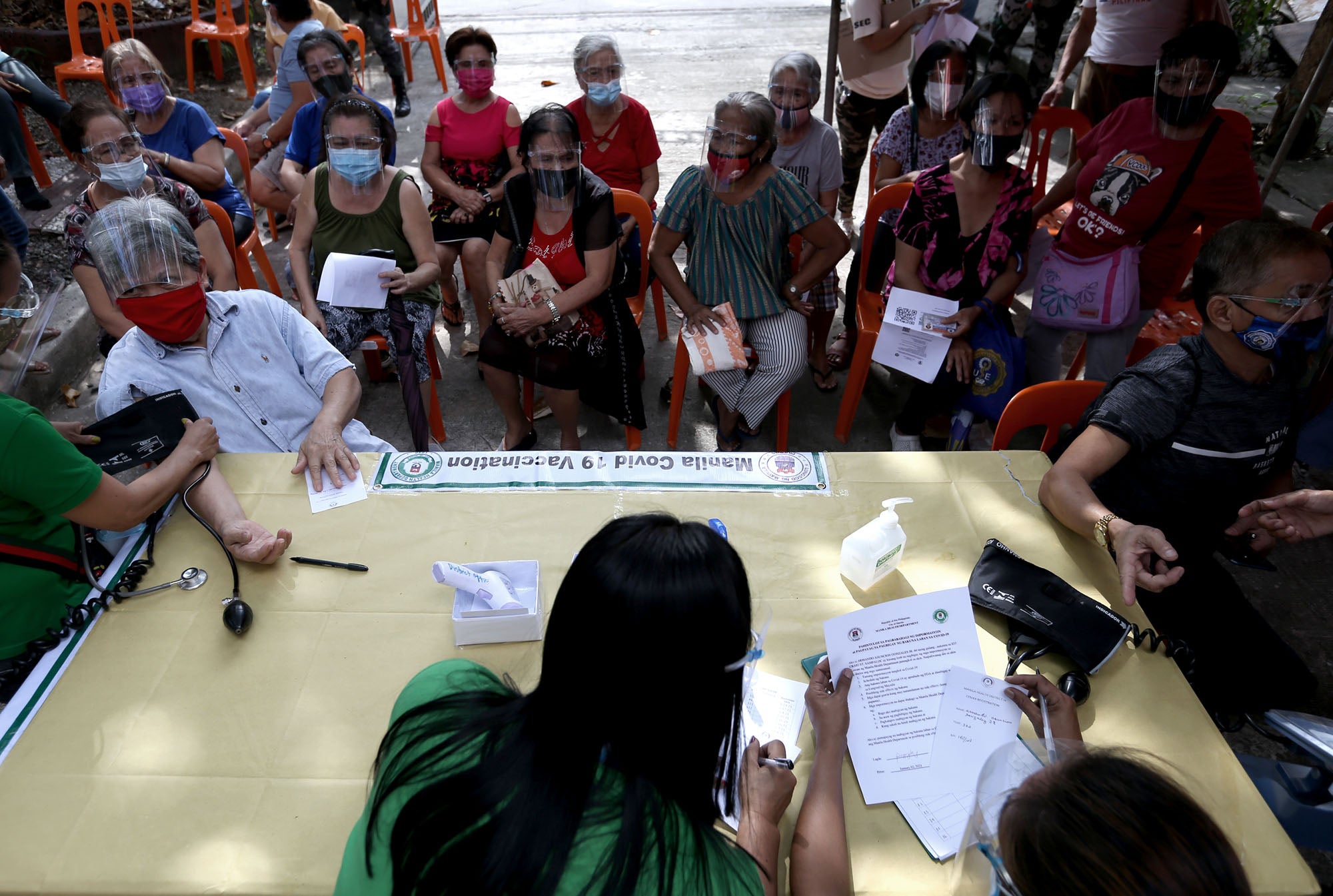 MOCK VACCINATION About a hundred elderly people take part in a dry run of COVID-19 vaccination at Legarda Elementary School in Manila on Thursday. The practice is held in preparation for the rollout of Pfizer and Sinovac vaccines expected to arrive this month, but the deliveries will be delayed due to paperwork for indemnification required by the World Health Organization-led vaccine pool for Pfizer and by China’s requirement of emergency use authorization for Sinovac. —RICHARD A. REYES

The delivery of Pfizer and Sinovac COVID-19 vaccines to the country, scheduled for this month, is facing more delays.

Agreement not sent out

The Pfizer-BioNTech agreement has not been sent out to any of the countries involved in the early rollout, Abeyasinghe said.

He said COVAX and the GAVI vaccine alliance were working closely with Pfizer-BioNTech to make sure it would send out the indemnification agreement.

The indemnification agreement would absolve manufacturers of liability in case of adverse effects of vaccines, which have been authorized only for emergency use.

Galvez said there were two kinds indemnification agreements for COVAX, a generic one and a specific indemnification clause that must be signed by both the manufacturer and the Philippine government.

He noted that the delay in the delivery of vaccines from COVAX is not just in the Philippines but worldwide.

The Philippines is expecting an initial delivery of 117,000 doses of the Pfizer-BioNTech COVID-19 vaccine from COVAX this month. These were supposed to arrive mid-February but were delayed, with officials citing the need to sign the indemnity agreements.

The Philippines is also awaiting the delivery of 600,000 doses of the Sinovac vaccine donated by China, but these may no longer arrive on Feb. 23 as had been expected.

China would deliver the vaccines to the Philippines only if the drug maker, Sinovac Biotech, got an emergency use authorization from the Food and Drug Administration (FDA), according to presidential spokesperson Harry Roque.

“I have received information that unless the [emergency use authorization] is delivered today, the delivery on the 23rd may be delayed,” Roque said.

But it would be better to wait for the permit so that the vaccines could be used immediately once these arrived, he said. And if the application for the permit is denied, then at least the Philippines knows it could not use the Sinovac vaccine, he added.

The FDA said it could not give a time frame for the grant of emergency use authorization to Sinovac.

“We are still evaluating their latest submissions. I can’t give a time frame until all submissions are evaluated,” FDA chief Eric Domingo told the Inquirer in a text message.

The delay triggered comparison between the Philippines and the poorer South Asian country Bangladesh, which has already started vaccinating its citizens.

But Galvez said the vaccines used in Bangladesh were donated by its neighbor India.

“We cannot inject donated vaccines without an [emergency use authorization],” he said.Despite these developments, Galvez said he believed it was still possible for the country’s vaccination drive to start this month. “Realistically, February is still possible,” he said.

The emergency use authorization for Sinovac could be issued and the COVAX vaccines could be delivered, he said. Galvez said his team would meet with officials from Pfizer Global on Friday.

As for the AstraZeneca vaccine, he said his team was negotiating with AstraZeneca Philippines, expecting that the vaccines to be procured by the government and those to be donated through COVAX would be supplied by AstraZeneca Thailand.

The team, however, learned a few days ago that the vaccines would come from AstraZeneca South Korea instead.

Galvez said Serum Institute of India, which also manufactures the AstraZeneca vaccine, was ready to supply the Philippines, but it was following a manufacturing system that had designated countries to supply.

“This means there is a supply problem,” he said.

Under the government’s plan, the initial rollout of the vaccines is expected in the first quarter of the year, with workers in government-run hospitals, elderly people, and uniformed personnel as the priority groups.

Some 5 million to 10 million doses are expected to arrive in the first two quarters of the year, Galvez said. The full rollout is scheduled in the third quarter, when the bulk of the vaccines is expected to be delivered.

The government aims to vaccinate 50 million to 70 million Filipinos by the end of the year.

Galvez also said there was still time to train vaccinators for the rollout since the vaccines would not arrive in the country at the same time.

He said he had directed local governments to prepare vaccination sites and to recruit and train people to administer the vaccines. —WITH REPORTS FROM MARICAR CINCO, PATRICIA DENISE M. CHIU AND JEROME ANING