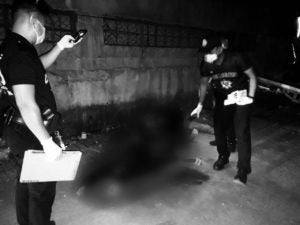 MANILA, Philippines — Two robbery suspects were killed in an encounter with the police in Quezon City on Thursday.

The TMRU operatives pursued the motorcycle-riding suspects, who fired at the lawmen.

The chase ended at an alley along Nokia Street in Barangay Commonwealth where two of the armed men were killed while two others managed to escape.

The shoulder bag was returned toa 27-year-old woman, who was robbed by the four armed suspects at the restaurant.

Prior to the robbery at the restaurant, police also received report that the four suspects were involved in a robbery near the Diliman Doctors Hospital along Commonwealth Avenue on Wednesday at 8:30 p.m.

The victim, a 33-year-old rider, parked his motorcycle near the hospital when the suspects seized his vehicle at gunpoint.

The motorcycle and other belongings of the victim were later recovered.

Further investigation and pursuit operations are ongoing to identify the remaining suspects.