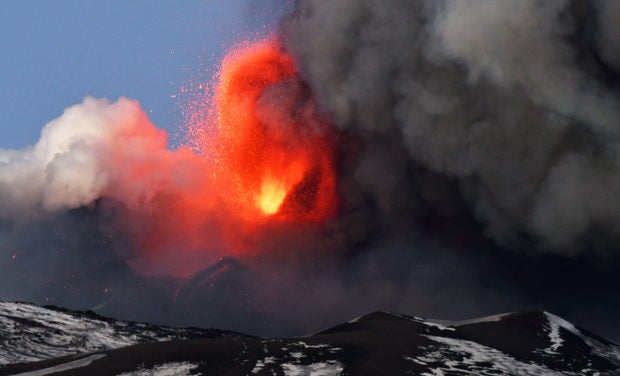 This photo obtained from Italian news agency ANSA shows the Etna volcano in Catania, Sicily, on February 16, 2021, during a spectacular eruption and a strong explosive activity from the south-east crater and the emission of a high cloud of lava ash that disperses towards the south. (Photo by Handout / ANSA / AFP) / Italy OUT

Rome, Italy — Mount Etna, one of the world’s most active volcanoes, belched smoke and ashes in a new eruption on Tuesday, but Italian authorities said it posed no danger to the surrounding villages.

“We’ve seen worse,” the head of the INGV National Institute for Geophysics and Vulcanology in the nearby city of Catania, Stefano Branco, told Italian news agency AGI.

Estimating that the eruption from Etna’s southeastern crater began late Tuesday afternoon, Branco insisted that the latest burst of activity was “not at all worrying”.

The emergency authorities said on their Twitter account that they were monitoring the situation closely in the three villages at the foot of the volcano — Linguaglossa, Fornazzo, and Milo.

Images showed a spectacular rose-colored plume of ashes above the snow-capped summit, but the cloud had largely dissipated by nightfall, while lava flows continued to glow.

Read Next
Pangasinan asks LTFRB to let buses operate again
EDITORS' PICK
Acer starts the year off strong with the Aspire Vero National Geographic Edition
Over 3 Million worth of prizes to be won at Smart Padala’s SENDali Manalo Promo!
COVID-19 cases in City of Manila are decreasing, says OCTA
DOH: Too early to say COVID-19 cases are declining
The best of bayside and city living at SMDC’s Sail Residences
Gov’t rolls out COVID-19 vaccination in select pharmacies on Jan. 20 to 21
MOST READ
Comelec junks petition to scrap Bongbong Marcos COC
In Batanes, octogenarian dies of COVID-19
Marcos Jr. visits Cebu, stands as ‘ninong’ to mayor’s son
When to get boosters after positive COVID test
Don't miss out on the latest news and information.