UN council to vote on Syria amid new assault 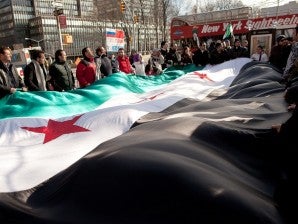 Demonstrators against Syrian President Bashar Assad hold a massive Syrian flag and chant outside the United Nations a day after fresh violence was reported in the embattled nation, Saturday, Feb. 4, 2012, in New York. European envoys to the Security Council said they would vote Saturday on a draft resolution backing an Arab League call for Assad to step down amid talk that Russia would ask for a delay. AP/John Minchillo

UNITED NATIONS — European envoys to the Security Council said they would vote Saturday on a draft resolution backing an Arab League call for Syrian President Bashar Assad to step down amid talk that Russia would ask for a delay.

The ambassadors spoke as they headed into an unusual weekend session. The urgency was heightened by an assault by Syrian forces firing mortars and artillery on the city of Homs. Activists said more than 200 people were killed in what they called one of the bloodiest episodes of the uprising. The U.N. says more than 5,400 people have been killed more than almost 11 months in a government crackdown on civilian protests.

Although Western nations were pressing for a vote, there was no guarantee the resolution would pass.

Russian Foreign Minister Sergey Lavrov said Saturday at a security conference in Munich that Moscow still saw two problems of “crucial importance” with the draft resolution on the violence in Syria. Western countries have been working to head off a possible Russian veto if the resolution goes to a vote.

But patience among some nations was running out.

“We are really in the end game,” German Ambassador Peter Wittig said. “There should be no more foot dragging. The events in Homs are really terrible.”

“Russia will ask for a delay, but we will be voting today,” British Ambassador Mark Lyall Grant said.

“Now, it’s over,” agreed French Ambassador Gerard Araud. “This text is simple. We support the Arab peace plan. Nothing more, nothing less and we vote today.”

Russian Ambassador Vitaly Churkin told reporters before entering the meeting that he had asked for a meeting of all Security Council ambassadors before any vote was taken, but provided no other specifics. The council began meeting shortly after 10 a.m. (1500 GMT) behind closed doors.

It was not immediately clear if the meeting would be opened later, or when a vote might be called.

In Germany, Lavrov said the resolution makes too few demands of anti-government armed groups, and that Moscow remains concerned that it could prejudge the outcome of a national dialogue among political forces in Syria.

Lavrov was quoted by Russian news agencies as saying that he and Russia’s foreign intelligence chief, Mikhail Fradkov, will meet with Assad in Damascus on Tuesday.

Syria has been a key Russian ally since Soviet times and Moscow has opposed any U.N. call that could be interpreted as advocating military intervention or regime change.

President Barack Obama urged the Security Council to take a stand against Assad’s regime and back the resolution.

“The international community must work to protect the Syrian people from this abhorrent brutality,” Obama said in a statement issued by the White House.

In a blistering statement, Obama said Assad had displayed “disdain for human life and dignity” following the weekend attacks in Homs.

“The Syrian regime’s policy of maintaining power by terrorizing its people only indicates its inherent weakness and inevitable collapse,” Obama said. “Assad has no right to lead Syria, and has lost all legitimacy with his people and the international community.”

To the Syrian people, Obama pledged U.S. support and vowed to work with them to build a better future in their country.

Secretary of State Hillary Rodham Clinton made clear during a meeting with Lavrov on the sidelines of the security conference that the United States strongly believes the council should vote during the Saturday session, a senior State Department official said.

The official, speaking on condition of anonymity because of the sensitivity of the matter, said they had a “very vigorous discussion.”

In an interview broadcast earlier Saturday on Russian state television, Lavrov warned that Moscow is prepared to use its veto power if several amendments it has submitted are not included in the European-Arab draft of the resolution.

“If they want another scandal at the U.N. Security Council, we wouldn’t be able to stop them,” Lavrov said, voicing hope that Washington wouldn’t put the draft to a vote without Russia’s amendments.

“The scandal is not to act. The scandal would be to fail to act,” Wittig, Germany’s U.N. envoy, said before Saturday’s session.

Russia and China have used their veto powers as permanent council members to block previous Western attempts to condemn the violence in Syria.

Russian news agencies quoted Lavrov upon his return to Moscow later Saturday as saying that the amendments are not “excessive” and that consensus on the resolution remained possible “if our colleagues show a constructive approach.”

“Colleagues have promised to look again at our amendments,” said Lavrov. “We shall wait for New York to wake up and keep working.”

But U.S. Ambassador Susan Rice told reporters as she headed into the council session that Russia’s proposed amendments are “unacceptable.”

Foreign Minister Alain Juppe of France, a firm backer of U.N. action and also a permanent Security Council member, said the latest outbreak of violence in Syria “underlines the urgency that the U.N. Security Council must break its silence to denounce the authors of this crime.”

“The international community must recognize and support the right of the Syrian people to freedom, to security and to the choice of its political future,” Juppe said. “Those who block the adoption of such a resolution are taking a grave historical responsibility.”

Associated Press writers Matthew Lee and Geir Molson in Munich and Vladimir Isachenkov in Moscow contributed to this report.