PNP to deploy more cops if situation in Taal worsens 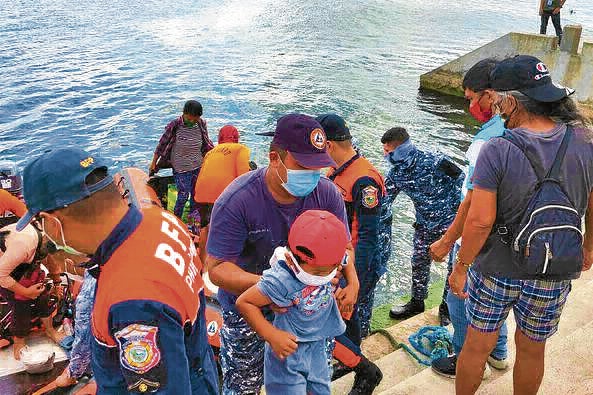 OUT OF HARM’S WAY A team composed of Coast Guard personnel, firemen and policemen ensures that people still on Taal Volcano Island will be out of harm’s way as the area remains under Alert Level 1 (abnormal status). —PHOTO FROM FACEBOOK PAGE OF PHILIPPINE COAST GUARD

MANILA, Philippines — The Philippine National Police (PNP) on Wednesday said it will deploy additional police units to augment Calabarzon police force in case the situation at the Taal Volcano in Batangas province worsens.

“For now, the troops in PRO4A [Police Regional Office 4A] are readying themselves for possible [immediate] deployment,” PNP spokesman Brigadier General Ildebrandi Usana said in a statement to reporters when asked if Philippine police will be ready to assist areas that would be affected by the Taal Volcano unrest.

As of Wednesday, state seismologists documented 69 tremor episodes that lasted from one to five minutes in the volcano, which is placed under Alert Level 1 .

The Philippine Institute of  Volcanology and Seismology (Phivolcs) also recommended to ban entry to the Taal Volcano Island, Taal’s Permanent Danger Zone or PDZ, especially in the vicinities of the main crater and the Daang Kastila fissure.

On Tuesday, residents in Taal island were forced to leave their homes because of the volcano’s “slightly increased activity.”

In 2020, Metro Manila police force also deployed additional personnel to help in relief and rescue operations in Batangas when Taal Volcano erupted and caused immediate evacuation of its residents.

Inquirer calls for support for the victims of Taal volcano eruption
Responding to appeals for help, the Inquirer is extending its relief to the families affected by the recent eruption of Taal volcano.
Cash donations may be deposited in the Inquirer Foundation Corp. Banco De Oro (BDO) Current Account No: 007960018860.
Inquiries may be addressed and emailed to Inquirer’s Corporate Affairs office through [email protected]nquirer.com.ph.