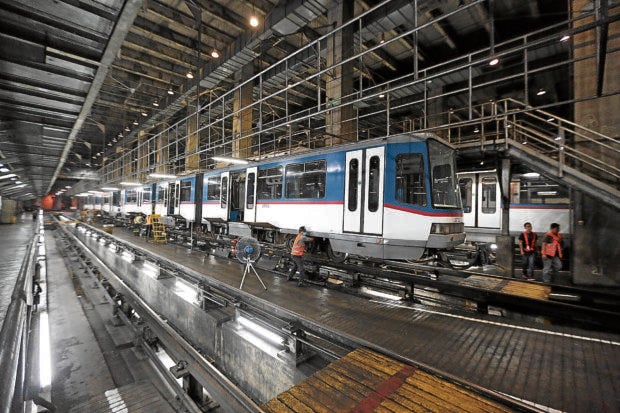 CLUSTER Workers at theMRT3 depot are among those who contracted COVID- 19. Metro Manila’s first UK variant case has been linked to the cluster of infections atMRT3. —GRIG C. MONTEGRANDE

MANILA, Philippines — The 46-year-old mother of an employee of Metro Rail Transit 3 (MRT 3) is believed to be the first known COVID-19 case with the UK variant in Metro Manila.

She is also one of the 44 detected cases so far of the B.1.1.7 coronavirus variant that was first discovered in the United Kingdom late last year and said to be 75 percent more contagious but not necessarily more deadly.

Health Undersecretary Maria Rosario Vergeire on Monday said the first case was linked to the recent clustering of infections among MRT personnel.

The woman from Pasay City tested positive for COVID-19 on Jan. 25, and remains in home quarantine.

She is among the 19 new UK variant cases reported by the Department of Health (DOH) on Friday, which brought to 44 the UK variant cases identified through genome sequencing by the University of the Philippines-Philippine Genome Center.

The DOH has not declared a community transmission of the UK variant.

More specimens nationwide from COVID-19 positive cases need to be sequenced before the DOH can determine if there is already community transmission of the UK variant here, Vergeire said.

Some regions in the Visayas and Mindanao were unable to submit specimens because of lack of transportation, Vergeire said. “So we still can’t give that information for community transmission because we do not have sufficient evidence to say such.”

The country’s first known UK variant fatality was an 84-year-old resident of La Trinidad, Benguet province, who seldom left home. The patient died in the third or fourth week of January, the DOH said.

Earlier, Vergeire said declaring community transmission of the UK variant would mean cases were already widespread and the source of the virus variant could no longer be identified.

The DOH said the Philippine Genome Center had been analyzing selected samples from regions nationwide and in areas where spikes in COVID-19 cases had been reported.

Vergeire said that so far, 169 close contacts of the 19 newly identified UK variant cases had been located—107 in Davao region, 12 in Mountain Province, and 50 in Ilocos Norte province.

She said the swab results would come out this week.

It was unclear on Monday whether the 19 new UK variant cases included the Ilocos Norte resident who returned from Bahrain in January and tested positive for the British strain when the patient returned to the province last week.

Dr. Rina Corpuz, a quarantine consultant in Ilocos Norte, said the patient had completed a mandatory 14-day quarantine in Metro Manila and was considered a “recovered case.”

The patient is in quarantine in Laoag City. Dr. Norman Rabago, a provincial consultant for COVID-19, said a search for the patient’s contacts had started.

On Monday, the DOH logged 1,685 additional coronavirus infections, bringing the overall number of confirmed COVID-19 cases in the country to 550,860.

The DOH confirmed the deaths of two more patients who had been previously tagged as recovered, raising the death toll to 11,517.

Fourteen more patients had recovered, bringing the total number of COVID-19 survivors to 511,755.

The deaths and recoveries left the country with 27,588 active cases, of which 88.6 percent were mild, 6.9 percent asymptomatic, 0.86 percent moderate, 2.8 percent severe, and 2.8 percent critical.

—With a report from John Michael Mugas