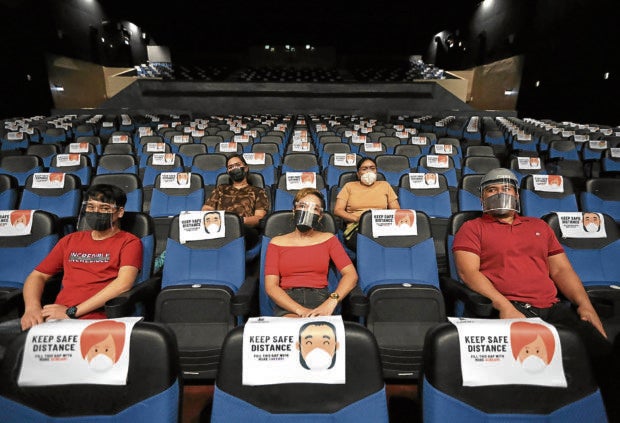 SHOW MUST GO ON? A movie theater in Bacoor, Cavite, opens its doors to the public after the Inter-Agency Task Force for the Management of Emerging Infectious Diseases allowed movie houses to reopen in general community quarantine areas. —MARIANNE BERMUDEZ

Health experts also have reservations about reopening enclosed leisure establishments and want more specific measures from the government on how to go about easing the restriction.

The Inter-Agency Task Force for the Management of Emerging Infectious Diseases, the temporary government body overseeing the Duterte administration’s coronavirus response, has decided to allow the reopening of indoor leisure establishments, such as movie houses and game arcades, to boost economic recovery. The decision takes effect on Monday.

But the 17 mayors of Metro Manila oppose the task force’s decision, saying the reopening of such establishments, especially movie houses, might worsen the spread of the new coronavirus in the metropolis.

Parañaque City Mayor Edwin Olivarez, head of the Metro Manila Council, said on Saturday that the task force made the decision without consulting the officials of the capital region.

Movie houses in areas under the more relaxed modified community quarantine will be allowed to sell 75 percent of their seats.

On Sunday, two health experts expressed reservations about the idea.

Dr. Antonio Dans of the Health Professionals Alliance Against COVID-19 viewed the task force’s decision as “businesscentric.” He said it might only put more people at risk.

Dr. Rontgene Solante, an infectious disease expert at San Lazaro Hospital in Manila, said that while the number of COVID-19 infections had been “stabilized” between 1,500 and 2,000 daily, it was still far from going down.

Why option to gather?

Interviewed separately by phone on Sunday, the two doctors asked why the public should be given an option to gather, especially in indoor venues like movie houses and game arcades where the risk of transmission is higher due to lack of air ventilation.

“You’ll be [spending a] longer time [inside] watching a movie that runs for at least an hour. You’ll be eating and talking,” Solante said, adding that it really did not matter that the audience was limited to half of the normal theater capacity unless people kept their masks on.

He said churches with wide open doors and windows were fine, but worried about the smaller, air-conditioned chapels.

“What’s crucial in the US and Korea during the first few months [of the pandemic] was the loud singing [during church services],” Solante said.

Museums may reopen, but with controlled visitor traffic, he said.

“I hope [the task force] considers those,” he added.

“When you lighten the quarantine, you’re trusting people to protect themselves. You should enable them to do so, like when sending soldiers to war with proper [weapons],” he said.

Dans said to open up the economy, the government must first focus on things like public transportation and stronger contact-tracing systems across the country.

From P13B to P1B industry

Before the pandemic, Lopez said, the local film industry was worth P13 billion. “[The] industry said this [shrank] to P1.3 billion in 2020,” he said.

But Vice President Leni Robredo, noting the Metro mayors’ objection to the new reopenings, asked whether the task force’s decision was backed by science.

Had Malacañang listened to her advice before that local officials be included in the task force’s decision-making, Robredo said, the government would not now be making decisions unacceptable to local governments.

“We understand that it’s important to reopen the economy, but as we have seen [in June], when we reopened the [shopping] malls, nobody is going around because many people are still scared,” Robredo said on her weekly radio program.

“The only effective way to reopen the economy is to [contain] transmissions and the number of cases and to secure vaccines,” she added.

The Philippines has been seeing a spike in new coronavirus infections in recent days. On Sunday, the Department of Health (DOH) reported 1,928 additional infections, raising the overall number of confirmed COVID-19 cases in the country to 549,176.

The DOH said eight more patients had died, bringing the death toll to 11,515. It pronounced 10,967 people who had completed a 14-day quarantine as recovered, pushing the total number of COVID-19 survivors to 511,743.

The deaths and recoveries left the country with 25,918 active cases, of which 86 percent were mild, 7.2 percent asymptomatic, 0.91 percent moderate, 2.9 percent severe, and 3 percent critical.