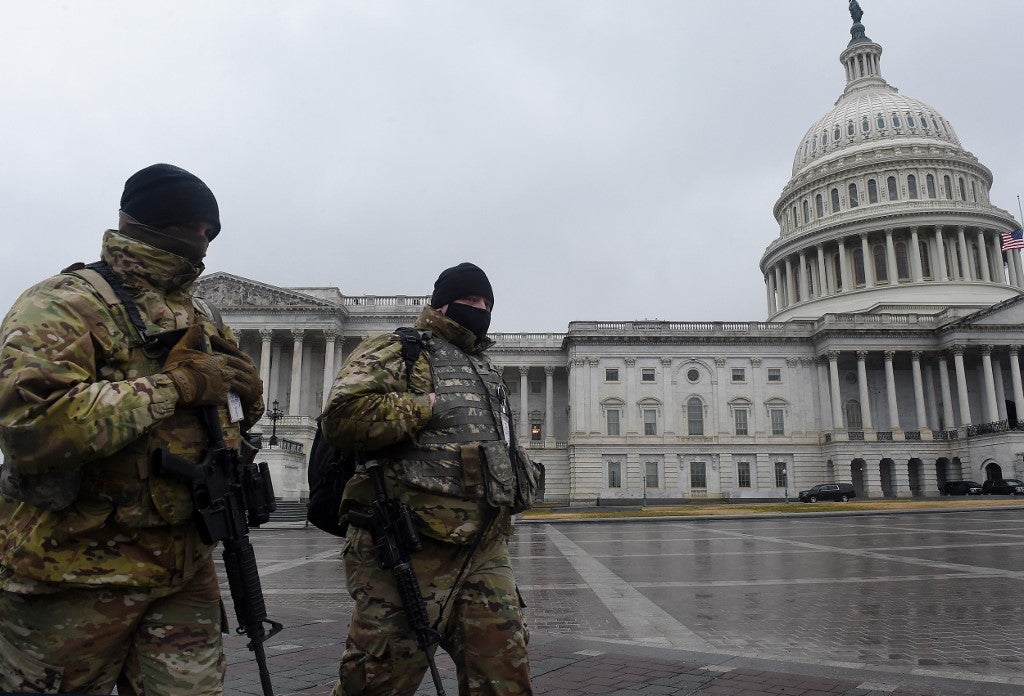 Members of the National Guard walk past the US Capitol during the second impeachment trial of former President Donald Trump in Washington, DC, February 11, 2021. (Photo by OLIVIER DOULIERY / AFP)

WASHINGTON — The tradition-bound US Senate has sat in judgment of presidents before, including Donald Trump last year, but this week’s prosecution, with its hours of chilling video aired before dismayed lawmaker-jurors, marks a first — an impeachment trial for the digital age.

Senators found themselves in unquestionably new territory. Republicans and Democrats bristled, teared up and sat in awe, watching images the likes of which have never been shown in the chamber over its 230-year history — thanks to the technological advancements of the modern world.

Video screens and audio equipment were set up in the Senate beginning Tuesday so its 100 members could take in the graphic imagery and sounds of the deadly chaos that unfolded on January 6 when rioters stormed the US Capitol after a speech given by Trump earlier in the day.

Authorities say they have compiled thousands of hours of footage from people who invaded the Capitol and did something millions of Americans do every day: filmed themselves and the action around them.

Those clips — along with newly revealed security camera videos and footage of the former president’s own speeches and campaign rallies — have become the crux of the Democrats’ evidence as they make the case that Trump incited an insurrection.

Many observers are calling the trial must-see TV.

The normally sedate, dignified atmosphere of the hidebound Senate was shattered by the haunting footage of insurrectionists running through the halls of Congress hunting then-vice president Mike Pence, and the arresting audio of F-bombs and other profanity shouted by rioters, police, even lawmakers.

“I had never seen myself in that tape they showed.”

Security footage aired during the trial Wednesday showed Schumer and other senators fleeing for their lives, guided by their security details away from mobs baying their fury.

“I’m hopeful it will change minds. It’s hard to look at that and not see the gravity of what happened.”

House impeachment managers are still mulling whether to call witnesses, but perhaps the most compelling evidence has already been heard and seen in the footage that has kept the senator-jurors and viewers rapt.

Senator Mitt Romney said he was shocked watching video of himself doing an about-face and running for his life when a police officer guided him away from a mob approaching the Senate chamber.

“It tears at your heart and brings tears to your eyes,” Romney told reporters, saying it was “overwhelmingly distressing and emotional” to watch those critical moments on screen.

The Senate, in many ways an archaic institution, embraces inertia. It only allowed C-Span’s TV cameras to begin recording the chamber’s daily proceedings in 1986, six decades after the advent of television.

Video has been shown in impeachment proceedings before, however. Digital slides, graphics and some video were shown at Trump’s 2020 Senate trial.

And the 1999 impeachment trial of Bill Clinton featured excerpts of videotaped depositions including one by Monica Lewinsky that played before the senators, in what the US Senate Historical Office said was the first video presentation in the chamber.

But while the Clinton-era excerpts may have been sensational in their own right, they were worlds apart from this week’s harrowing imagery.

In a clip that required an impeachment manager to issue a warning, the Senate viewed the moment a woman was fatally shot by police as she breached a door steps from the House chamber.

Trump’s tweets have also been repeatedly put up on screen and used as evidence against him — a problem that neither Clinton nor Andrew Johnson, who was impeached and acquitted back in 1868, had to endure.

But the footage of invaders breaking into the Senate chamber, rifling through the desks and standing on the rostrum is no doubt a personal gut punch for the senators.

House impeachment manager Diana DeGette aired such images Thursday, including a chilling note that a rioter left for Pence, who was evacuated minutes earlier.