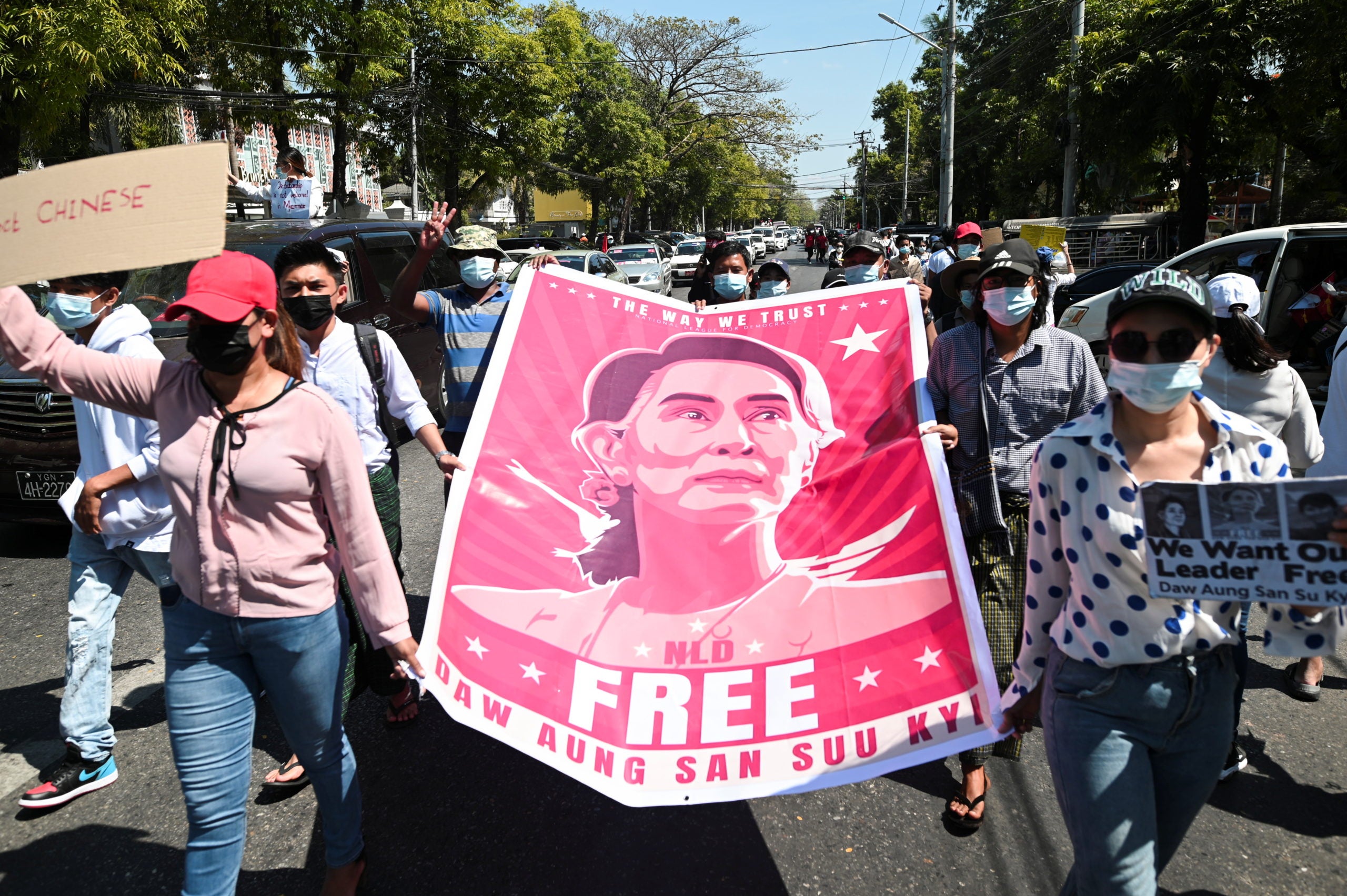 People gather outside the Chinese Embassy as they protest against the military coup and demand the release of elected leader Aung San Suu Kyi, in Yangon, Myanmar, February 11, 2021. REUTERS/Stringer

Myanmar’s new junta leader on Thursday called on civil servants to return to work and urged people to stop mass gatherings to avoid spreading coronavirus, as the sixth day of protests against him and his coup spanned the Southeast Asian country.

As Washington moved a step closer to imposing sanctions on Min Aung Hlaing and his fellow generals, Britain said it was also considering measures it could apply to punish the Feb. 1 takeover that halted an unsteady transition to democracy.

The coup and the detention of elected leader Aung San Suu Kyi along with scores of others have prompted the biggest demonstrations since a 2007 “Saffron Revolution” that ultimately became a step towards democratic reforms.

Senior General Min Aung Hlaing addressed the protests for the first time in public, blaming “unscrupulous persons” for work stoppages in a growing civil disobedience movement by medics, teachers, railway workers, and many other government employees.

“Those who are away from their duties are requested to return to their duties immediately for the interests of the country and people without focusing on the emotion,” he said.

In a statement issued by the army’s information service, he also urged people to avoid gatherings, which he said would fuel the spread of the coronavirus.

Protesters gathered across the country on Thursday.

Hundreds of workers lined a road in the capital Naypyitaw, chanting anti-junta slogans and carrying placards supporting Suu Kyi. Thousands demonstrated in the main city of Yangon, some taking a humorous approach, such as men dressed in short skirts.

“What a joke! He must be completely delusional to ask people who are protesting against him to come back and work,” said one Twitter user, who identified as Nyan Bo Bo, in response to Min Aung Hlaing’s statement.

Hundreds of protesters also demonstrated outside the Chinese embassy, accusing Beijing of supporting the military junta despite Chinese denials. They held up pictures of Suu Kyi to demand her release.

The military launched the coup after what it said was widespread fraud in a November election, won by Suu Kyi’s National League for Democracy (NLD) in a landslide. The electoral commission had rejected those claims.

Former minister Kyaw Tint Swe, regarded as her right-hand man, was arrested in another sweep overnight, a senior NLD official said. He had been one of her representatives in crunch talks with the military before the coup.

NLD information committee member Kyi Toe said Kyaw Tint Swe and four other people linked to the previous government had been taken from their homes overnight, and the top leadership of the former electoral commission had all been arrested.

Myanmar authorities did not immediately respond to a request for comment and Reuters was unable to confirm the arrests independently.

The Assistance Association for Political Prisoners rights group said at least 220 people had been arrested since the coup.

The protests have revived memories of almost half a century of direct army rule, punctuated by bloody crackdowns until the military began relinquishing some power in 2011.

U.S. President Joe Biden on Wednesday approved an executive order for new sanctions on those responsible for the coup.

“The military must relinquish the power it seized and demonstrate respect for the world and the people of Burma as expressed in their November 8th election,” he said.

Washington would identify the first round of targets this week and was taking steps to prevent the generals in Myanmar, also known as Burma, having access to $1 billion in Myanmar government funds held in the United States.

Min Aung Hlaing and other top generals are already under U.S. sanctions imposed in 2019 over abuses against Rohingya Muslims and other minorities.

Britain was also “urgently looking” at further measures it could apply to its former colony, Foreign Secretary Dominic Raab said.

“The international community will not accept the coup in Myanmar and we will hold those responsible to account,” he said.

The United Nations’ top human rights body is to consider a resolution on Friday drafted by Britain and the European Union condemning the coup and demanding urgent access for monitors.

However, diplomats said China and Russia – which both have ties to Myanmar’s armed forces – were expected to raise objections or try to weaken the text.

Suu Kyi, 75, won the 1991 Nobel Peace Prize for campaigning for democracy and remains hugely popular at home despite damage to her international reputation over the plight of the Rohingya.

She spent nearly 15 years under house arrest under previous juntas. Her lawyer says he has not been allowed to see her.