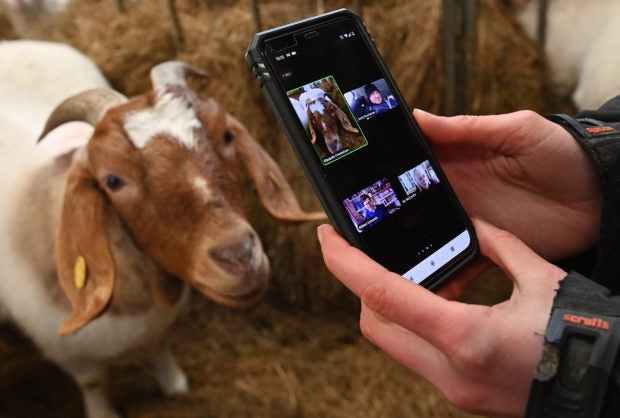 Farmer Dot McCarthy films one of her goats for a zoom call at Cronkshaw Fold Farm, Rossendale, northwest England on February 9, 2021. – McCarthy came up with the jokey idea of renting out her goats to liven up video calls and found an unexpected source of lockdown income. The floppy-eared goats glance curiously as farmer Dot McCarthy holds up a mobile phone to film them as they eat hay in a barn. (Photo by Paul ELLIS / AFP)

Blackburn, United Kingdom — A British farmer came up with a jokey idea to rent out her goats to liven up video call meetings — and found an unexpected source of lockdown income.

The floppy-eared goats glance curiously as farmer Dot McCarthy holds up a mobile phone to film them eating hay and prancing around in a barn.

The video of the goats appears on a Zoom call as three other participants smile and McCarthy tells them the goats’ names.

Meanwhile, a farm employee is filming another goat in a simultaneous call.

Cronkshaw Fold Farm in Lancashire, northwestern England, offers a five-minute appearance by a goat on any video-calling platform for £5 (nearly $7, 6 euros).

Customers have their choice of seven different goats on the farm’s website, from “highest-ranking nanny” Margaret to cute brown-and-white kid Lulu.

“Say you’re doing a video call with work or whatever, or maybe a really long family call and it’s getting a bit boring,” McCarthy says.

“You can book a goat to join you in the meeting and just see if any of your colleagues notice.”

And business is thriving, the 32-year-old farmer says.

“This started as a joke — putting goats on video calls to prank people in their work routines — and it’s just gone a bit crackers, really.”

Since it started offering the service nearly a year ago, the farm has earned £50,000 pounds, “which is crazy,” she adds.

The small family farm also has sheep and chickens.

Before Covid hit, it had diversified with various side businesses such as conducting farm tours and sheepdog demonstrations, providing guest rooms, and even goat yoga.

The popularity of the goats on Zoom has allowed them to keep their jobs and also provide additional work for the local community, important in a rural area, she says.

At the same time, she is not giddy over the success of what she calls the “goat video call wave.”

“I’ve been saying this since the first lockdown, but I definitely think this is just a phase,” she says, laughing.

“But yeah, we’ll keep going — as long as people want goats, we will bring goats to the people.”