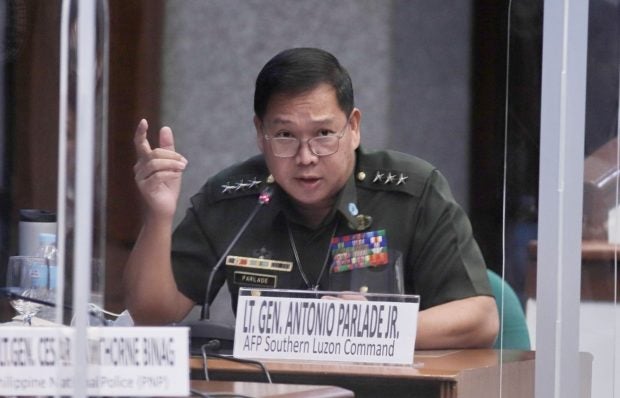 MANILA, Philippines — The chief of staff of the Armed Forces of the Philippines on Tuesday said he had directed the provost marshal general to look into the social media posts of Lt. Gen. Antonio Parlade Jr., the chief of the military’s Southern Luzon Command and spokesperson for an anti-insurgency task force.

Parlade was widely condemned by media groups and two prominent former members of the Supreme Court for brandishing the controversial antiterror law against Tetch Torres-Tupas, a reporter for Inquirer.net, who wrote about the alleged torture of two Aeta men accused of being communist rebels.

Parlade on Tuesday remained unapologetic for his Facebook posts that targeted Tupas and said the National Task Force to End Local Communist Armed Conflict (NTF-Elcac) was not involved in his “personal” comments.

He insisted that Tupas’ report, which was based on documents submitted to the Supreme Court, was wrong. An Army field commander had reported that the torture allegations had not been proven, according to the AFP spokesperson, Maj. Gen. Edgard Arevalo.

At Tuesday’s Laging Handa briefing, the AFP chief of staff, Lt. Gen. Cirilito Sobejana, said he had directed the chief provost marshal “to get in touch with the NTF-Elcac, particularly its strategic communications committee, and find out if what General Parlade has been saying in public is with the committee’s blessing.”

The provost marshal general is in charge of ensuring discipline and strict enforcement of rules, policies and regulations of the armed forces among military personnel.

Sobejana said he took the step on orders of Defense Secretary Delfin Lorenzana. He again reminded soldiers to be “very careful” about who they identify as communist rebels or sympathizers.

“The default is the public or everybody is our friend then as we do our job in a very deliberate manner we will find out who are the enemies of the state,” he said. “Then once they are accurately identified we have to exert our effort, with our strategy, our values, projects, activities and programs, to win over these threats to national security.”

After taking over as military chief last week, Sobejana said that in fighting the insurgency, it was better to make friends than enemies.

Parlade, however, held a different view from his superior, his classmate at the Philippine Military Academy.

“You choose your friends. It’s not a matter of having the most number of friends. If you end up taking care of a snake, you might as well don’t (make friends),” he said in a television interview.

He said his social media posts against Tupas were “citizen Parlade’s response” to what he called a “careless report.”

Parlade said he was not going to file a case against Tupas under the Anti-Terrorism Act of 2020 although he had said on Facebook it was “possible” to charge her with “aiding the terrorists by spreading lies.”

He said that even without the antiterror law, there were other laws that could hold her liable for “spreading false information which endangers the public order or cause damage in the interest or credit of the state.”

Parlade said he would not apologize to Tupas. “But personally, I have no intention to make Tetch feel threatened,” he said.